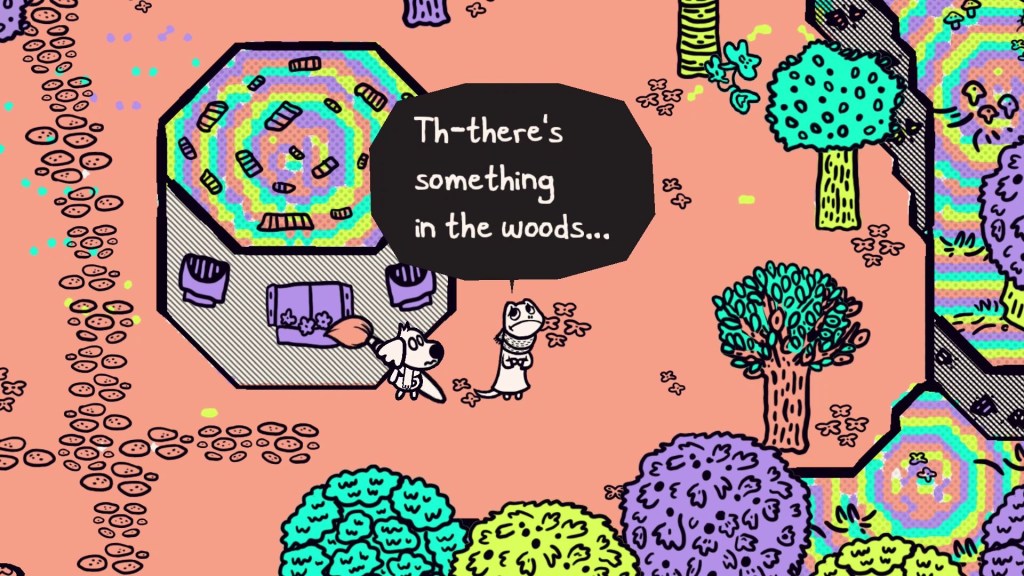 One of the best indie games of the year looks like an innocent cartoon adventure but its colouring book concept also has a darker edge.

Here’s a pro tip for indie developers: if you want your game to be noticed don’t release it during E3 week, especially if there’s no marketing or PR for it. The fact that Chicory: A Colorful Tale exists at all almost went completely under our radar but we’re very glad it didn’t because this is easily one of the best games of the year.

Chicory is the work of a team so small they don’t even seem to have given themselves a name. Just five people, led by director Greg Lobanov, made the game, although they include veterans of both Celeste and Night In The Woods – so these aren’t neophytes making their first game.

That explains how the game manages to feature both unique and engaging gameplay mechanics and a surprisingly thoughtful story, of the sort that is far more nuanced than almost any triple-A game and, importantly, manages to intertwine gameplay and story in a much more intriguing fashion.

Bringing colour to a black and white world is a relatively common trope for video games and features in everything from Ōkami to The Saboteur. Chicory starts with the titular artist going missing and your character, which you name after your favourite food, picking up her magic brush and trying to fill in for her – literally. With Chicory missing the world has turned to black and white and, worse, it’s being eaten away at the edges so that nothing at all remains.

The solution for the black and white issue is to use the brush to fill everything back in, but naturally it’s not as simple as that. In terms of level design and structure Chicory is closest to the 2D Legend Of Zelda games, with a similarly languid pace but less in the way of action. Things start off simply enough, with the ability to draw or erase one of four different colours. This can be used to do things like activate trampoline-like mushrooms or smash rocks, while later on you get the ability to swim through paint like Splatoon and light up darkened areas.

Rather than just filling in colour to make it come alive, as in Ōkami, the painting in Chicory is the key gameplay mechanic and while the puzzles are never impossibly difficult there’s some very clever problems that force you to think about using your limited array of tools in unexpected ways. The right stick is used to direct your artistic flourishes but in truth the controls, for both painting and movement, are somewhat clunky and it can often take a couple of tries to do exactly what you intended.

The cast of anthropomorphic critters is charming, as they proffer their own side quests and requests, with a range of stamps, patterns, and clothing your reward. All that is very much what you’d expect from a Nintendo-inspired puzzle adventure but the game’s artistic theme goes deeper than just the puzzles. You’re encouraged to paint simply for pleasure, with the other characters commenting on your efforts and the game trying to teach you actual painting techniques.

The whole concept seems to have been inspired by the fad of adult colouring books, of a year or two ago, and much of the more mellow entertainment comes from what is very much the video game equivalent – except here you can make your own GIFs as well, using a built-in editor.

The game’s most unexpected success (although perhaps not if you remember the involvement of a Celeste veteran) is how affecting the storytelling is. Your artwork is constantly subject to constructive criticism from the game’s menagerie of characters and how you and others deal with this becomes one of the game’s main themes, along with issues like being workaholic, coping with self-doubt, and even sexual identity.

If that seems odd for a game where you play a cartoon dog with a magic paintbrush it says a lot about video games that it’s actually far more common for such issues to be addressed in a low budget indie game, featuring abstract visuals, than the sort of triple-A title that can’t stop idolising its own overlong, uninteractive, cut scenes.

Chicory: A Colorful Tale review – paint your own adventure

Chicory doesn’t labour its messages and for the most part it’s exactly what it seems: a fun, original Zelda-esque adventure with a clever twist and endearing characters. But there’s a deeper meaning to both the mechanics and the story, something that can go almost unnoticed by those that are uninterested in such things, but which hits hard if the subject matter strays close to home.

Chicory: A Colorful Tale is one of the best indie games of recent years and certainly deserves to be spoken of in the same breath as the likes of Celeste and Night In The Woods. It has boss battles and even a local co-op mode, but more than that it has originality and heart. If there’s one benefit to it being released so close to E3 it’s that it shows how unimportant a big budget is to a game’s quality… and especially its artistic creativity.

In Short: A charming and imaginative spin on The Legend Of Zelda that is filled with cleverly original ideas and a deceptively serious script that packs a real punch.

Cons: The controls often lack precision, creating frustration when painting and in the more action-oriented moments.