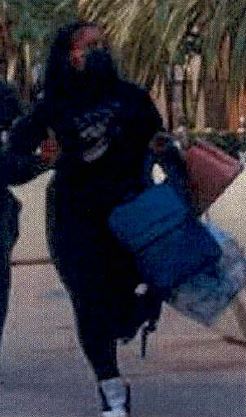 PALO ALTO, Calif. (KRON) — Police are looking for 11 suspects in a coordinated designer handbag heist at the Stanford Shopping Center.

The group got away with $100,000 worth of handbags from Louis Vuitton on Monday afternoon, according to the Palo Alto Police Department.

The theft happened around 5:30 p.m. The suspects were unarmed. They ran into the open store and grabbed 36 handbags before quickly running out, through the mall and fleeing in five different vehicles, the investigation revealed.

Police arrived after the fact.

The suspects were wearing face masks and were believed to be in their late teens or early 20s. Witnesses told police the five escape vehicles appeared to be: a gray Lexus sedan, a gray Infinity SUV, a white Audi sedan, a black four-door Hyundai sedan, and a red two-door Honda sedan.

Police said they will not be releasing surveillance video, but shared two photos of one of the suspects. A similar theft happened at the same mall back on May 19.