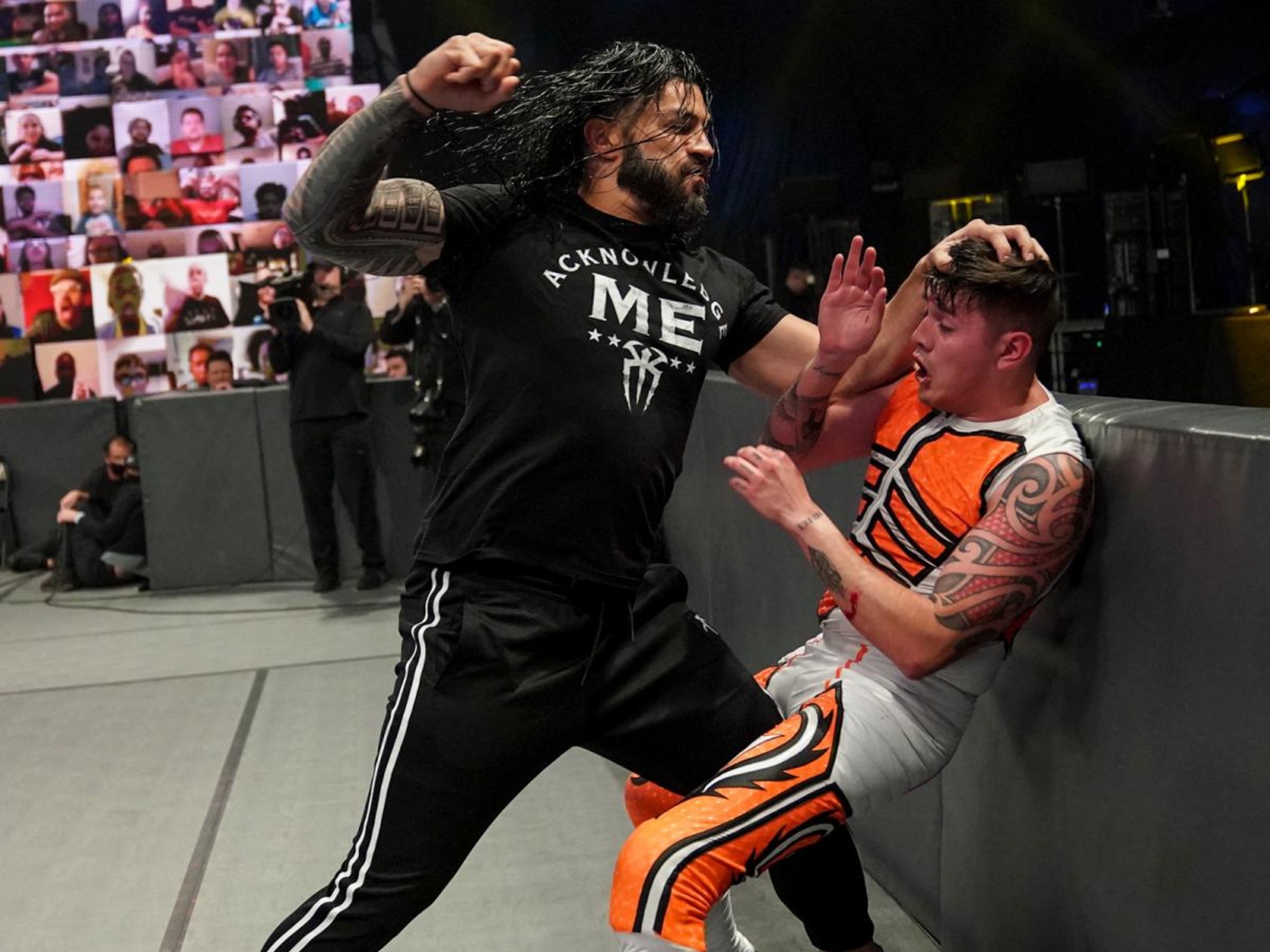 The Universal Champion absolutely decimating the father and son tag team champions at the end of the show after his cousins Jimmy and Jey Uso failed to capture the gold.

Once again, the blue brand put the focus on the Tribal Chief and his family – one of the absolute best stories in wrestling today – and reaped the benefits.

The night kicked off with Roman and his special counsel Paul Heyman as he warned the Usos that they needed to win the titles.

After a typically fantastic promo from Reigns, the first bout of the show gave his cousins a chance to make him happy with their tag title clash against Rey and Dominik.

There was no way the four men wouldn’t deliver in a big way, and they did just that – albeit not quite hitting the heights of Usos vs. Street Profits from last week.

Unfortunately for Jimmy and Jey, they fell short as Dominik won with a very, very dodgy roll-up – and not surprisingly, the Head of the Table wasn’t happy at all.

They didn’t have to wait long for their rematch after chatting to Adam Pearce and Sonya Deville, with both teams meeting again in the main event.

This wasn’t on the same level as the opener, but the focus was on the story really, with Reigns coming out to attack the Mysterios as they looked primed to retain the gold.

He absolutely battered the pair, choking out Dominik as Jimmy asked him to stop, before storming out of the ring and called on Jey to do the same.

Roman stopped him following his twin, and ended the show on a brutal note with a big powerbomb on Dominik.

Backstage, Seth Rollins refused to answer questions about Cesaro, while Chad Gable offered his help to Street Profits to get them back on track after some recent losses.

Later, Montez Ford and Angelo Dawkins tried to talk to Otis and get him to leave Alpha Academy, only for him to take out them both.

Elsewhere, Liv Morgan – who was going solo after Ruby Riott was released this week – lost to Carmella in quick fashion despite a new catchphrase and a chance to make a name for herself.

It’s a shame, because the former Riott Squad member could be something special for the women’s division if WWE gives her the chance.

Speaking of that scene, Bianca Belair challenged Bayley to a match and insisted she was annoyed by her rival’s laugh, which led to the Role Model taking over the ThunderDome to do just that.

Rick Boogs continued to be as entertaining as ever as he played Shinsuke Nakamura to the ring for his match with King Corbin.

The storyline has been focused on the latter’s crown, which the King of Strong Style has been wearing as of late.

They had a decent sprint, but the ending came out of nowhere with Corbin scoring a roll-up, only for his opponent to get some revenge with the Kinshasa before bolting with the crown.

Meanwhile, Kevin Owens was primed to face Apollo Crews for the Intercontinental Title without Commander Azeez at ringside.

However, the towering man took him out beforehand with a Nigerian Nail, giving the IC Champ a way to built early momentum over his opponent.

They had a decent bout which ended when Crews hit a Death Valley Driver onto the apron and led to a pinfall victory.

After the bell, Sami Zayn took out his long-running rival with a Helluva Kick, and seeing those two work it at Money In The Bank or SummerSlam is a welcome way to spend the next couple of months.