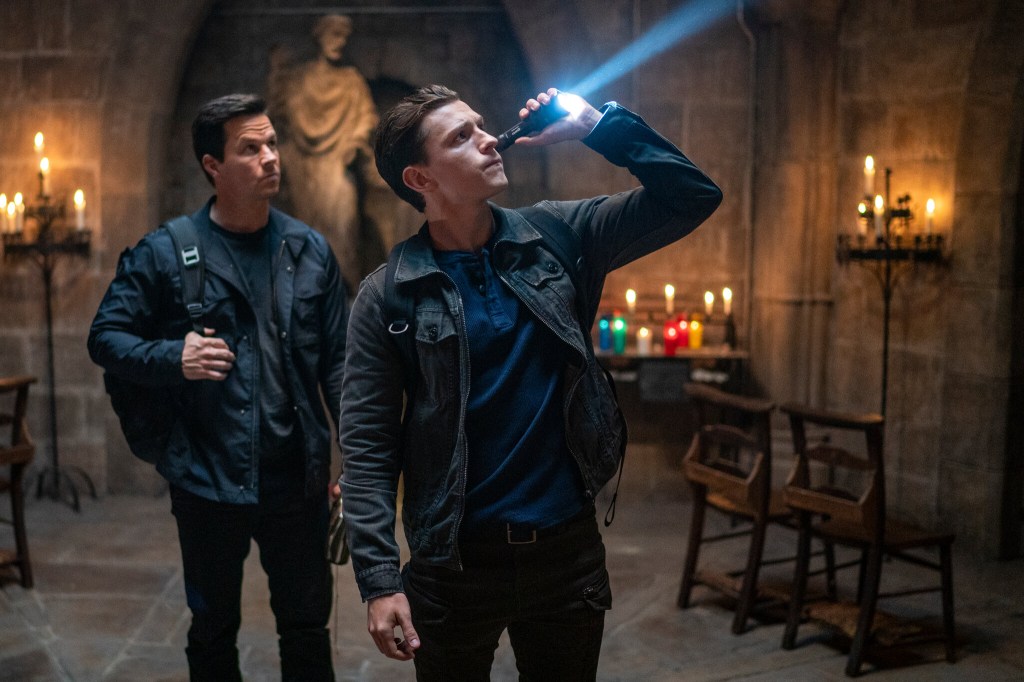 The Tuesday Inbox begins the Sonic cycle for the rumours of a new retro compilation, as one reader is unsurprised that Biomutant is a dud.

Young Nate
I’m curious to know if there’s anyone out there who thinks the Uncharted movie is going to be either good or anything like the games? I know you played young Nate for a bit in one (two?) of the games and Tom Holland is a charismatic actor, who will probably be able to pull off the quips, but there’s more to it than that. Nate is barely in shape/getting old and his relationships with the women in his life are all based on long experience and countless unseen adventures and events.

Tom Holland looks like he’s probably still on his first girlfriend and is never going to have that same cocky attitude around women, as well as that world weary experience. Obviously, that’s not going to effect the action scenes, and Tom Holland is a fairly famous star who’s probably quite a draw, but I just don’t see it being the same thing.

There’s his relationship with Sully as well, but that was an older brother kind of thing in the games, not a surrogate father, which this is obviously going to be. It just all seems like a bad idea and I don’t know why we need to add to the list of bad video game movies.
Grackle

Real cyberpunk
I know it’s only a vague rumour but I would love if Square Enix brought back Deus Ex. Mankind Divided was clearly meant to have at least one sequel and there was the whole Deus Ex Universe thing being set up before, you know, it turned out not many people bought the games.

I’ve been trying to work out whether Cyberpunk 2077 makes it more or less likely that there’d be a Deus Ex 3. If Cyberpunk had been the straight hit it was expected to be it probably would’ve but now that it’s been this weird semi-hit with a bad rep… I just don’t know.

Could a new Deus Ex be positioned as the ‘real’ Cyberpunk 2077, a superior alternative to what CD Projekt ended up making? I’m sure it must be a possibility that’s been suggested at Square Enix, so I’m hoping there might be some good news at E3.
Wodan

New challenger
I’m not sure what to think about Netflix wanting to get into games. They’re only talking about selling them at the moment, not making, so it doesn’t seem like they’re getting in to deep. I imagine Microsoft has already been on to them about xCloud and wouldn’t be at all surprised to see them do some sort of combined service.

One extra advantage that people often don’t credit Microsoft with is that being American they tend to get on a lot better with American companies, which include some that Sony probably doesn’t have any close relations with. It’s no surprise that EA and Microsoft has always worked so closely together and I wouldn’t be surprised if they’ve been talking to Netflix for a long time now.

The problem with all these big companies thinking they can muscle in on gaming is that they have nothing to offer in terms of content and, assuming xCloud works, not necessarily anything in terms of infrastructure either. More people have got Netflix than own a console, obviously, but it’s not like games on it are going to be free – they’ll be an extra service or pay to play and that’s still probably not going to be as good as xCloud x Game Pass.
Mambo

Easy sell
A Dark Souls style game by the team that made Nioh set in the same world as the very first Final Fantasy? I’ve got to say… that sounds like a really good idea for a game. Square Enix are masters of high concept games that I can’t imagine even hardcore fans wanting, let alone ordinary gamers, but I am totally on board with this just from hearing the rumour (I really hope it’s true!).

I’m not sure why so many publishers consider giving fans what they want to be such a bad idea. Like New Pokémon Snap recently. An instant hit and yet there’s no reason it couldn’t have been released anytime in the last 15 years. Or Battlefield never focusing on destruction effects even though that’s why everyone loved Bad Company.

If there’s some kind of business decision behind any of this it’s beyond me. But I’m going to guess it’s not that and it’s just people being stubborn, office politics, and just plain stupidity. Anyway, Final Fantasy Origins – sounds great, let’s hope the E3 reveal rumour is true.
Banksie

Built to last
RE: the angriest I’ve been with gaming. In the past I’ve often smashed controllers against the wall/table/floor, I even found myself stamping on one repeatedly once… that just hurt my foot! Sounds violent, no? But despite all that they survived, they were hardy back in the day. I think I had a SNES controller that you could prise open and peer inside, still worked like a charm though! And when you threw your N64 controller against the wall, that thing just left a dent!

The worst, and the one that made me feel regretful, was when I snapped my Nintendo DS SP in two. It was literally hanging by a ribbon and, as I say, I regretted it immediately. Nowadays I never take it out on the controllers, they are bad enough themselves. Two bust bumpers on one pad, sellotaped in place, and the joyful wandering movement on t’other pad’s second stick. So for 80% of the games I play the character is always wanting to look up. There’s nothing up there for you while Vikings and Saxons chop you to chow!
big boy bent
PS: This letter sounds like I hate Nintendo, I love Nintendo!

The spice of life
So The Outer Worlds 2 is another first person open world action role-playing game, eh? Microsoft really are going overboard on these. I mean, I do like the games, Skyrim is probably my favourite of all time, but there is such a thing as too much of a good thing.

It makes me wonder how much planning Microsoft is doing between its studios. Someone, presumably Phil Spencer, obviously said at one point that the Xbox needs more role-playing games, which it did, and this is the result. But did no-one think about what kind of role-players? There’s lots of different kind, with top-down views, over the should, Japanese role-players, strategy role-players… why not do one of each or at least one thing that wasn’t exactly the same as the others.

Nintendo can be like this too, with all the 2D platformers that come out. I remember the Wii U was saturated with them at one point, when it was obvious that would be the last thing to get anyone to buy one. And now we have Sony with all their third person sad dad simulators.

The thing I don’t get is that this isn’t really practice because it’s most different developers making them. I guess Microsoft, or whoever, get some practice in a producing role but beyond that I really don’t see what the benefit is of having so many similar games.
Nonzeta

Paid advertising
I can’t say I’m surprised by GC’s Biomutant review. I watched it being played on Conan O’Brien’s Clueless Gamer segment and it did look pretty awful.

I can only imagine the developers paid good money to have him play it, but I can’t imagine anyone that saw it would have been impressed enough to want to go out and by it.
drlowdon

Games Inbox: Will there be Bloodborne 2?

Maybe this time
Is it too much to hope for that the rumoured Sonic 30th anniversary collection does something as relatively straightforward as just compile all of the various iterations of the ’90s games in one place for what, I think, would be the first time? I’m less concerned about quality (no other Mega Drive titles for padding, please); just owning a comprehensive collection would be great.

The Mega Drive games (well, Sonic 1 and 2, at least) are a given but ideally, I’d like something similar to the Disney Classic Games: Aladdin and Lion King format with Game Gear and Master System variants on the Sonic titles. All of them. Not just the relatively random assortment we got in Sonic Gems Collection. Also, slightly off-brand but throw Knuckles’ Chaotix in there as well, as a curio that few people have actually ever had the chance to play.

Finally, I really hope Sega can once and for all sort out this alleged ongoing issue with Sonic 3 & Knuckles, because it’s daft. A lot of the videos detailing the similarities with Michael Jackson’s music show tenuous links, at best. I’m not denying they’re there, but it’s often a case of having to change the speed and pitch of the sample, while playing another track over the top to prove the point. The soundtrack has been replaced in previous ports, so you’d think there’d be a way to a permanent resolution by now. Sega can’t just keep on relying on Sonic 1 and 2 to prop up the series… can they?
Needlemouse91

Inbox also-rans
Jeez, I really wish I cared about anything as much as that Nintendo guy does. Sending some love his way.
Chris

It has been 25 years or more since I first played Doom and today, while playing it on the Xbox One, I realised that the logo I saw everywhere was saying UAC and not warning me about a vacuum à la Airplane 2.
Chris Hard

Regardless of the technical complexity of the graphics what game do you think has the most interesting and distinctive visuals? How important is a game’s art style to you and is it alone enough to get you interested in a game – or put you off one?

The question probably rules out anything that’s simply trying to be photorealistic, but you can nominate anything you like if you feel it has a strong enough visual style.


MORE : Weekend Hot Topic, part 1: The angriest you’ve been at a video game


MORE : Weekend Hot Topic, part 2: The angriest you’ve been at a video game