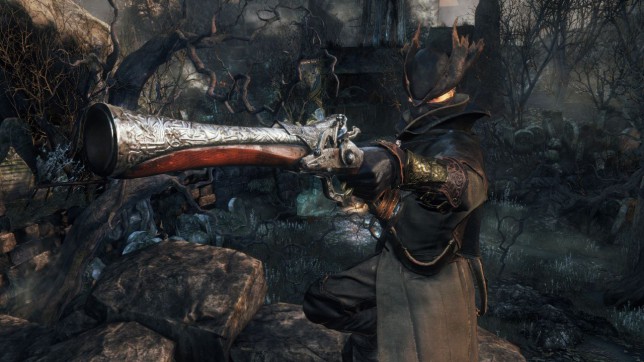 The Monday Inbox hears from a very angry Nintendo fan, as one reader recalls the horror of DRIV3R and the Chase Catalita mission.

Wondrous sequel
Not surprised to see Bloodborne and other FromSoftware games get mentioned a lot in the Hot Topic about getting frustrated about your games. Frustration is certainly part of the story when playing a Soulsborne but I wouldn’t have it any other way. They’re my absolutely favourite set of games and Bloodborne is the best of the best. I love it for the setting, the combat, and just the incredible mood of doom and hopelessness, that is mirrored by both the gameplay and the story.

As far as I’m concerned, it’s one of the best games ever made, if not the actual best, and yet we’ve never heard even a hint oof a sequel. I know it wasn’t a big seller, and Days Gone suggests that matters to Sony, but Days Gone did not get the critical response that Bloodborne did.

I’ve heard fans theorise that Sony is planning a sequel, since they’ve said they’ve got a bunch of unannounced games on the way, but that is the closest anything comes to any kind of official hint. I’d love to see it though, not just because of how I feel about the original game but if Elden Ring is open world and quite different to Dark Souls then Bloodborne 2 would be a useful way to continue a more traditional style of Soulsborne.
Wilson

Positively Evil
I completely agree with Sparky’s Resident Evil Village feature at the weekend. The game’s okay, better than stinkers like 5, 6, and 3’s remake, but it’s painfully unexciting and predictable. Like some sort of computer algorithm spat out the game design, while the only bit that was made by a human was Donna Beneviento’s house. It’s certainly not a survival horror in any real sense and, as the feature points, out it was never really supposed to be.

The description of what is essentially the ‘Capcom cycle’, where they try to turn it into an action game then have to do a soft reboot and turn it back again is, I think, sadly accurate. Since the next one is supposed to be the end of the trilogy that may stay in the Village action style but I look forward to Resident Evil being another ‘back to its roots’ game, before Capcom get ideas above their station again after that.

I sound negative but I do love the series, it’s just unfortunate that in order to match modern presentation standards requires such a huge budget that it’s clearly very difficult for Capcom to justify doing that for a horror game. I suppose the positive thing is to be glad they’ve managed it as much as they have. Resident Evil 2 did always seem like a minor miracle.
Gosford

Exceptional Naughty Dog
Another interest Reader’s Feature about The Last Of Us Part 2 at the weekend. I think the wildly varying opinions on the game (if you ignore the haters) is the difference between some people enjoying the story enough that they don’t care that you have no effect on it and others who assume, not unreasonably that you expect interactive entertainment to be… interactive.

I fall more in the latter camp but I was still able to enjoy the game simply because it’s so well made. I certainly wouldn’t want all games to be like that but I think simply because Naughty Dog are so good at what they do, and their games are so expensive to make, very few developers even try.

I’m happy for Naughty Dog to be the exception to the rule in terms of my story based games, although I would love to see them attempt to make something that allowed for at least some player agency.
Corron

Shooting and more
So, what I have learned from playing Resident Evil Village? Well, that it has one creepy section which is almost crying out for more DLC, depending on whether player’s nerves can take it or not. Also, that playing through the game three times or more results in you becoming almost like the terminator.

Everything about this game is designed around the replay value and that’s great. That said, only problem is very quickly the guns remove any sense of dread or tension, especially once upgraded and with infinite ammo. I mean, I ruined most bosses on very hard with my upgraded WCX and there are many more powerful weapons than that.

I guess finding that sweet spot between not being too hard or too easy is problematic. Of course, you can start again on hardcore but would you really want to, having unlocked so much? Also, the factory enemies were like Wolfenstein in a way. The game was great but personally I rate Metro Exodus as a first person shooter higher.
Icelticghost

GC: Both those games have first person shooting in them, but that’s not really how we’d define them.

Expensive reaction
Great responses to the Weekend Hot Topic. Couldn’t think of any particular instances for me personally (other than one bit in a jail in Half-Life 2, which was so frustrating I switched it off for over six months before I realised you could switch the hardness level down if you needed… which I did!).

But did think of my son and his friends. Lag induced rage on FIFA, which is understandable when you lose and it’s not your fault but it does lead to a lot of shouting and cries for everyone to turn the Wi-Fi off on their phones!

But some of them respond beyond shouting, worse cases I’ve been told of was broken controllers (with one wedging itself in the wall when it was thrown at it) and worst of all one of them punching the TV and breaking the screen. Expensive.
WoD

Putting in the hours
The most I ever got annoyed with a game was DRIV3R. It took me two years to finish that game, as it was pretty hard anyway, but there was a particular mission called Chase Catalita, which was a car chase which was just brutally difficult. I found out years later that she could take two routes for the chase, one of which was tonnes easier than the one I did.

It was a notoriously buggy game and it seems that my copy had a bug so she always took the same, more difficult route. It got to the point where I would play it for an hour each weekend every weekend for months, as playing it each evening would have put me off games forever. I don’t know why I put myself through it. Stubbornness maybe, but also because when you’re a kid you don’t have as many games to play. When I finally beat it I celebrated like England had won the World Cup.
Angry_Kurt (Twitter)
Now playing: Pokémon Sun (3DS) and Parkitect (PC)

Apathetic attack
Days Gone is such a weird game to get such an angry community of defenders. It’s so completely ordinary that I don’t know anyone has ever summoned the energy to actively dislike it. Even GC’s review, which is one of the more negative ones, does claim anything in it is especially bad, just boring and derivative.

I have to say that was certainly my experience of the game. I borrowed the disc off a friend and lost interest three or four hours in. There are so many more interesting games than that to waste my time with.
Cranston

Games Inbox: Will there be Bloodborne 2?

Weekend Hot Topic, part 2: The angriest you’ve been at a video game

You say that the PlayStation 4 was the first time Sony started to have its exclusives be a draw. I say don’t ever use Sony and Nintendo exclusives in the same sentence because they will never be equal. Oh, here’s another thing about your precious Sony: six, count ‘em, Switch games have outsold or sold as much as the PlayStation 4’s highest selling game and the Switch is on its way to being the top selling console of all time. Chew on that.

And this from someone who has owned PS1 through PlayStation 4 and has been a supporter on Sony since the PS1 era. But I still say they don’t hold a candle to Nintendo when it comes to exclusives. Talk to me when they have anything comparable to Zelda, Mario, Smash, Animal Crossing or Pokémon. Maybe when there’s 25 Uncharted games I might agree with you but until that day comes they’re not comparable.

So, to reiterate what I just said, Nintendo and Sony may be in competition at a monetary level but they’re not even close in terms of accomplishments. And not even close in terms of franchises. Not even a tiny bit. You can’t even begin to theoretically compare any of Sony’s small franchises to sheer legacies like Zelda or Metroid. What Sony franchise has 10 entries or 15 or 20? Name me one single Sony franchise that can even come close to touching something like Mario or Zelda? Oh yeah, there is none. Even God of War is like a commercial compared to Zelda, which is an entire TV series, commercials, and special features.

That is all.
Anon

GC: Are you okay? It sounds like you need a lie down.

Inbox also-rans
Will the game Days Gone be moddable now that it’s on PC or is there the dreaded DRM to prevent it?
Bobwallett

GC: The only thing preventing DLC is whether anyone cares enough to make it. So, in the case of Days Gone… maybe?

I might be out of the loop, because I’m still running a PlayStation 3 and Xbox 360, but there was still an update to PlayStation 3 not too long ago. Maybe more recent consoles do have them, but I’ve always wondered, why are there never patch notes for the updates?
Sven

GC: Are they not on the PlayStation website? They are for more recent consoles.

Regardless of the technical complexity of the graphics what game do you think has the most interesting and distinctive visuals? How important is a game’s art style to you and is it alone enough to get you interested in a game – or put you off one?

The question probably rules out anything that’s simply trying to be photorealistic, but you can nominate anything you like if you feel it has a strong enough visual style.


MORE : Weekend Hot Topic, part 1: The angriest you’ve been at a video game


MORE : Weekend Hot Topic, part 2: The angriest you’ve been at a video game