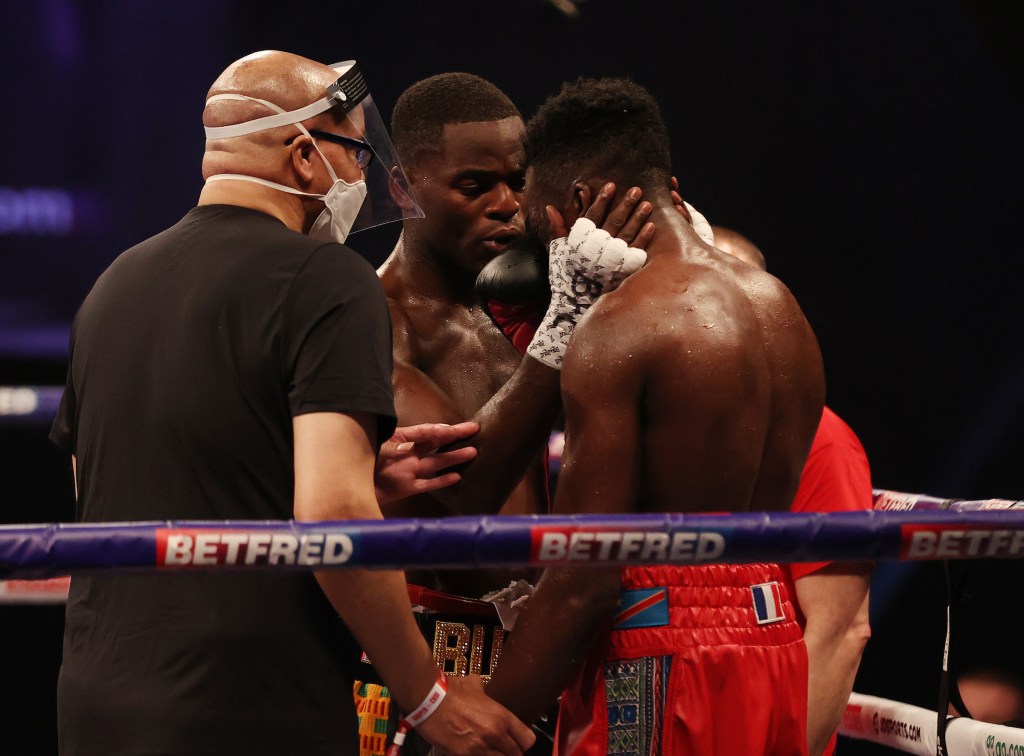 Joshua Buatsi consoled Daniel Blenda Dos Santos after his opponent was reduced to tears in the aftermath of his savage knockout defeat to the Londoner.

Buatsi defended his WBA international light heavyweight title with a devastating right hand finish in the fourth round in Manchester on Saturday night.

Dos Santos was out cold before he crumbled to the mat and needed immediate medical attention after the vicious stoppage.

The Frenchman was able to get back to his feet but broke down in tears following the first defeat of his professional career.

Buatsi extended his professional record to 14-0 with the win that moved him another step closer to a world title shot but did not show the slightest hint of celebration while his opponent was being attended to.

The Croydon fighter, who had already checked on his fallen opponent while he was receiving medical attention, returned to centre ring to embrace his opponent before the fight decision was officially announced.

Buasti, who won bronze for Great Britain at Rio 2016, was fighting for the first time with new trainer Virgil Hunter.

Promoter Eddie Hearn hopes to have his man back out in June or July and while he believes he will beat current WBO champion Dmitry Bivol, suggested he will have at least one more fight before challenging for world honours – potentially against domestic rival Craig Richards.

‘I believe Buatsi can beat Dmitry Bivol. But first we need to find the middle-ground between Dos Santos and Bivol,’ Hearn told Sky Sports.

‘Sullivan Barrera? I know he’s fighting Gilberto Ramirez. But he’s the kind of guy who will tell you where Buatsi is at.

‘Between a year and two years, those fights will tell you how ready he is.

‘Craig Richards is a fight. People like domestic fights. He put in a great fight with Bivol and, if he believed more in himself, could have won. He might be kicking himself.

‘Buatsi vs Richards? It’s one that could certainly get done.

‘He needs momentum. Three fights this year, July next.’


MORE : Lerrone Richards confident he will walk away a world title contender with victory over Giovanni de Carolis