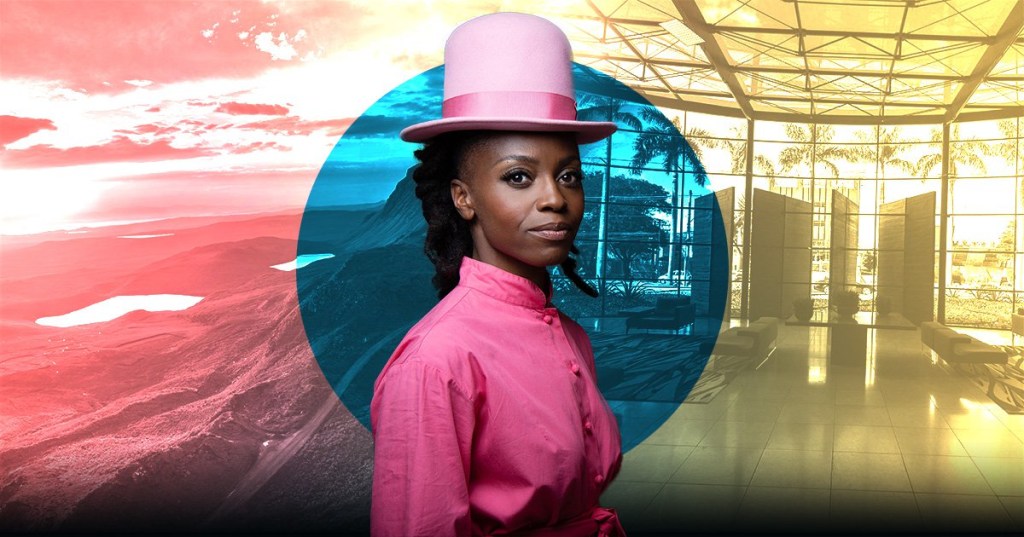 In the latest edition of On The Road With, we chat with Skye Edwards.

The lead vocalist of Morcheeba talks about feeding elephants oranges on safari in South Africa, getting caught up in an all-out riot in Chile and mixing with the stars in Edinburgh.

On safari in South Africa in 2018 at the Inverdoorn Game Reserve, a 10,000-hectare reserve in the Karoo, two and a half hours’ drive from Cape Town.

It blew my mind seeing lions, rhinos, zebras and giraffes in the wild. Towards the end, we stopped for a snack and to my absolute amazement, two gigantic elephants came walking towards us with their handlers. Both had been rescued from a horrendous life.

It was incredibly humbling to feed one of the elephants oranges – this huge beast was so gentle with its trunk and when he looked at me, it felt like he looked right into my soul.

And your favourite city?

Shanghai. In 2003, Morcheeba were invited to tour China by the British Council as part of its Think UK campaign to promote the UK’s creative industries over there.

We played two free shows in Chongqing for 16,000 students, then did shows in Beijing, Guangzhou and Shenzhen.

Throughout the whole tour, the food was remarkable, very different to your local Chinese takeaway. If you ordered fish, they’d bring it out alive and wriggling to show you it was fresh and healthy before cooking it.

At the time we visited Shanghai, two-thirds of the world’s construction cranes were there. The atrium of the Grand Hyatt is a must-visit, as is the Cloud Nine bar on the 87th floor (rooms from £125.50, hyatt.com).

When have you been most frightened while travelling?

In Santiago, Chile, October 2019. That morning, my husband and I had strolled up San Cristóbal Hill. On our way back to the hotel we walked through the Estallido Social, a noisy but good-natured civil demonstration in response to increased costs of living and general inequality.

Later, the protest turned into rioting, with soldiers firing rubber bullets and tear gas. As I got dressed to play a show that night, there were helicopters and smoke in the air.

There were too many fans at the venue to cancel the gig and the van booked to take us didn’t make it. The only way to get there was on foot, past burning buses blocking the roads. Our rep was panicked, which made me even more anxious. My heart was racing, my eyes and throat were sore from the tear gas

Have you ever pinched anything from a hotel room?

Aesop Aromatique hand wash. In 2010 we had a gig in São Paulo, Brazil, and were invited to stay at the beautiful Hotel Unique by the owner of the hotel, who is a huge Morcheeba fan and named his roof top bar Skye Bar after me (rooms from £144, hotelunique.com). When we checked out, I packed the hand soap and whenever I smell it, it takes me back.

A hotel car park in Edinburgh. My husband and I had a VW T4 camper van at that time and decided to drive up to Edinburgh for the 2003 MTV music awards.

We had a fantastic night mingling with Pink, Garbage, Justin Timberlake and Beyoncé. At the aftershow party we got chatting to actor Gerard Butler, who asked where we were staying.

We said the Caledonian Hotel but in reality it was the hotel car park. I absolutely loved our camper van – it was cosy with a potty and stove, we had everything we needed.

And where’s the best place you have spent the night?

When lockdown lifted last summer we hired a motorhome and drove to the Outer Hebrides. We visited Skye, and the isles of Harris and Lewis, where we saw the Callanish Standing Stones, which are older than Stonehenge.

We made our way to Luskentyre beach, one of the largest and most spectacular beaches on Harris, with miles of white sand and clear greeny-blue water, and
that evening spent the night parked by the roadside of Horgabost beach, where we woke to the jaw-dropping sound of the ocean crashing on to the rocks.

Do you need a Covid vaccine to go on holiday abroad?

Where are you going to go next?

The next big trip will be for my 50th birthday in 2022. We plan to go to Tulum, Mexico. I’ve never been before. A friend has a place she rents out called Cosmo Tulum with three guest casitas.

Nestled in the jungle, it’s a private villa just footsteps from the beach (from £977pn, airbnb.com). There are six bedrooms so we can have the whole family with us. Situated in a large, walled tropical garden with spectacular jungle views, it sounds like a piece of heaven.

Morcheeba’s album, Blackest Blue, is out on May 14 via Fly Agaric Records, in partnership with Kartel Music Group. Pre-order at morcheeba.lnk.to/ohohyeah.

MORE : How far can I travel in the UK right now?

MORE : The Maldives plans to offer Covid vaccines to tourists as a travel incentive