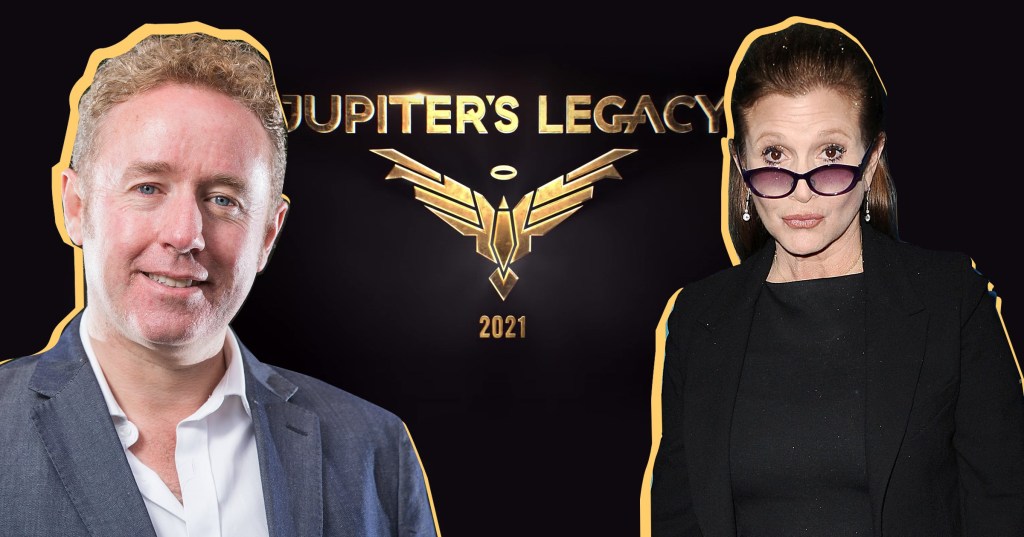 The creator of the Jupiter’s Legacy comic book series, which is now a Netflix series, has recalled the meeting he had with Star Wars icon Carrie Fisher when he told her how she provided inspiration for the story – and it went pretty much as you’d expect.

Jupiter’s Legacy, starring Josh Duhamel, Leslie Bibb and Matt Lanter, tells the story of a group of superheroes who obtained their powers in the 1930s and are now living in the present day, surrounded by superpowered youngsters attempting to follow in their footsteps.

The gritty tale is based on the comics by Scottish comic book writer Mark Millar, who – in addition to working for Marvel comics and DC comics – launched Millarworld in 2004, launching stories including Wanted, Kick-Ass and Kingsman: The Secret Service.

During a recent conversation with Metro.co.uk and other press, Mark explained that Carrie’s 2008 autobiographical book Wishful Drinking helped to shape the character of Chloe Sampson, who in Jupiter’s Legacy is the daughter of two of Earth’s mightiest heroes, The Utopian and Lady Liberty.

In the Netflix series, Chloe Sampson, who is played by Elena Kampouris, is perceived as the rebellious member of the Sampson clan, while her brother, Brandon Sampson (Andrew Horton), faces the struggle of living up to his family name.

‘Carrie Fisher rooted it for me, because I came up with this idea in 2008 and started writing it in 2011. The financial crash was my big inspiration. But I didn’t quite have the hook on the main character Chloe,’ Mark explained.

‘And then I read Carrie Fisher’s Wishful Drinking book, which made me realise how fascinating that was – that you can be awesome like Princess Leia, but because your mum and dad are more famous, you never feel you live up to their potential. Suddenly the character clicked into place with me.’

Carrie, who died in 2016 at the age of 60, was the daughter of singer Eddie Fisher and Academy Award-nominated actor Debbie Reynolds.

In the late actor’s 2011 book Shockaholic, she wrote of her parents: ‘My parents, Eddie Fisher and Debbie Reynolds, weren’t really people in the traditional sense. I think this was partly because they were stars before their characters had a chance to form.’

Mark recollected meeting Carrie in 2015 while at a premiere for Star Wars: The Force Awakens, the first film in the sequel trilogy.

‘I met Carrie Fisher actually a little while before she died, I met her in 2015 at the Star Wars premiere. I’m friendly with Mark Hamill and he introduced her to me,’ he said.

‘The two of us sat and we got on really well, we were sitting having a drink all night. Eventually I said to her, “This is going to sound crazy, but I’m doing this superhero thing and your book really inspired me, massively for it.”

‘I told her all about it, and she was like, “Young man, that’s very interesting, but just go and get me another drink.” So that was the end of the conversation!’ he concluded, laughing.

Netflix’s The Sons of Sam documentary: What happened to Maury Terry?

In Jupiter’s Legacy, audiences will be transported to the past to see how the original members of superhero team The Union gained their powers almost a century ago, while also seeing how their legacy has lived on as their moral code is questioned in modern times.

At its heart, the series explores the complicated relationships between friends and family and the significant impact they can have through different generations.

Jupiter’s Legacy launches on Netflix on Friday May 7.


MORE : Jupiter’s Legacy star Josh Duhamel felt he was ‘too old’ to play a superhero: ‘That ship has sailed’