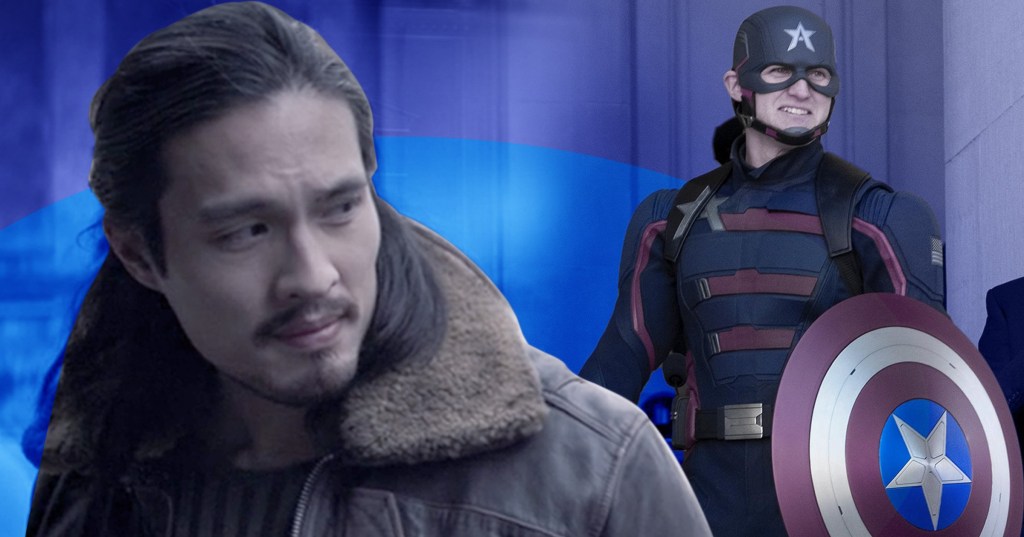 Warning: spoilers ahead for The Falcon and The Winter Soldier.

The finale of The Falcon and The Winter Soldier on Disney Plus marks a significant turning point in the Marvel Cinematic Universe, where the future of the Avengers is yet to be determined and the legacy of Captain America is fraught with uncertainty.

With the disgraced John Walker (Wyatt Russell) now flying solo and anti-patriotism group the Flag-Smashers continuing to spread their ethos far and wide, how will Bucky Barnes (Sebastian Stan) and Sam Wilson (Anthony Mackie) fare when faced with their toughest challenge yet?

Metro.co.uk recently spoke to Desmond Chiam, who plays Flag-Smashers member Dovich in the Marvel series, about what viewers can expect from episode six.

While the Australian actor kept his cards close to his chest, he promised that fans are in for a wild ride, saying: ‘Trust me, Marvel has a crazy finale locked in for this. It’s going to be epic.’

Of course, we wouldn’t have expected an MCU actor to spill the beans on the studio’s secrets. But he did provide a fascinating clue as to the thematic direction of the final episode.

‘Something that’s a theme that’s tackled throughout the show – and no spoilers but particularly in this last episode as well – is what the legacy of the shield can mean and in some ways what it’s always meant,’ he told us.

Episode four of Falcon and The Winter Soldier saw the legacy of Captain America’s symbolic shield land in murky waters, when a now-superpowered John used it to brutally Nico (Noah Mills), a member of the Flag-Smashers, in broad daylight.

As a fan of Captain America since childhood, Desmond found that scene ‘horrific’ to watch, particularly in the final shot when John stands up and there’s blood dripping from the bottom of the shield.

Desmond noted that the soldier was standing ‘in that almost iconic pose that Cap stands in, but it’s just off a little’, which ‘was unsettling to see’.

But behind-the-scenes, the making of that moment was far more light-hearted than fans might have imagined, according to conversations Desmond shared with his co-star Noah.

‘He’s going: “It’s really cool the way they set it up in the square…” so from that side he was really excited about it. I was kind of like, “Aw yeah, good for you man!” He’s a good dude – someone else might have taken it personally, but you know, he doesn’t.’

A few weeks ago, Desmond shared a viral thread on Twitter about his close connection to Captain America, recollecting the emotional day he was handed a small piece of the superhero’s shield to keep.

While a second season of Falcon and The Winter Soldier hasn’t yet been confirmed – despite heavy rumours – as a fan, Desmond says he would ‘love’ to see it happen.

‘I will watch this corner of the universe till my dying day,’ he said.

Loki TV series: When is the release date for the Marvel show and who is in the cast?

‘Since Captain America: The Winter Soldier, I’ve just loved this particular corner of the universe. It’s a little more real, a little more lived out. I love the cosmic stuff too, but that has never been my favourite part of the comics either, even though it is a really big part of it.

‘But I do like the more grounded stuff. So hell yeah, if they’re going to do it I’m going to watch it.’

The Falcon and The Winter Soldier is available to watch on Disney Plus.


MORE : Falcon and Winter Soldier episode 5: Does Bucky have another sentimental Captain America memento and where is Steve Rogers?


MORE : Falcon and Winter Soldier episode 5: Who is Contessa Valentina Allegra de Fontaine and is she Madame Hydra?