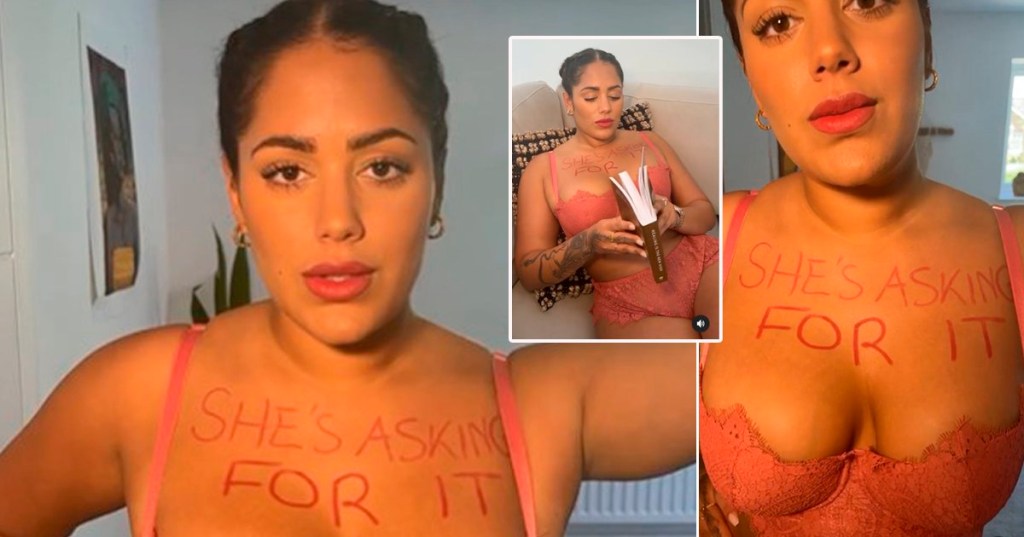 Malin Andersson has hit out at men who direct crude comments towards her over what she wears.

The Love Island star, 23, is frequently enraged by male onlookers who gawp at her for how she looks, backing the message behind film Promising Young Women.

The movie, which is now on Sky Cinema, follows Cassandra Thomas (Carey Mulligan) as she targets would-be rapists in bars.

In the flick, Cassandra is seen leaving with men who offer her a lift home while she is seemingly intoxicated, asking if she’d like to stop at their place for one last drink.

She tricks them by appearing drunk and vulnerable, and after one thing leads to another she snaps back to sobriety as they pull the underwear off her apparently unconscious body, leaving them to recoil in horror.

Malin has now shared an Instagram video of herself in her underwear with the words ‘she’s asking for it’ scrawled across her chest in lipstick.

Along with the video, Malin wrote: ‘IF I HEAR THAT ONE MORE TIME… “SHES ASKING FOR IT.” I watched Sky Cinema’s new film Promising Young Woman and it inspired me to shed light on some of the very prominent themes of this incredible movie.

‘I get bombarded with comments like this from men, just because of what I choose to wear. I feel very strongly and passionately about allowing women to wear what they want, and present themselves how they want, without being told that they are asking for it.

‘Promising Young Women helps enforce this message of standing up against sexist and inappropriate comments and I can’t wait for you guys to watch it. It’s out now on Sky Cinema.’

Last year Malin, shared horrific photos of the abuse she suffered after her ex-boyfriend was jailed for domestic violence.

She told her story online after speaking out against Tom Kemp, revealing months of physical and emotional abuse.

Sharing a picture of her neck and chin covered in bruises, she wrote: ‘Justice has been served. The last 2 years including my pregnancy have been absolute hell.

‘No one knows half of what I’ve gone through and I haven’t been able to say much due to an ongoing police investigation.

‘The father of my late daughter Consy has been jailed for only part of what he has done to me.’

Tom was given a 10-month sentence at Aylesbury Crown Court in September after admitting assault occasioning actual bodily harm.

Love Island 2021: Start date, contestants, length and everything else we know

Influencer Malin began dating Tom in 2018, with the pair having a daughter together, Consy, who tragically died shortly after she was born prematurely in January 2019.

While previously never referring to him by name online, Malin revealed her troubles in 2019 with a series of photos detailing a string of horrific bruises and injuries, including a bloody nose and a bite mark on her cheek.

If you are in immediate danger call 999. If you cannot talk, dial 55 and the operator will respond.

For emotional support, you can contact the National Domestic Violence Helpline on 0808 2000 247. Alternatively, you can email Women’s Aid on helpline@womensaid.org.uk

For free and confidential advice and support for women in London affected by abuse, you can call Solace on 0808 802 5565 or email advice@solacewomensaid.org

MORE : James Argent begins weight loss journey with gastric surgery: ‘Today is the first day of the rest of my life’