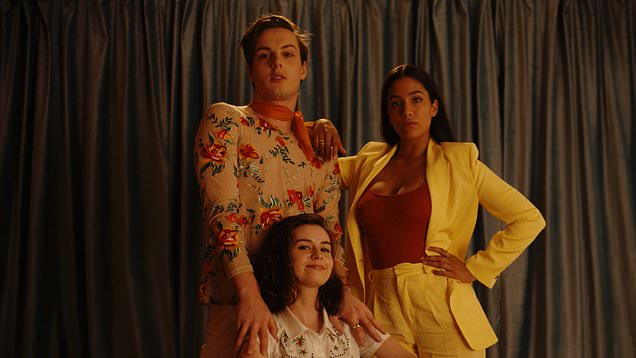 Warning: This story contains spoilers for Why Are You Like This.

Why Are You Like This is the six-part Australian comedy series streaming on Netflix starring Naomi Higgins, Olivia Junkeer and Wil King.

The show first premiered on ABC in 2018, but is brand new to the streaming giant as of today and follows three friends – Penny (played by Naomi), Mia (Olivia) and Austin (Wil) – through the divisive socio-political hellscape of 2021, leaving a path of destruction in their wake.

Metro.co.uk caught up with the three cast members ahead of its release and found out everything; from what inspired the show, to how the trailblazing mooncup scene in episode two came about, and what the plans are for a second season.

‘I grew up on sitcom TV, it’s like my favourite thing in the world and I used to do stand-up comedy and then this initiative came along with ABC and it was essentially a competition,’ Naomi, who is also one of the co-creators, began.

‘We did web series and a pilot and eventually, we won the series.’

Speaking about what other comedies stimulated the basis for Why Are You Like This, she explained: ‘My favourite kind of shows are the ones where the main characters are not good people, so like It’s Always Sunny In Philadelphia.

‘You love watching those characters but I don’t think you’d ever actually want to be friends with them. I’m always drawn to people like that because they’re complex and interesting.’

Describing her character, Naomi continued: ‘She’s me a few years ago when I was a little bit angrier and a little bit more anxious and cares so much about other people and the world and trying to make it better. How much can any one person do? But god, she tries her darndest. She has a lot of love to give but she’s constantly stressed.’

Wil’s Austin is, in his own words, ‘energetic, a lot and a little bit manic’.

‘I feel like I’ve changed a lot since I started playing Austin and I feel like there’s more Austin in me than there was at the start of the process and I’m proud of that,’ he told us. ‘I really relate to Austin. He was one of those characters where the second I read it, I got it. A lot of parts of me came out in playing him as well.’

‘I think Mia for me is like the voice in my head,’ Olivia added, as she weighed in on her character. ‘The difference between me and Mia is that Mia will say it and I will keep it in my head. I relate to her a lot. I would describe her as she does what she says, she means what she says and she’s confident and loud and spoilt.’

The second episode of Why Are You Like This revolves around Mia losing her mooncup up her vagina and roping in Austin to help her find it.

‘We didn’t want to show period blood just to be shocking, the same way you would with showing any other detail,’ Naomi said of the storyline.’I guess we were just writing from our experiences and we thought it was so funny.

‘In the past, people [TV execs] might have been like, “We can’t show that on TV!” but we didn’t ever have that thought. We just thought f*ck it, we’re just going to do it and it was fine.’

Commenting on how little periods are seen on TV, Naomi laughed: ‘I guess we’re activists.’

Recalling shooting the scenes, Olivia told us: ‘That was one of our first days on set. I was strangely completely comfortable. I just thought it was really fun and really funny. It was me and Wil in his house for two days.’

Naomi, on the other hand, was close to tears as she watched the montage scene play out in real-time.

‘Liv is such a good actor and I knew we wanted it to be funny but it made me really upset about this cup being stuck in her,’ she said. ‘I was so moved that I nearly cried. She was lying on the floor crying and I was like, “This is supposed to be a punch line!”‘

The trio is super keen to have Harry Styles join the cast to be part of a love triangle storyline between Mia and Austin, should the show be recommissioned for a second season.

‘We’d love to do a season two,’ Naomi enthused. ‘We’ve been thinking about new ways to put these characters through hell, it’s just so easy because they’re just so headstrong you just think of ways to punish them.’

‘I would like to meet everyone’s families,’ Olivia said, as she pitched what she’d like to unfold in the next chapter. ‘I’d like to see where they come from. I think everyone would be a bit different in a family setting.’

‘I wouldn’t say we’ve got a trajectory for multiple seasons but I think that one of the best things about writing characters that are based on you is that as you grow you can write things that happen to you,’ Naomi pointed out.

‘It makes it really easy to create new storylines, especially when you remain an idiot as I’ve done.’