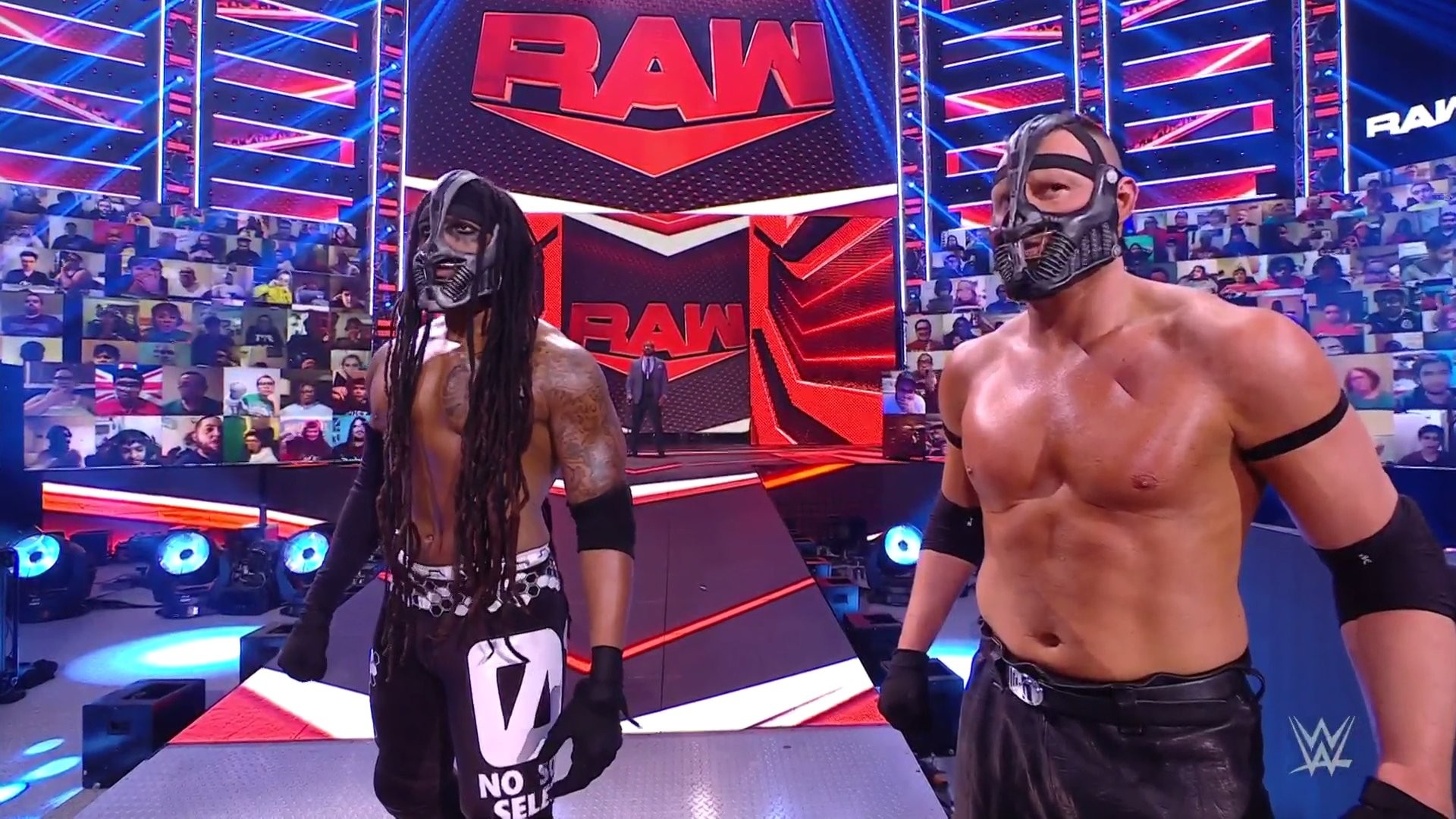 WWE ended the Raw after WrestleMania on a huge bombshell as former RETRIBUTION members T-Bar and Mace seemed to join the Hurt Business.

With the biggest show of the year – and the return of a live crowd – in the books, the company delivered some big surprises in the new-look ThunderDome, including the conclusion to a massive main event.

WWE Champion Bobby Lashley started the night taking on Riddle after a confrontation as he arrived at the arena.

He attacked the former United States champ during his entrance and battered him at ringside, with Riddle insisting he still wanted to take the match.

It was a silly decision really, as the All Mighty steamrolled him during an entertaining but one-sided bout and looked like an absolute beast as he won with the Hurt Lock.

Later in the night, MVP delivered a fantastic promo hyping up Lashley, and he was eventually interrupted by Drew McIntyre who insisted he will get his rematch one day and reclaim the WWE Title.

Braun Strowman was out next, agreeing with MVP that Drew should be at the back of the line whereas he deserves a shot for destroying Shane McMahon over the weekend.

However, Randy Orton came out and insisted he should be next in line after ridding himself of the Fiend/Alexa Bliss problem – which led to Adam Pearce making a Triple Threat match tonight with the winner going onto WrestleMania Backlash.

The match itself was a hard hitting and energetic affair with all three men looking strong – although some may have been disappointed that Samoa Joe wasn’t added after being removed from the Raw commentary team.

Regardless, the action was on point and the ending was brilliantly executed as Orton hit an RKO on Braun and covered him, only to get caught with a Claymore as McIntyre won to set up his rematch.

That wasn’t all though, as MVP appeared on the ramp staring the former world champion down, and Drew turned anticipating an attack – but no one could have predicted T-Bar and Mace being the ones to provide it.

The men behind the masks – Dominik Dijakovic and Dio Madden respectively – are very talented, so fans can be cautiously optimistic about where things go from here.

In the first surprise of the night, the Viking Raiders returned as Erik and Ivar won a fun match against Cedric Alexander and Shelton Benjamin.

As great as they looked, it’s a bit upsetting seeing the former Raw Tag Team Champions used as fodder here after they were such a prominent part of the show in the Hurt Business.

Charlotte Flair also made her return tonight, calling herself ‘the opportunity’ and discussing her importance to the women’s division.

She was absolutely on fire here as she put the roster on notice, while revealing just how disappointed she was to be left off WrestleMania 37.

The Queen would then inject herself into the Raw Women’s Title picture as she took out both Rhea Ripley and her challenger Asuka.

The two opponents were putting on a good show in a rematch from Sunday night’s WrestleMania show, but Flair spoiled made sure there was no winner as she positioned herself for a future title shot.

Backstage, Mandy Rose and Dana Brooke attacked Nia Jax after she and Shayna Baszler laughed about the former’s slip at Mania.

This led to a tag team match later on, with Jax slipping on the apron and Rose and Brooke taking a count out loss.

Meanwhile, a visit to Alexa’s Playground saw Bliss explaining her actions from last night, when she cost The Fiend his match against Randy Orton.

She said she realised she never really needed Bray Wyatt’s darkness to harness her own power, and she introduced everyone to her creepy doll friend Lily to bring a fantastic, haunting story time to an end.

After Maryse, The Miz and John Morrison hyped up tonight’s episode of Miz & Mrs – including some bickering between the two tag team partners – before recapping Saturday’s match with Bad Bunny.

Damian Priest came down to defend his pal’s honour, leading to a handicap match against his two Mania opponents.

The match itself was good, but the ending was ridiculous as Miz rolled up Priest for a win after the A-lister’s pants had come off during the fight.

Elsewhere, The New Day traded verbal jabs with Elias and Jaxson Ryker before their match, which was decent enough and had the right winners as Kofi Kingston and Xavier Woods bounced back after dropping the titles.

The Firefly Fun House returned this week, with Bray Wyatt back on form and alluding to Alexa Bliss’ betrayal as he said he’s happy to be back with his true friends.

He insisted this could be a new start for them all with a new Bray Wyatt, healing his puppet friends and promising that ‘he shall return’.