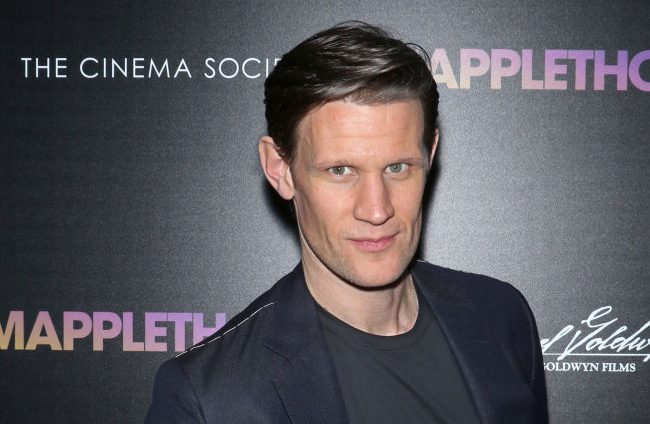 Matt Smith was salivating when handed the chance to play the ‘best worst version’ of himself in a new film role.

The former Doctor Who star, a self-declared ‘vampire-phile’, stars alongside Jared Leto in Marvel fang-fest Morbius.

Explaining his fixation with the blood suckers, the actor who played Prince Philip in The Crown said: ‘I love the whole myth that surrounds them; even if they’re ugly, they’re weird and sexy.

‘It’s the night-time brutality and trendiness rolled into one. The eternal life thing has always felt appealing, on some level, and the fact you get to be the best worst version of yourself.’

And he yearns for life to get going again as Covid rules lift. Smith, who split from long-term lover Lily James last year, told Port magazine: ‘I’m looking forward to having a party with everyone. It’s going to be like the 1920s — moonshine and nice sparkly dresses.’

He also pines for his Doctor Who years and revealed the keepsakes he kept from the show.

‘I’ve got the sonic screwdriver. They gave me a little box painted like the Tardis and my costumes,’ he said. Asked about his stint as the Time Lord, which ended in 2013, the 38-year-old added: ‘Of course you miss Doctor Who; it’s the best job in the world, but it’s challenging and taxing as well. That’s why people often get to three or four years before they throw the towel in.’

And he likes to keep in touch with his fellow Whovians.

‘I see David [Tennant] at conventions and stuff. You bump into people and have a sort of masonry handshake,’ he added.

Read the full interview in the ten-year anniversary issue of Port Magazine, out April 23.

Henry Cavill has revealed the identity of his mystery lover — by sharing the couple’s pawn pics with fans.

The Superman actor, 37, went Instagram official with Natalie Viscuso by posting a snap of them playing on a Game of Thrones chessboard at the weekend.

He captioned it: ‘This is me looking quietly confident shortly before my beautiful and brilliant love Natalie destroys me at chess.’ His new squeeze is the vice-president of television and digital studios at Legendary Entertainment, a production company involved in Henry’s 2020 flick Enola Holmes and 2013’s Man of Steel, according to her LinkedIn page. The 31-year-old was also featured on a 2005 episode of MTV show My Super Sweet 16.

The couple were seen holding hands on a walk with Henry’s pooch Kal last week.

Henry, who once dated The Big Bang Theory star Kaley Cuoco and stuntwoman Lucy Cork, previously admitted his past partners have been subjected to ‘a slew of hate’. And while he finds it ‘enormously flattering’ that people care about him and his love life, he will step back if the people in his life get ‘hurt’ by the negativity.

Speaking of the pros and cons of being in the spotlight in 2017, he said: ‘There is a flip-side to [fame]: as soon as I get into a relationship a slew of hate, directed at me as well as the girl, saying that I’ve changed.

‘I haven’t changed a bit. But you have to take all of that in your stride, there are positive and negative parts to all of it.’

Poldark hunk Aidan Turner has welcomed the introduction of sex coaches on set as he took on the role of a gay Leonardo da Vinci in Prime Video’s Leonardo.

It meant he had to pucker up for his first gay kiss on screen but he had no issue with it. The actor, 37, who recently wed Caitlin FitzGerald, told the Radio Times: ‘I hadn’t seen any depictions of him (da Vinci) as homosexual. I don’t think many shows have showed him in that light. It was much needed.’

He’s tipped to be the new 007 — but James Norton says stripping off to shoot sex scenes can cause ‘trauma’.

The 35-year-old, who set up his own production company in lockdown, said: ‘Everyone is sensitive about their naked body, so if you are going to have a sex scene, write “sex scene” and have actors say what they’re comfortable with.’

He also addressed the prospect of making James Bond more diverse. ‘Obviously, casting a Bond of colour is important, but there’s a bigger picture: we need to treat the cause rather than the symptom,’ he told GQ Hype.

Daniel Kaluuya s easily pleased… he celebrated his Bafta win by taking a soak in the bathtub.

The 32-year-old, who won the best supporting actor gong for his role in Judas And The Black Messiah, confessed: ‘I’m going to have a bath. I’m going to chill out.’

Responding to buzz he might win an Oscar — after securing Screen Actor’s Guild Critics’ Choice and Golden Globe awards earlier this year — he said: ‘I’m chill man. I’m not thinking about the Oscars right now.’

Life imitated art for Drivers License singer Olivia Rodrigo — when her car was slapped with a parking ticket.

Posting a picture of the Los Angeles parking violation on her Instagram account, the 18-year-old captioned it: ‘Damn this driving s*** isn’t all fun and games.’

The High School Musical: The Musical actress, whose tune topped the UK singles chart for nine weeks, recently passed her driving test at the fourth attempt.

Life’s a picnic for Richard and Froy

After being holed up together in lockdown, pals Richard Madden and Froy Gutierrez head out. The actors were later seen eating a picnic on London’s Hampstead Heath.

MORE : Too Close on ITV: Cast, time and how many episodes are there?