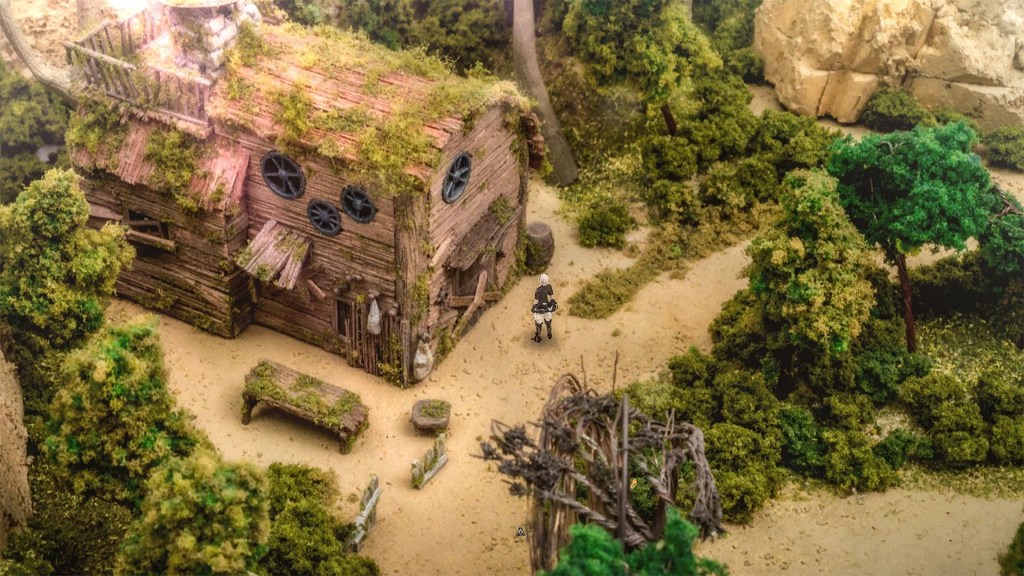 The creator of Final Fantasy helps celebrate the anniversary of Apple Arcade with a brand new game that’s perfect for JRPG nostalgists.

Apple Arcade, the iPhone maker’s game subscription service, has had an impressive first year, with timed exclusives like the excellent match-three battler Grindstone, indie classic Exit The Gungeon, and the comedy slapstick of Sneaky Sasquatch. Refusing to rest on its laurels, Apple is celebrating Arcade’s first anniversary with a slew of new killer material, the highest profile example of which is Fantasian.

Directed by Hironobu Sakaguchi, the creator of Final Fantasy, this is very similar to earlier outings in that series. From its androgynous, spiky-haired protagonist, who starts the game with no memory, to random monster encounters, to turn-based battles with sparkly magic and outsized swords, this is nostalgia-infused fan service so extreme it’s incredible that Kickstarter wasn’t involved.

Starting in the spartan and mostly empty Machine Realm, it’s not long before hero Leo is transported to the Human Realm, a more populace place created using real world miniature models photographed in tilt-shift, which gives the impression of exploring tiny, lovingly crafted dioramas. It occasionally makes characters look as though they’re not completely in contact with the ground but it’s generally a very nice effect.

Despite the unusual non-CGI surroundings, what you get up to within their confines is warmly familiar, namely talking to non-player characters, shamelessly pillaging people’s houses right in front of them, and accepting oblique side quests from friendly villagers. All that is regularly interrupted by random monster encounters, a feature that was divisive even at the height of its popularity decades ago.

Fantasian’s way around this is to hand you the Dimengeon, a gadget that stores up random encounters until you’re ready to take them on, or it reaches a maximum of 30 monsters, at which point you fight all of them together. That’s useful not just from the perspective of avoiding continual jarring interruptions, but also because many of your party’s battle moves work best against groups of enemies.

Along with the usual physical and magical attacks, there are moves that blast through multiple enemies at once, either in a straight line or along adjustable curves. You can also target icons that award extra turns, buff attack strength, or cure ailments. It makes the economies of scale available from the Dimengeon seem like a good deal and a positive way of addressing the controversy that understandably surrounds random encounters.

The other issue arising from that mechanic is the need to grind. Final Fantasy was utterly shameless about inserting boss encounters that effectively acted as gatekeepers, forcing you to level up enough to take them on, often via hours of annihilating increasingly dull cannon fodder. Fantasian is just as brazen, with several bosses requiring substantial amounts of walking backwards and forwards to repeatedly fill up the Dimengeon until your team is strong enough to get you through to the next section.

Given how ruthlessly linear the game is, you’ve got no option but to buckle down to some repetitive slaying. It’s a fun battle system, which makes those moments easier to bear, but there are some things even rose-tinted nostalgia can’t fix and having to spend upwards of an hour hacking your way through near-identikit groups of enemies eventually starts to feel like padding rather than entertainment.

Fantasian does a decent job in other areas however, one of which is that your party rarely stays the same for long. You have a maximum of three team members, and there are plenty of times where you’re alone or have a single partner, the story adding members or abducting them for later rescue.

It helps keep things fresh and encourages you to experiment with different combinations of powers and equipment. As well as armour and weaponry, Fantasian lets you equip a jewel that confers a stat increase, elemental resistance, or special ability. It’s a solid system with a simplicity that sits comfortably on a small screen.

While the game works with a controller, and on Apple TV for a more console-like experience, its fixed camera angles and lurching changes of view make it far more satisfying to play on a touchscreen. You’ll also find it works better in battles, giving you more refined control over the curve of your attacks and providing more accurate targeting than a joystick allows.

Navigation and battles aren’t the only things streamlined for mobile. Levelling up is initially automated, the game adding to your stats and dropping in new abilities as you progress. It’s only around 20 hours in that Leo’s skill tree becomes available, letting your customise abilities to a far greater degree and re-spec for free at any time, encouraging experimentation with its various subtleties.

By the time the closing credits roll, Leo, and potentially a teammate or two, will have hit the level 35 cap, which leaves you well short of the more interesting looking skills in the tree. The game makes it clear that this is only the end of part one though, your save file intended to be carried over when the next episode releases. There’s not much to do post-game if you’re already maxed out, although you can go back and tidy up side quests or grab any equipment you haven’t yet unlocked.

Fantasian review – Final Fantasy by any other name

In common with Final Fantasy, the sprawling plot, expansive cast, and frequent conversations often stray into whimsy. It’s not laugh out loud funny, but it’s generally light-hearted, with moments of gentle humour. Leo’s continual failure to remember to press the blue rather than red switch to avoid setting off the burglar alarm in his own secret basement, or our redoubtable heroes getting imprisoned for suspected undergarment theft at the royal palace, are in no way intended to be serious drama.

If you loved early Final Fantasies this will be like coming home. Despite modest innovations, the core of the gameplay, battles, and characterisation are just as they were in the classic Japanese role-playing game. Granted, random battles and hours of grinding won’t have been missed by many, but there’s a reason those games are so beloved and if you see this through to its 25-ish hour conclusion, episode two won’t come soon enough.

In Short: The unique art style belies a game that is, for the most part, ruthlessly old fashioned, but in a way that will please old school Final Fantasy fans and maybe even make some new ones.

Pros: A huge game for mobile, with fun turn-based battles and a couple of unique twists. Huge cast of characters and cleverly original art style.

Cons: Random battles and enforced grinding were always an acquired taste, as are the other tropes and traditions of JRPGs.


MORE : Fantasian could be last ever soundtrack from Final Fantasy composer Nobuo Uematsu