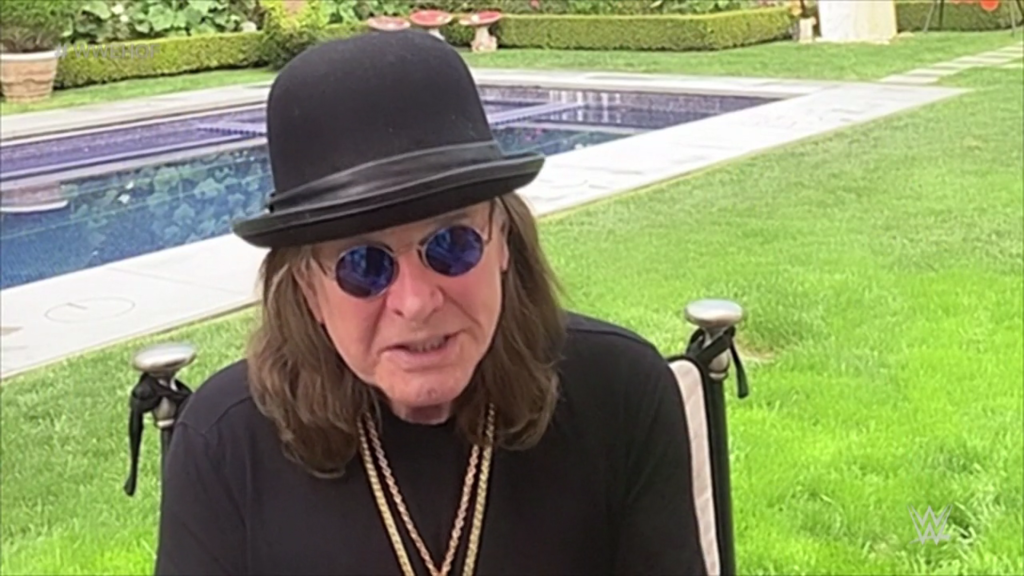 The Black Sabbath rocker – who has Parkinson’s – appeared via a video link during Tuesday night’s emotional ceremony as he sat in his garden and took his place in the company’s history in the celebrity wing as part of the 2021 class.

After being introduced by hosts Corey Graves and Kayla Braxton, he said: ‘Thank you so much WWE Universe for this Award. I don’t deserve it, but thank you anyway.

Ozzy first appeared at WrestleMania 2 back in 1986 in the corner of the British Bulldogs – Davey Boy Smith and Dynamite Kid – alongside Captain Lou Albano as they battled the Dream Team of Greg Valentine and Brutus Beefcake.

The Prince of Darkness also performed live on SmackDown back in 2007, and two years later he and wife Sharon Osbourne were guests hosts for an episode of Raw.

Elsewhere on the ceremony, Star Trek legend William Shatner was also inducted into the Hall of Fame’s celebrity wing as part of the 2020 class, who were honoured tonight after last year’s ceremony was cancelled due to the pandemic.

He said: ‘I was born in Montreal, and out of Montreal came many of the great wrestlers that became popular in the United States, so I follow a Montreal tradition if you will.

‘I never really wrestled but I got to know several people in WWE, threw Jerry Lawler out of the ring once, I claim that as a great honour. I have been a great fan of WWE for a long time.

‘So, I accept this induction into the Hall of Fame with the delight of someone who’s following some of his greatest heroes. Thank you so much.’

Nikki and Brie Bella were also inducted as part of the 2020 class, and Nikki even paid tribute to her ex-fiancé John Cena during their speech.

The twins – who are keen on making an in-ring return – thanked Dusty Rhodes, Pat Patterson, Mark Carron, their stepfather John Laurinaitis and their children, while Nikki said: ‘To John, thank you for teaching me a lot about this business and truly helping me find my Fearless side.’