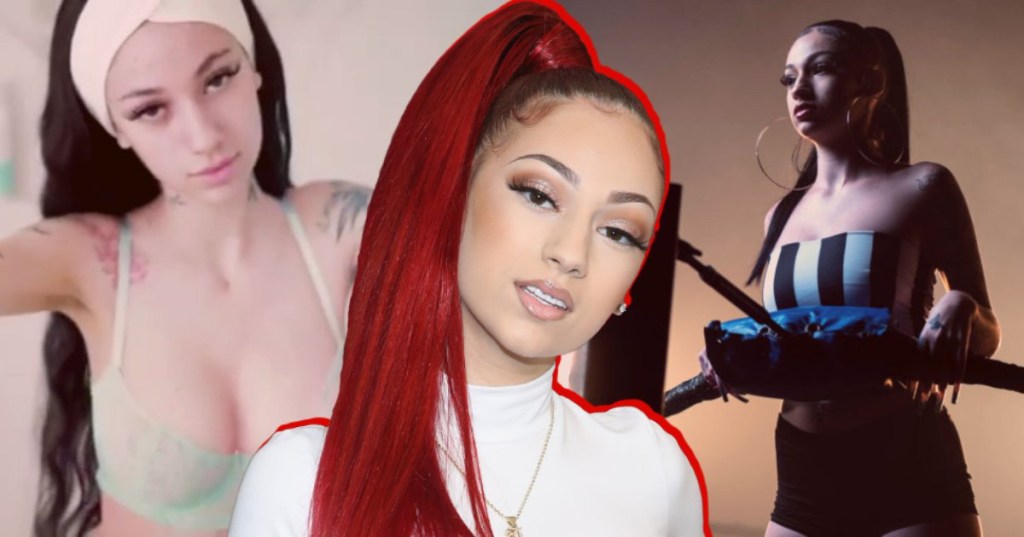 ‘Not bad for 6 hours, we broke the f*** out of that onlyfans record,’ she said of her achievement.

Danielle is just one of many stars to enjoy profitable success after signing up to OnlyFans.

The service, which is known for featuring explicit photos and videos, is also used by other celebs including Bella Thorne and Kerry Katona.

But who exactly is Danielle, and why is she famous? Here is everything you need to know.

Who is Danielle Bregoli?

Danielle Bregoli is a rapper, songwriter and internet personality.

Danielle was born and raised in Boynton Beach, Florida, with her parents separating when she was just an infant.

She is estranged from her father, who works as deputy for the Palm Beach County Sheriff’s Office in Florida.

Danielle launched her career as a rapper in 2017, adopting the stage name Bhad Bhabie.

She released her debut single These Heaux in 2017, which saw her calling out all the ‘b***hes’ and ‘h**s’ who have crossed her in her life.

After releasing a few more singles, Bhad Bhabie dropped her debut mixtape 15 in 2018, named after her age at the time.

Following the success of her mixtape, she later embarked on her first world tour, performing across the US as well as the UK and Australia.

Since then, Bhad Bhabie has continued to drop new tracks, with her most recent, Do It Like Me, being released last year.

Music aside, Danielle has also starred in her own Snapchat reality series, Bringing Up Bhabie, and even launched an endorsement deal with makeup brand CopyCat Beauty in 2019.

It seems OnlyFans is just her latest career move, and if her early revenue is anything to go by, it’s bound to be a success for her.

However, Danielle’s career has not stopped her from getting involved in legal issues, and in 2017, she was sentenced to five years probation after pleading guilty to a string of offences. However, her probation ended earlier than expected in 2018 when she hired a new lawyer.

Why is Danielle Bregoli famous and what does Cash Me Outside mean?

Danielle rose to prominence after she and her mother, Barbara Ann, appeared in a 2016 episode of Dr Phil in a segment titled ‘I Want To Give Up My Car-Stealing, Knife-Wielding, Twerking 13-Year-Old Daughter Who Tried To Frame Me For a Crime’.

During her appearance, Danielle discussed her behaviour alongside her mother, which included stealing a crew member’s car while the episode was in the process of filming.

As she became more and more annoyed at the audience’s reactions, Danielle then responded with her now-famous phrase: ‘Catch me outside, how about that?’, as she jokingly challenged them to a fight outside the studio.

Due to her strong accent, it sounded like she said, ‘Cash me ousside, how bow dah?’

Following her appearance on the show, the saying became a viral meme, with Danielle commonly being referred to as the Cash Me Outside girl.

Danielle Bregoli OnlyFans: who is she and why is she famous?

‘Cash me outside’ would later spawn a single of the same name, recorded by DJ Suede The Remix God. It also led to a series of dance videos on YouTube.

However, Danielle and her mother later sued three companies for ‘infringing her intellectual property rights’ for using her catchphrase without her consent.


MORE : Christopher Eccleston says Doctor Who needs to ‘explode the canon’ for BBC series to ‘survive’