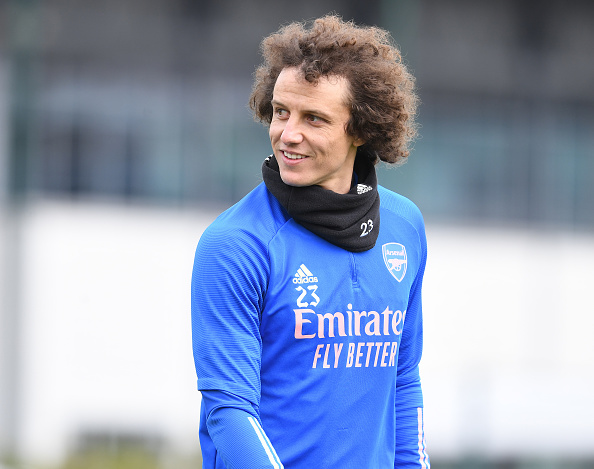 Arsenal head coach Mikel Arteta said David Luiz could need knee surgery in the wake of the side’s 3-0 defeat to Liverpool and was unable to confirm whether the defender would feature again this season.

Luiz played out the full 90 minutes of the Gunners’ 3-3 draw with West Ham before the international break but reported a feeling of discomfort in his right knee ahead of Saturday’s clash at the Emirates.

Rob Holding and Gabriel came in for Luiz and Pablo Mari at centre-back as the Premier League champions blew Arsenal away in a rampant second-half performance, with second-half substitute Diogo Jota netting either side of Mohamed Salah’s 68th-minute strike.

Kieran Tierney was also forced off on a miserable night for the north London club with injuries stacking up ahead of their Europa League quarter-final first leg with Slavia Prague on Thursday.

At his post-match press conference, Arteta revealed Tierney, Bukayo Saka, Emile Smith Rowe and Granit Xhaka were all doubts before delivering an update on Luiz’s situation.

Asked if the Brazilian requires surgery and pressed on whether he will be able to play again this term, the Spaniard replied: ‘We don’t know, there are a few possibilities on that being a little bit more conservative with the treatment.

‘We’re having to go through surgery, we’re talking with the doctors right now to make the right decision on that but it looks like he can be out for a few weeks at least.

Prodded again on whether Luiz could return before the end of the campaign, Arteta added: ‘I don’t know, it will depend again on the decision we take.

‘If it’s more conservative, it will be short-term. If it’s more radical for what he needs, obviously it will take longer.’

The Arsenal manager pulled no punches with his assessment of his players’ display and admitted he was ‘shocked’ by how they performed at home to Liverpool.

‘We completely deserved to lose the game they were better in every department,’ Arteta told Sky Sports.

‘They deserved to win with the margin they have or more and it was unacceptable from our side the way we played.’

‘I accept responsibility for the way we played today. They made the right decisions, we didn’t. It is my fault. I have to set the team up to perform in a different way and that is it.

‘Congratulations to Liverpool because they were exceptional today. That showed the difference between the two teams – that when they play at that level, the margin is incredibly high.

‘I don’t have to use any excuses – that we don’t have five or six players – the standards are much higher at this football club and I have to get them to perform at that level. It was technical as well.

‘We gave every ball away and could not put three passes together. The basics weren’t there today. If you do that against this kind of opponent, you get punished like we have.

‘At the moment I am in shock. I didn’t expect that because of the way the team trained. It is a challenge. A challenge brings an opportunity. If you have courage and you represent a club like this, you have to stand up and take it.’