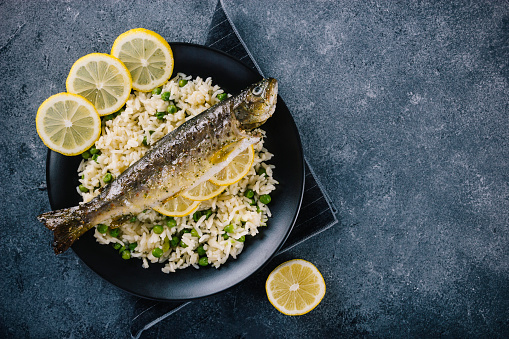 As the Easter weekend approaches, many are celebrating the occasion by cooking fish dishes.

The Christian festival begins on Good Friday, which marks the day of Jesus’ crucifixion in the Bible.

While eating Easter eggs on Sunday is perhaps the most famous gastronomic part of the Bank Holiday, it has a pretty fishy past, too.

So if you’re planning to eat fish today, find out why here.

Why do people eat fish on Good Friday?

Fish is traditionally eaten on Fridays by Catholics, following the doctrine set out by the Vatican.

The medieval church decreed that meat – specifically the meat of warm-blooded animals – shouldn’t be eaten on Fridays, which means some fast by eating fish instead.

Some have also pointed out that this decision had political implications, as it boosted the burgeoning European fish trade.

In the 1960s, the Pope modified the ruling somewhat, saying it could be interpreted depending on a person’s economic status – meaning eating fish on a Friday isn’t compulsory.

For other Christian denominations, eating fish on Good Friday marks the symbolism of the day in the Bible that Jesus was killed by the Romans.

Fish are also significant as they were used as a sign by early Christians to identify themselves.

Some of Jesus’ disciples were also fishermen, so the food is referenced regularly during accounts of his life.

When do Christians fast?

Fasting on certain days of the week is common among denominations other than Catholicism, too.

Eastern Orthodox and Lutheran Christians abstain from eating meat on Wednesdays, in remembrance of Judas’ betrayal of Jesus in the Easter story.

Some give up certain parts of their diet, or behaviours, for the period before Easter Sunday.