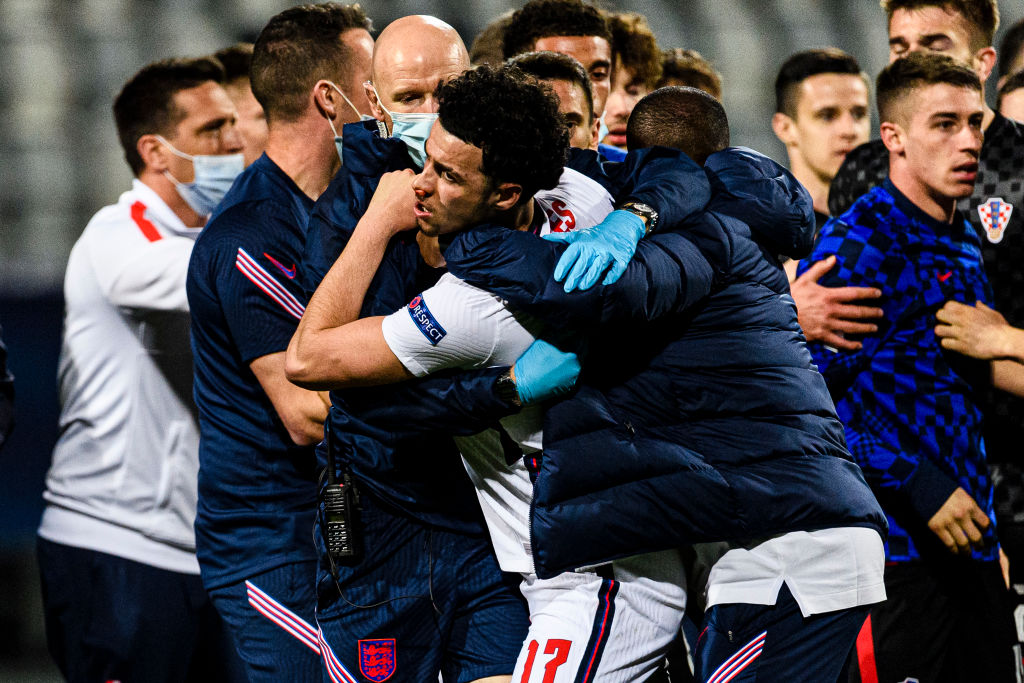 Curtis Jones went from hero to villain as the England Under-21s crashed out of the European Championships at the group stage at the hands of Croatia and Aidy Boothroyd said his sending off was partly down to the side’s ‘highly emotive’ elimination.

England’s 2-1 victory was not enough to secure them a quarter-final place as they had to beat Group D rivals Croatia by two clear goals after losing their two previous games to Portugal and Switzerland.

The Young Lions had looked on course to progress against the odds as Eberechi Eze’s early penalty and Jones’ excellent second-half strike gave them a two-goal advantage with 15 minutes remaining at Slovenia’s Bonifika Stadium.

But Domagoj Bradaric beat Aaron Ramsdale with a stunning finish at the death to put Boothroyd’s men out of their misery after an immensely disappointing group-stage effort.

A bloodied Jones exploded at the final whistle as he was caught in the middle of Croatia’s wild celebrations, who went through as Group D runners-up behind Portugal.

Referee Harm Osmers showed the Liverpool midfielder a second yellow card for his part in the altercation and a crestfallen Boothroyd admitted ’emotions got a little bit high’ while discussing the incident at his post-match press conference.

‘I think what happened was there was a team jumping around, all their staff were on the pitch and celebrating in between one or two of our boys and I think it’s just got a bit fraught and emotions got a little bit high,’ he told reporters.

‘I’ve got to get to the bottom of the card. I’ve been unable to speak to the referee yet but I’ll find out what went on there.

‘I think it’s just one of those highly emotive situations where sometimes difficult things can happen and thankfully both sets of staff sorted it out.’

Boothroyd came under increasing scrutiny over the course of England’s tournament and a shortlist of potential managerial targets is already being drawn up, with the 50-year-old out of contract this summer.

However, the ex-Watford boss believes he’s still the right man for the job and will ‘keep going’ until told otherwise.

Pressed on whether he’s the right person to take the England U21s forward, Boothroyd replied: ‘I think so. The amount of players that have come through would suggest there’s a pathway working.

‘Our youngest players that come in the building know they’ve got a chance to play in the first team because of the way we’re structured.

‘Of course it’s important and we want to win but to produce players and win tournaments at the same time is very difficult.

‘I love being involved with these players, I really enjoy it which makes it even more difficult to come out and speak to you in the media and answer that question.

‘I’m going to keep going and then we’ll see what happens.’