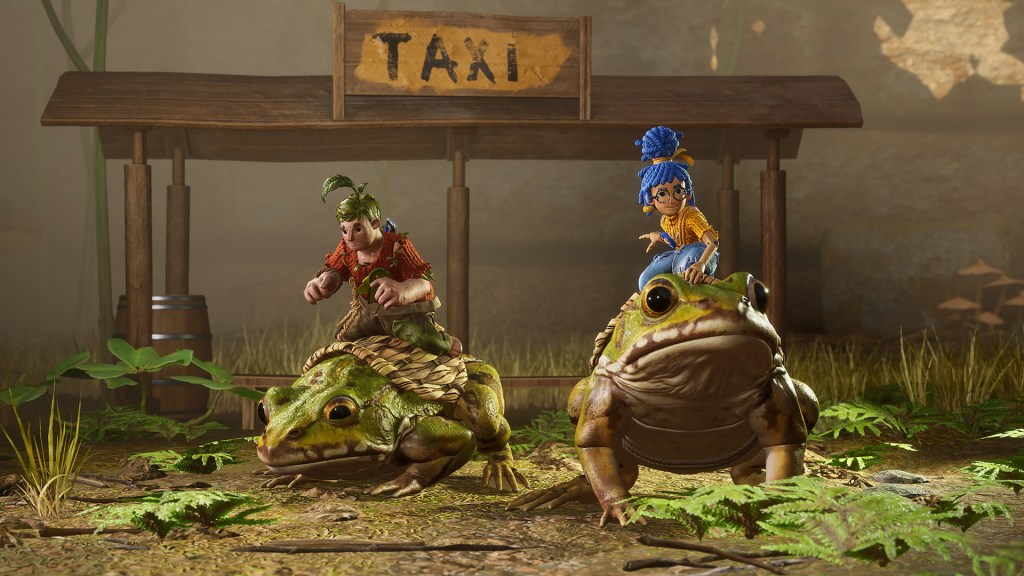 The creator of Brothers: A Tale Of Two Sons and A Way Out continues his obsession with co-op gameplay, with possibly his best game yet.

The history of co-op-only gaming is not one littered with too many major hits. Players are apparently fine with collaborative multiplayer like Among Us or Left 4 Dead, but from EA’s awful Army Of Two to A Way Out – the previous game by It Takes Two developer Hazelight – forcing players to find a friend to play with seems to be a generally unpopular move.

And yet here we are with another game that you can only play with someone else. Whether you buddy up online or in split-screen on a shared sofa, It Takes Two does indeed take two. It tells the story of a couple who decide to get divorced, and their young daughter whose tears of anguish combine with a well-timed wish to transfer both parents’ personalities into tiny dolls, who must work together to return to their normal forms.

As trite as that set-up sounds, the game’s semi-realistic graphics and warm sense of humour carry the day without resorting to saccharine cuteness, leaving you to enjoy an unexpectedly superb piece of entertainment that’s immeasurably enhanced by involving a friend. As in A Way Out, even if you’re playing online you only need one copy of the game, a friend pass letting your pal play without having to own their own copy. Given that co-op is your only option, it’s an essential piece of generosity.

Picking a parent-doll each, players leap straight into the action, which takes place in various rooms and areas around the family’s house and garden. Seeing everything from a mouse-like perspective lends each realm a Brobdingnagian feel that’s enhanced by the wonderfully detailed environments, each of which has been amped up into a fantastical setting.

Whether it’s fighting heavily militarised squirrels and their enemies, the wasps, in a sprawling hollow tree, or playing through space levels with their occasional zero-G and size-changing mechanics, everything is made more exciting than the real world alone would allow. That goes for the bosses too, which reinvent everyday objects as titanic baddies to be dispatched in imaginatively cooperative ways.

Each area you encounter adds its own mechanics. In one, your miniature heroes are armed with a claw hammer and a throwable nail. From those two simple tools, dozens of brilliantly engineered challenges flow, with the nail used as a fulcrum to swing across wide gaps, or to hold portals open while the plucky dolls dash to the other side. Meanwhile the hammer can thwack special buttons, shatter obstacles, and if you like, pound the other doll into the ground.

Although it lacks Double Dragon’s ability to simply fight the other player or kick them off high platforms, there are many points where you can abuse the game’s mechanics for fun, as well as 25 mini-games that pit player against player, a lot of which provide WarioWare style bite-sized entertainment. QTE-based rodeo bulls, a button-mashing tug of war, and a two-player tank battle played on colourful handhelds are complemented by dozens of others, all of which are playable on their own once you’ve unlocked them.

The more frequent collaborative sections are just as involving. Rather than settle for parity between the two dolls, many of the mechanics are asymmetrical, with each parent having a different job to do in order to win the day. There are plenty of moments where trust and timing are essential, as one player pops out platforms for the other to hop onto, a second’s hesitation or mistakenly hitting the wrong platform means the other’s instant demise. Depending on your relationship with player two, any one of these is a good time for trickery and general fooling around.

That turns out to be the true magic of It Takes Two. Mechanics are used, explored, and then rapidly discarded before hopping you onto a plunging rollercoaster ride to the next level, but everywhere you go there’s fun and silliness. Moments of real challenge are bookended by hilarity and foolishness, some scripted but much of it emergent, both intended and very much not. It makes for an uproarious good time that absolutely needs conversation, not just for the sake of timing, but also for playful taunting.

Kingdom Hearts series out on PC and already discounted

It Takes Two is not unblemished, with perhaps its worst solecism being a lack of save points. If you’re playing locally on a PlayStation 5 and you don’t have any other games you want to play, it’s not so bad, but if you have to reload the game it defaults to its last auto-save, which can sometimes be a lot further back than you might anticipate. With brief, mostly straightforward mechanics it’s not normally too fun-destroying but could easily have been avoided.

It doesn’t matter though. Playing It Takes Two feels like an unending fairground ride of bright colours, crazy characters, and elegantly engineered co-op challenges, with some very clever level design and moments of hilarity and friendly rivalry. It works beautifully not just because of its ingenuity but because having a friend present through the shared experience becomes a continual catalyst for entertainment. As a proof of concept that co-op-only works, it turns out that Hazelight Studios were right all along.

In Short: A joyful, colourful, and hugely inventive cavalcade of co-op antics that makes superb use of having two players for both its unique challenges and unscripted hijinks.

Cons: Infrequent and poorly flagged save points. Occasional moments when you just need the other player to suck less, and you really can’t play this alone.