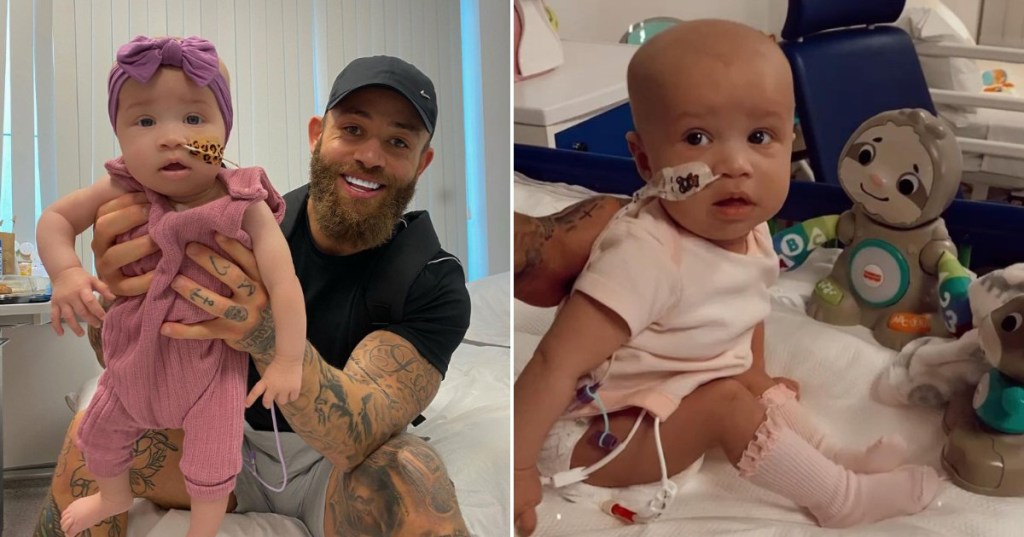 Ashley Cain says he is ‘eternally grateful’ for the staggering donations towards his baby daughter’s leukaemia treatment, which has surpassed £1million.

The Ex On The Beach star and his girlfriend Safiyya sent a desperate plea to their social media followers for help in raising money towards little Azaylia’s life-saving treatment.

The couple’s GoFundMe page originally had a goal of £1m but it reached £1.4m in less than 24 hours.

Reacting to the incredible achievement, Ashley said in his Instagram stories on Sunday night: ‘I am absolutely lost for words. I’m overwhelmed with the sheer amount of support that you guys have given us. You guys that shared the post, people that have donated.

‘Honestly, the amount of kindness that you have shown. The amount that you don’t even realise you have helped us is just incredible and me and my family are eternally grateful to you guys.

‘I’ve had the busiest day, with consultants, doctors, nurses, on the phone to pharmaceutical companies, looking after Azaylia.’

Ashley revealed that he was so busy running around all day that he didn’t even realise that they had reached their goal donations until hours later.

‘I didn’t even know ‘til tonight. I must have gone on my phone and seen thousands of messages. I thought they were gonna be saying that we’re close and the fact that we’ve hit it and we’re way above is just incredible,’ he said.

‘Thank you from the bottom of our hearts,’ he added.

Ashley’s fans and celebrity peers were moved by his earlier revelation that they have just one last option to save Azaylia’s life through CAR-T therapy.

The family will likely have to fly out to Singapore in a matter of weeks, with the treatment taking a minimum of a year.

Ashley, 30, wrote: ‘Our beautiful daughter Azaylia Diamond Cain was just eight weeks old when we got the heartbreaking news that she had been diagnosed with AML Leukaemia.

‘On diagnosis Azaylia had a frighteningly high leukemia count plus tumours in her spleen, stomach, lungs and kidneys which put her in critical condition and resulted in her being put into intensive care.

‘The doctors warned us that there was a high probability that she wouldn’t survive past the first round of chemotherapy due to the aggressiveness and rareness of her disease combined with her age.’

More: Ex On The Beach

It was discovered Azaylia was in the poor risk category for transplant success and high risk for fatal complications but she survived the engraftment process with minimal side effects.

Despite the transplant, it was found she still had traces of leukaemia, devastating news for the parents as they’d been told there was nothing more that could be done if it returned within a year.

Got a showbiz story?
If you’ve got a celebrity story, video or pictures get in touch with the Metro.co.uk entertainment team by emailing us celebtips@metro.co.uk, calling 020 3615 2145 or by visiting our Submit Stuff page – we’d love to hear from you.


MORE : Ex On The Beach’s Ashley Cain raises £1m in less than 24 hours for life-saving surgery for baby daughter