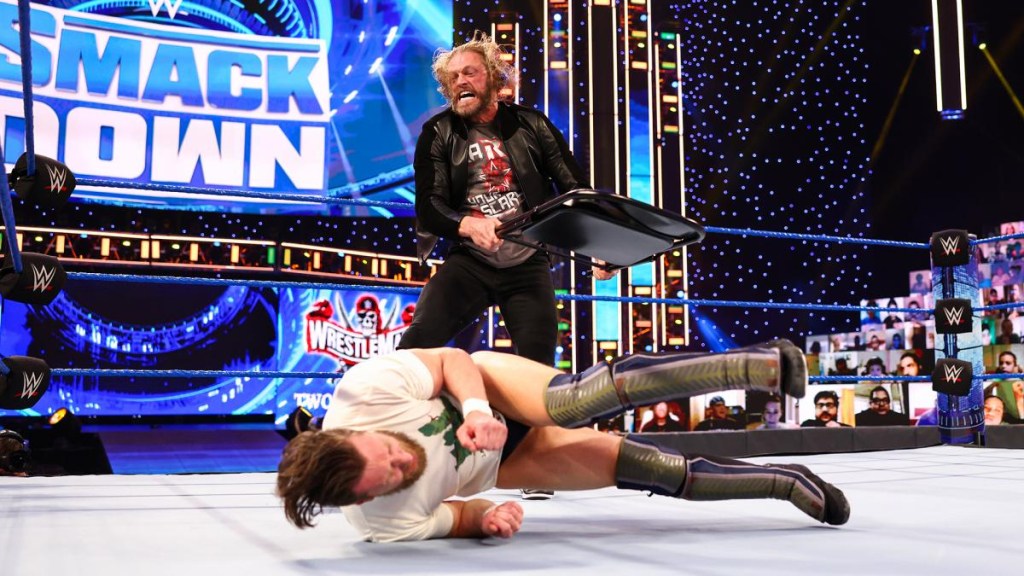 After weeks of speculation, the Universal Title match is confirmed with the 2021 Royal Rumble winner facing champion Roman Reigns and challenger Daniel Bryan in a Triple Threat match.

Bryan started the show with a steel chair in hand, recapping last Sunday’s Fastlane event including making Reigns tap out – which the referee didn’t see – and Edge’s betrayal at the end of the night which cost him the championship.

Initially, he demanded a rematch with the Tribal Chief. and refused to leave the ring until he got what he wanted, but WWE official Pearce came out insisting Roman’s next defence will be at Mania against Edge.

This prompted Bryan’s suggestion that the Royal Rumble winner could get his shot on night one of the huge event in three weeks, while he called for himself to get a shot the next night.

Out came the Rated R Superstar himself, back to his villainous and passionate best on the mic as he tore down the idea before the underdog went to take the fight to his newfound rival – only for Edge for drop him with a Spear before attacking him with a chair.

Backstage, Roman told Pearce that he would only be wrestling for one night at WrestleMania for one title defence, but Scrap Daddy – who later got threatened by Edge – promised a decision by the end of the night.

This led to a rushed but impactful final segment as the official gathered all three men in the ring and revealed they will clash for the Universal Title in the heavily rumoured Triple Threat.

The final moments with Edge almost hitting a conchairto on Bryan showed how personal this storyline has become, and signals the Rated R Superstar is truly embracing his heel roots – which is always where he excelled.

The opening match of the night saw Seth Rollins and Shinsuke Nakamura face off in a Fastlane rematch, with the SmackDown Saviour picking up a win in a great contest and attacking after the bell.

Cesaro rushed down in a sharp suit to defend his former tag team partner, hitting a huge uppercut on Rollins, who escaped before the big swing.

Backstage, he branded the Swiss Cyborg a failure and challenged him to what is sure to be a phenomenal WrestleMania match – but Cesaro wasn’t done as he interrupted the interview and hit a huge swing backstage.

Throwing it back to the ring, Intercontinental Champion Big E teamed up with Street Profits to take on Otis, Chad Gable and Apollo Crews.

It’s a shame the match didn’t go longer as what we did get was thrilling, and the right side won with Crews stealing a pin on Big E.

Elsewhere, Sami Zayn was a guest on the KO Show as he and Kevin Owens built towards the next chapter in their epic career-spanning rivalry.

Zayn came out and apologised for kicking his longtime friend and rival last week, and said he could still be part of the documentary, which is Logan Paul-approved with the YouTuber set for the red carpet trailer premiere next week.

KO still wasn’t interested, and eventually got round to his big question tonight, regarding a WrestleMania match between the two – which he accepted, sparking a ringside brawl.

Despite the best efforts of Sasha Banks, Bianca Belair was able to overcome the odds and beat Natalya to build a bit of momentum.

However, the Legit Boss attacked with a Backstabber after the bell to lay out her WrestleMania challenger, who slapped her during the match.

In the last match of the night, Rey Mysterio surely put himself and his son Dominik in prime position for a tag title shot at WrestleMania as he defeated Dolph Ziggler in a cracking match.

There was a brilliantly nasty bump early on as the Show-Off sent Rey over the barricade before hitting Dominik with a Superkick.

With just three weeks to go, the SmackDown team really delivered tonight and stacked their side of the WrestleMania card, with more still to come.