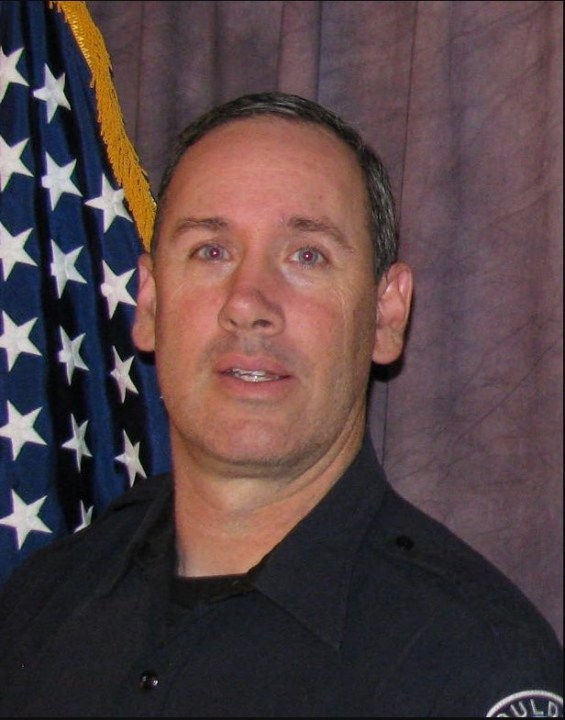 The officer was identified late Monday as 51-year-old Officer Eric Talley, one of the first on the scene. Ofc. Talley has been a member of the department since 2010.

“My heart goes out to the victims of this incident and I’m grateful to the police officers who responded,” said BPD Chief Maris Herold.

A shirtless man with blood running down his leg was escorted out of the store in handcuffs by two police officers. A local hospital confirmed receiving one patient from the active shooting scene.

Officers were initially called to the King Soopers in the southern part of the city of Boulder for reports of a man shot in his vehicle, NewsNation affiliate KDVR-TV reported.

When officers arrived the suspect began shooting at them, police said.

Officers had their guns drawn, and some windows at the front of the store were broken. Authorities over a loudspeaker said the building was surrounded and that “you need to surrender.” They said to come out with hands up and unarmed.

Television helicopter video showed many law enforcement vehicles and officers outside the store and at least three helicopters on the building’s roof.

The Bureau of Alcohol, Tobacco, Firearms and Explosives responded to scene and the FBI Denver field office is also assisting.

Witness Daniel Douglas said he was in the store grabbing lunch.

“As we were waiting on the pizza and we started hearing gunshots. It sounded like someone was breaking the glass at first,” Douglas said. “We started screaming and hit the ground.”

Douglas said a lot of people were crying.

“My nerves are so racked right now I’m having a hard time talking,” he said.

Another witness told KDVR that they had just left the store after checking out and heard what sounded like fireworks.

Law enforcement SWAT teams from Jefferson County and Boulder were dispatched to the market.

“Not one is like the other but interestingly we’re seeing this again in Colorado where we saw Columbine and the movie theater shooting in Aurora that actually set new standards for how we respond to this,” former FBI Special Agent Phil Andrew told NewsNation.

Colorado Gov. Jared Polis issued a statement Monday on the events at the supermarket.

“Like my fellow Coloradans, I am closely watching unfolding events at King Soopers in Boulder. My prayers are with our fellow Coloradans in this time of sadness and grief as we learn more about the extent of the tragedy,” Polis said.

Police added the community is no longer in danger.

“Our hearts are broken over this senseless act of violence,” said a spokesperson from King Soopers at the news conference. She added that they will be working closely with law enforcement while they investigate the shooting.

Download the free NewsNation Now app to receive updates on this developing story.