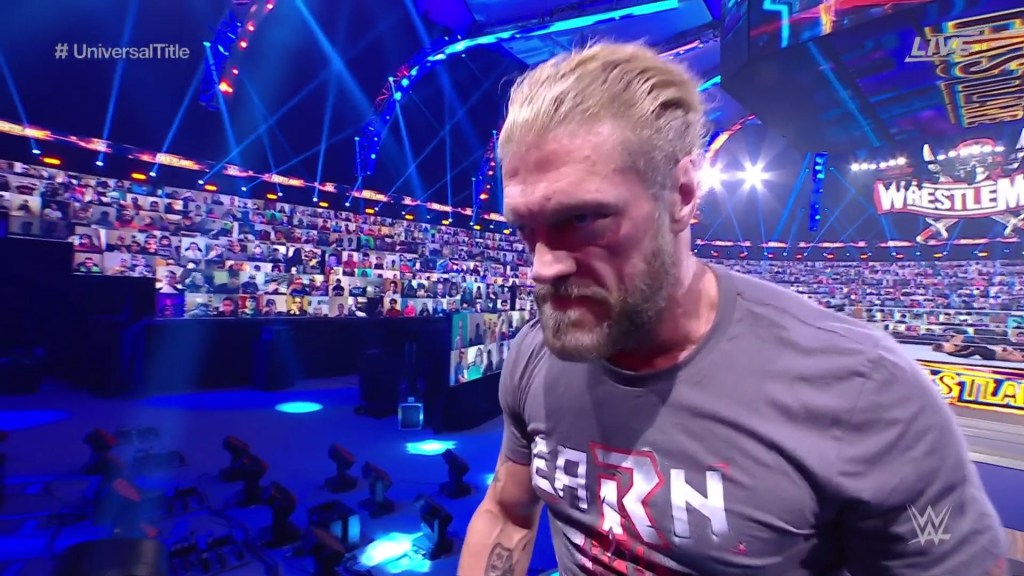 WWE Fastlane ended on an incredible high as Edge snapped and battered both Daniel Bryan and Roman Reigns as the latter barely retained his Universal Championship.

The Rated R Superstar was the special guest enforcer at ringside for what was an absolute barnstormer of a main event with the company once again delivering a stellar pay-per-view, this time just weeks before WrestleMania 37.

On a night with plenty of surprises and storyline progression, the best in-ring action was saved till last as Reigns and Bryan put on an absolute clinic, even by the latter’s lofty technical wrestling standards.

The Tribal Chief has been consistently fantastic with his storytelling since returning at SummerSlam last August, and it was no different here as he and his challenger delivered an instant classic worthy of the title they were fighting over.

Even the shenanigans weren’t enough to ruin this, with what unfolded giving WWE a perfect way to deliver a dream Triple Threat match at the Show of Shows next month.

Reigns avoided a running knee from Bryan, whose signature strike accidentally hit the referee instead, sending him flying out of the ring.

From there, Edge jumped in as the enforcer to take over the duties, but Jey Uso arrived and took him out before the Universal Champ could submit to the Yes Lock.

Bryan fought back and accidentally clocked the Royal Rumble winner with a steel chair, before putting in his submission hold once again – and this time Roman did tap out for the first time in his WWE career.

However, there was no official around to see it, and once Edge came to he was in a foul mood as he destroyed both men with the chair, leaving them both battered and storming off absolutely seething.

Reigns was able to win to retain, and now the Ultimate Opportunist might be leaving his return’s honeymoon period behind him to go back to the villainous ways that made him a legend in the first place.

The WWE Fastlane Kickoff was more newsworthy than most pre-shows, with Riddle successfully defending his US Title against Mustafa Ali in an entertaining sprint.

That wasn’t the headline though, as the moment everyone will be talking about saw RETRIBUTION turn on their leader, with Reckoning and Slapjack walking out before T-Bar and Mace hit a double chokeslam.

Onto the main card, the opening match was for the Women’s Tag Team Championships, with Nia Jax and Shayna Baszler keeping hold of the gold in a fun bout with Sasha Banks and Bianca Belair.

Reginald played into the ending as ever, but thankfully the Legit Boss and the EST of WWE added some fire to their upcoming WrestleMania 37 match with the former landing a huge slap on her rival.

Anyone expecting a definitive match between Apollo Crews and Big E were kidding themselves, as the pair deserve an Intercontinental Championship clash at the Show of Shows.

This was a great way to build to it, with the champ looking like an absolute beast at first, before a very fun – albeit brief – match ended with him retaining in a fluke.

After a backstage segment, Elias – flanked by Shane McMahon and Jaxson Ryker – was ready to play a song in the ring in an attempt to earn Bad Bunny’s Grammy.

However, Shane O’Mac – who was ‘hurt’ while training for his match with Braun Strowman – quickly announced that Elias was his replacement against the Monster Among Men.

Ryker tried to distract Braun at one point and Elias got in a bit of offence, but really this was Strowman looking strong before he throws around the McMahon son at Mania.

Up next, Shinsuke Nakamura and Seth Rollins put on an absolute clinic with one hell of a match from start to finish.

Both men deserve credit for what was undoubtedly the best of the night thus far, and it was the right result as Rollins picked up a big win after his recent comeback, building momentum before his expected WrestleMania showdown with Cesaro.

Some superstars might be intimidated following that match, but Drew McIntyre and Sheamus are no ordinary wrestlers.

The two former friends battled it out in a brutal No Holds Barred match – their third WrestleMania-worthy match this month – which spilled all over the ThunderDome.

They more than delivered on the stipulation and then some, with McIntyre winning with a Claymore as he goes onto face Bobby Lashley for the WWE Championship at WrestleMania 37.

Meanwhile, the last match before the main event saw Alexa Bliss defeat Randy Orton in a supernatural clash more akin to a horror film than a WWE contest.

From falling lighting rigs to a wall of flames, Bliss used her powers to play with the Legend Killer before The Fiend made his predicted return looking burned to a crisp after his Inferno Match with Orton back in December.

We’re officially on the home stretch of the Road to WrestleMania, and WWE left fans will plenty to get excited about.