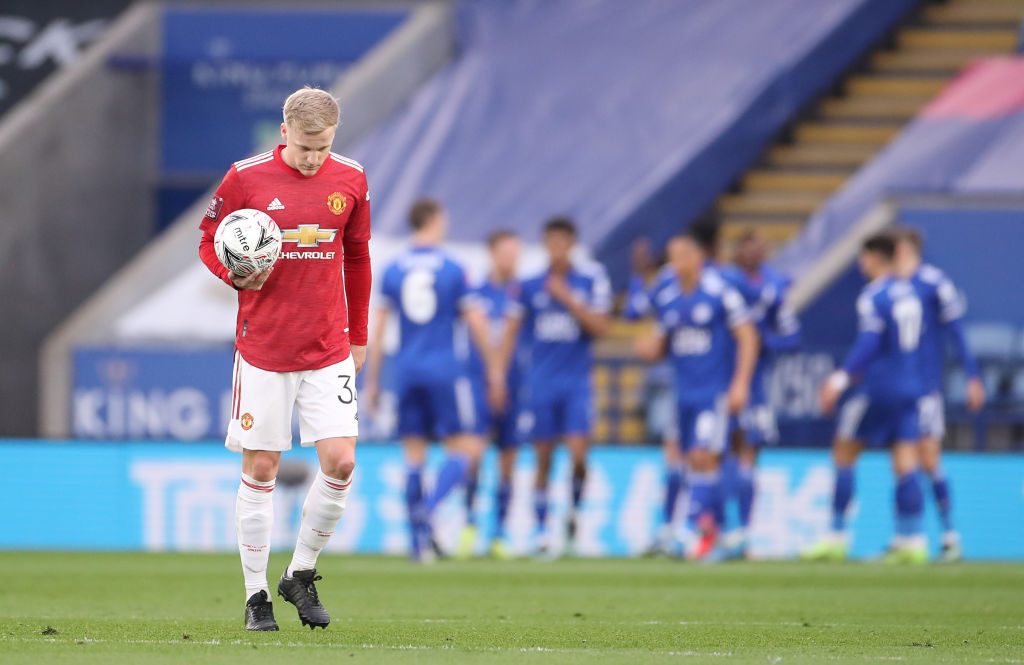 Solskjaer made five changes to the team that beat AC Milan on Thursday to reach the Europa League last eight, with Van de Beek one of the players who was afforded a starting berth.

The 23-year-old arrived at United from Ajax last summer in a deal worth £40million but he has struggled for regular game time at Old Trafford.

Van de Beek’s opportunities have mostly been limited to cup competitions and he has started just two games in the Premier League.

The Netherlands international produced a clever dummy to get United back on terms against Leicester after Kelechi Iheanacho capitalised on Fred’s poor back pass to opening the scoring after 24 minutes at the King Power Stadium.

But in the second half, Youri Tielemans’ strike and Iheanacho’s second of the game sealed a deserved win for the Foxes as they side booked a meeting with Southampton in the FA Cup semi-finals.

And Van de Beek, who was taken off after 64 minutes due to his lack of match fitness, looked lost on the pitch, according to United legend Hughes.

‘Clearly it’s difficult, he hasn’t had enough game time and you can see that in his play,’ Hughes told Stadium Astro.

‘He’s wandering and not really getting on the ball, doesn’t know how to affect the game, can’t demand the ball of his team-mates because they’re not quite sure whether or not they have enough confidence in him.

‘He looks like a guy who’s wandering around lost on the field. Okay, some of that responsibility he has to take on himself, he has be more demonstrative, he has to be a key player. He’s a big-money signing he’s come from a big club in Ajax so he’s used to being a top player of influence.

‘But clearly, since he’s come to United he hasn’t shown anything like what the level he needs to be at to remain a Man United player.

‘He can only have so many opportunities, at some point he’s going to have to take them or United will move him on. I think they’re edging towards that decision if he’s not careful.’