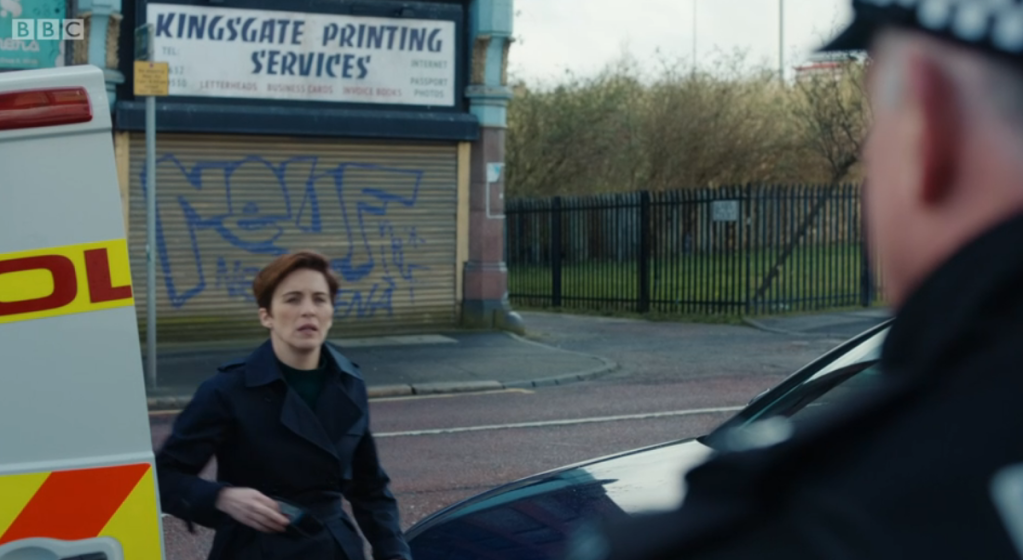 Line of Duty fans who tuned in to the launch episode of season six spotted a throwback to an earlier case.

In the new episode, which aired on Sunday, DI Kate Fleming (Vicky McClure) arrived at a block of flats to get an update on the search of suspect Terry Boyle’s (Tommy Jessop) flat in connection to the murder of a journalist.

As she arrived at the building, directly over the road behind her was Kingsgate Printing Services.

Fans will recognise the shop as the hideout of John Corbett (Stephen Graham) and his literal partner in crime Lisa McQueen (Rochenda Sandall) in season five.

The pair, along with the other members of the organised crime group (OCG), used it to print fake passports.

John was eventually killed by the OCG who had cottoned on to him being an informant for the police. Lisa meanwhile was arrested and after being interviewed by AC-12 was placed under witness protection.

Kate also appeared to note the familiar building as she arrived in season six, stopping for a second to look at the shop front which Terry lived opposite. Could it be significant once again? Viewers seemed to think so.

Terry first appeared in season one, then played by Elliott Rosen, and was used by the crime group to stash away evidence of their misdeeds.

His freezer was used to store the body of Jackie Laverty – a business woman who was murdered by the OCG in season one – which as of season five was still there.

However in episode one of season six it was suggested that the freezer had been removed and Terry’s flat mysteriously cleaned down.

Season six ended with more questions than answers – of course – not least of all what DCI Davidson is really up to.

Line of Duty airs Sundays at 9pm on BBC One. Episode one is available on BBC iPlayer.


MORE : Joe Sugg had ‘terrible imposter syndrome’ during acting debut in The Syndicate