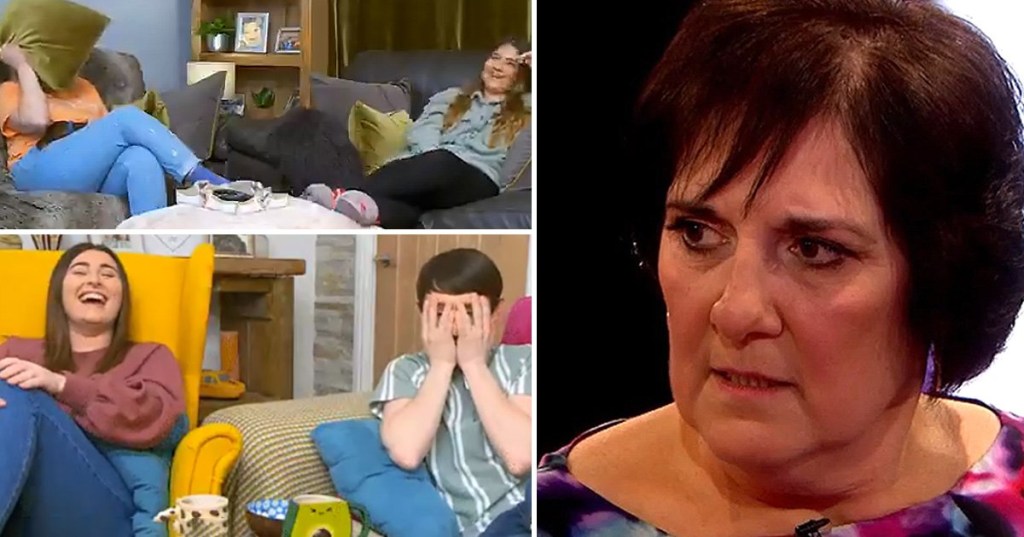 Gogglebox’s families were left speechless after watching a clip of a devout Christian on Naked Attraction.

The families and viewers at home were treated to a clip of Naked Attraction where 57-year-old Judith was tasked with choosing a partner based only on seeing them naked.

However, the families were stunned to find out Judith was a devout Christian – especially after her NSFW comments about the naked men on offer.

When asked how experienced she is sexually, Judith replied: ‘Well, at my age, I have no inhibitions.

‘It’s a think I’ve missed out on, is a regular sexual relationship and it’s a waste – I’ve got a nice vagina!’

Lee and Jenny were seen gasping in shock at her comments – but things were only going to get more graphic.

Judith was seen appraising the men on offer, exclaiming: ‘God, what a c**k! Well, I can take that.’

Sophie and Pete Sandiford were seen choking on their cups of tea after Judith revealed that her preferred size of penis was up to 11 inches, joking that that would be ‘up to her chest’.

The revelation that sent the families into shock was when Judith revealed she had a bit of a foot fetish, with Ellie and Izzi exclaiming: ‘F**king hell, Judith!’

It wasn’t all explicit comments, however, as Judith then sat at a piano to play The Lord’s My Shepherd – aka the theme song to Vicar Of Dibley, as the naked men gently swayed in their booths.

Louis from the Michael family summed it up perfectly when he joked: ‘Just when you thought it couldn’t get any more surreal, she whips out a piano and does a one-woman show. To the penises.’

Viewers were just as shell-shocked by what they’d witnessed, tweeting: ‘I reacted in the exact same way to this episode of Naked Attraction as everyone else did on Gogglebox. I am deceased’.

Gogglebox Cast 2021: Meet the families – from the Malones to the Vens

Who is the narrator of Gogglebox?

Others added: ‘Watching the Goggleboxer’s reactions to Naked Attraction could be a full one hour show in itself’ and ‘Best episode of #Gogglebox in ages. Literally crying at #NakedAttraction.’

Gogglebox airs on Fridays from 9pm on Channel 4.


MORE : The Circle stars hit with brutal double blocking as Tally twist comes to a head