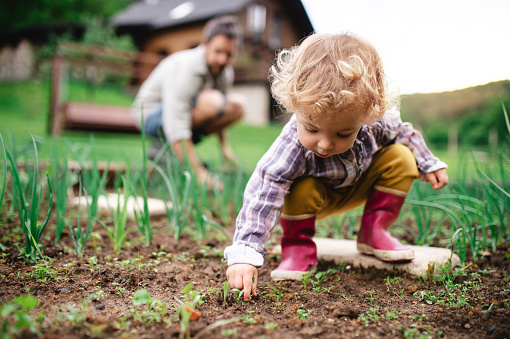 Those of you who are green-fingered or avid growers have surely been counting down the days until spring sprung so you could get back to your gardens and allotments.

From blooming roses to hearty potatoes, a bit of effort and know-how is essential in a successful harvest.

So, as the days start to get brighter and the country looks forward to lockdown easing and more time being spent outdoors, here’s what you need to know about growing gorgeous flowers and bountiful veg.

How to prune roses

The secret to the sweetest smelling roses is knowing when to prune them; it’s not enough to just plant some seeds and hope they grow.

Pruning serves the purpose of getting rid of any dead wood which helps avoid pests, improve circulation to the plant, shape the plant, and encourage new growth.

Pruning is something of a thankless task, but it’ll definitely be worth it when those beautiful roses come through in the spring.

Roses start to grow again after the last frost of spring.

That’s why the best time to prune your roses is around February or March here in the UK.

You can also work out when to do this by looking at the bumps on the canes of your rose bush. When they start to swell and get redder, it’s time to prune.

Once they’ve burst, it’s too late.

Just to make things more complicated, though, different breeds of rose will have slightly different times when they need to be pruned and how to do so.

For example, with modern shrub roses you should avoid trimming them at all for the first two years then you prune a third of the dead stems each year. However, with Hybrid Tea Roses, you have to prune everything or they simply won’t bloom.

The best thing to do is check the label of the type of roses you have, which will give you a more exact timing.

Some people also like to use PVA glue on the ends of the canes they’ve freshly cut. This is mainly useful if there is an issue with pests on the area.

How to prune hydrangeas

Perhaps you prefer the different shades of a hydrangea bush to the classic rose.

Hydrangeas also need some TLC to reach their full potential, but according to Gardener’s World, hydrangeas are an exception to the rule that says shrubs that produce their flowers on the previous season’s growth should be pruned after flowering.

The structure of hydrangea stems means it’s best to leave cutting back until spring.

This is because the stems are cork-like, rather than woody, and hold enough moisture inside them during winter for this to freeze in frosty weather. If they are pruned too soon after flowering, the buds can freeze, killing the stems and their buds.

Once the sap starts to rise in spring, hydrangea buds will open and many should go on to carry blooms the following year.

When these buds start to appear, that’s the best time to ‘deadhead’ the weaker stems and old flowerheads.

To do this, cut carefully using the tips of a pair of secateurs.

Cut out any thin or breaking stems around the base of the plant and remove one or two of the largest, oldest stems from as low down as possible to promote new shoots from the base.

When to prune lavender

Celebrated for its instantly recognisable, soothing scent, lavender is never better when plucked fresh from your own garden or allotment.

Lavender is best planted in spring, in free-draining soil, somewhere where it can thrive in full sun.

Lavender flowers in late spring and summer, but can become woody and ungainly if left unattended.

Therefore it’s best to trim them annually in late summer, just after flowering has finished.

Remove any spent flower stalks and about one inch of leaf growth.

Foliage can be clipped over in spring if growth is untidy or frost damaged.

Lavender does not break new growth easily from old stems so don’t cut back into the woody stems.

When to plant potatoes

Whether you’re trying to become more organic and reduce waste, or you’re just into experimenting with your own produce, you might be thinking about growing your own potatoes.

Potatoes are best planted between March and May, ready to be harvested between June and October.

Potatoes are grown from seed potatoes, or tubers.

To grow your own potatoes from these seeds, you should chit the seed potatoes before planting them to allow them to start sprouting shoots.

The Royal Horticultural Society (RHS) state: ‘Stand them rose end up (the end with the smallest dents, or eyes) in egg boxes or trays in a light, frost-free place.

The potatoes are ready to plant when the shoots are about 3cm (one inch) long.

With early potatoes, rub off the weakest shoots, leaving four per tuber.’

When they’ve had time to grow, you can plant potatoes around late March.

The RHS explain: ‘Avoid planting in a spot prone to late frosts, as the newly emerging foliage is susceptible to frost damage in April and May.

Prepare the ground, ideally the previous autumn or winter, by digging in plenty of organic matter such as garden compost or well-rotted manure.’

Then, apply a general-purpose fertiliser.


MORE : How to start an allotment