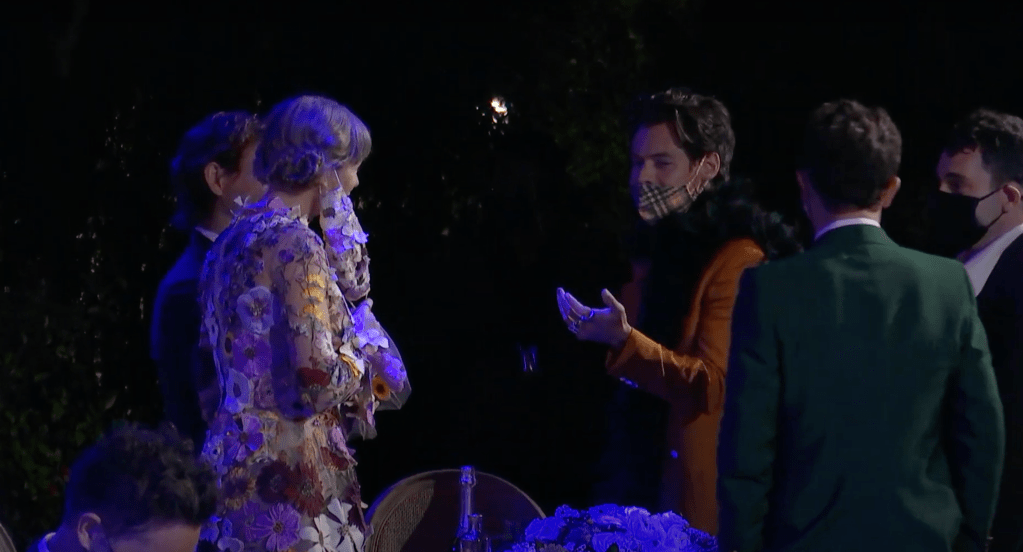 Harry Styles and Taylor Swift have been spotted having a sweet catch up backstage at the Grammys after both of them bagged awards on the night.

The former couple were caught on camera having an animated conversation at Taylor’s table after the Grammy Awards had finished up and it definitely didn’t look like there was any Bad Blood between them.

Taylor, 31, and Harry, 27, had dated in late 2012 but their brief romance ended up being immortalised in some of Taylor’s music.

It appears the two of them have a great friendship though, as earlier in the night Taylor was seen cheering Harry on when he won his first ever Grammy for Watermelon Sugar.

Harry was over the moon to bag the award for best pop solo performance, telling the handful of celebrities that made up the audience that he was ‘very honoured’ to be recognised.

He had been up against Justin Bieber for Yummy, Doja Cat for Say So, Billie Eilish for Everything I Wanted, Dua Lipa for Don’t Start Now and Taylor Swift for Cardigan but emerged victorious.

Harry told reporters after accepting his award: ‘I feel incredibly lucky to get to work in music and make music as my job every day and this is an incredibly sweet icing on the cake of what I get to do every day, so thank you so much.

‘And I want to thank my fans for giving me an environment to be free to make the music that I want to make and supporting me along the way over the last 10 years.

BTS beat Billie Eilish, The Weeknd and Drake to be named global recording artist of 2020

‘And everyone who made this record with me and my label and my managers and everyone who supports me and everything, all of it, thank you so much. I feel very, very lucky tonight.’

Harry had racked up a total of three nominations, including best pop vocal album for Fine Line and best music video for Adore You.


MORE : Grammys 2021: All the must-see performances from Harry Styles to Dua Lipa and more


MORE : Grammys 2021: Beyonce makes history as she smashes record for most awards won by a singer, male or female