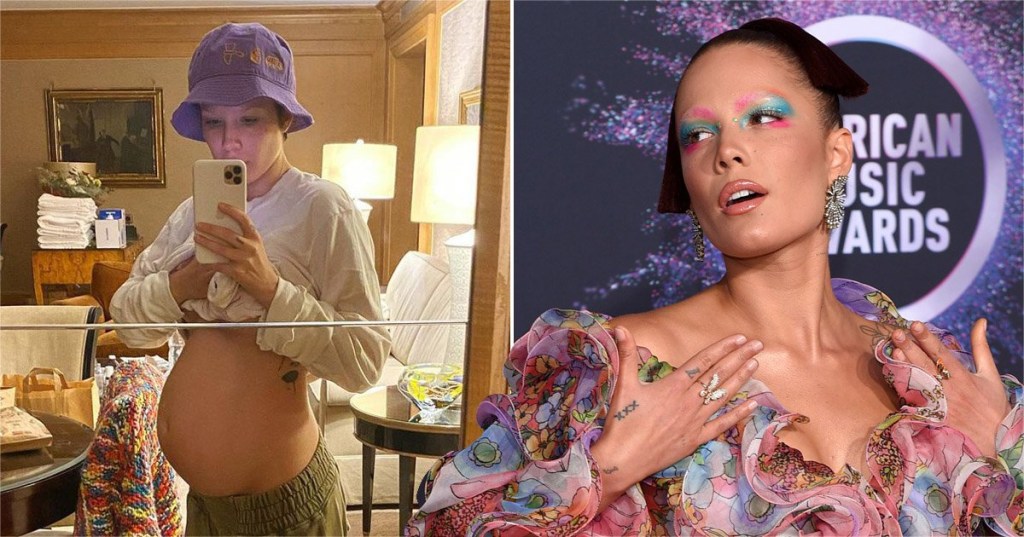 Halsey has shared a a cute new baby bump snap as she continues to document her pregnancy journey on social media.

The singer, 26, surprised many when she confirmed she was expecting her first child with partner Alev Aydin, after previously suffering multiple miscarriages and getting surgery to treat endometriosis.

After recently sharing a shot of her ultrasound, Halsey has since taken to Instagram to give fans an update on how she and the bump are doing.

She posted a mirror selfie of her pulling up her shirt to display her ever-growing baby bump, as she also donned green tracksuit bottoms and a purple bucket hat.

Halsey had previously announced she was pregnant after sharing the first pictures of her baby bump at the end of January.

‘Surprise!’ she wrote alongside the images.

He added: ‘Heart so full. I love you, sweetness.’

In response, Halsey replied: ‘I love you!!! And I love this mini human already.

Halsey and Alev have kept their relationship fairly private, but were spotted out and about together at the end of 2020.

However, fans had not been aware of the pair’s romantic relationship as the duo have been friends for several years.

It comes after the Without Me hitmaker hit out at those ‘speculating’ over how she became pregnant.

Halsey – real name Ashley Frangipane, wrote on her Instagram Stories: ‘Why is it OK to speculate and pass judgement about fertility and conception?

‘My pregnancy was 100% planned, and I tried very hard for this bb [baby]. But I would be just as happy even if it were another way.’

Halsey also revealed that being pregnant has changed her view of gender after ‘thinking a lot about my body’.

Checking in with fans on social media, she said: ‘February is the shortest month, but the days seem like they are taking very long. Butttttt also going so fast?!

‘I’ve been thinking lots about my body. It’s strange to watch yourself change so quickly.

‘I thought pregnancy would give me very strong, binary feelings about “womanhood” but truly it has levelled my perception of gender entirely.

‘My sensitivity to my body has made me hyper aware of my humanness and that’s all. Doing a remarkable thing. And it’s grand. I hope the feeling lasts.’

She added: ‘I cook a lot, sleep even more, and read lotssss of books. I miss my family. And you guys too! Bye for now. (sic)’


MORE : Selena Gomez denies claims she is dating Only Murders In The Building co-star Aaron Dominguez