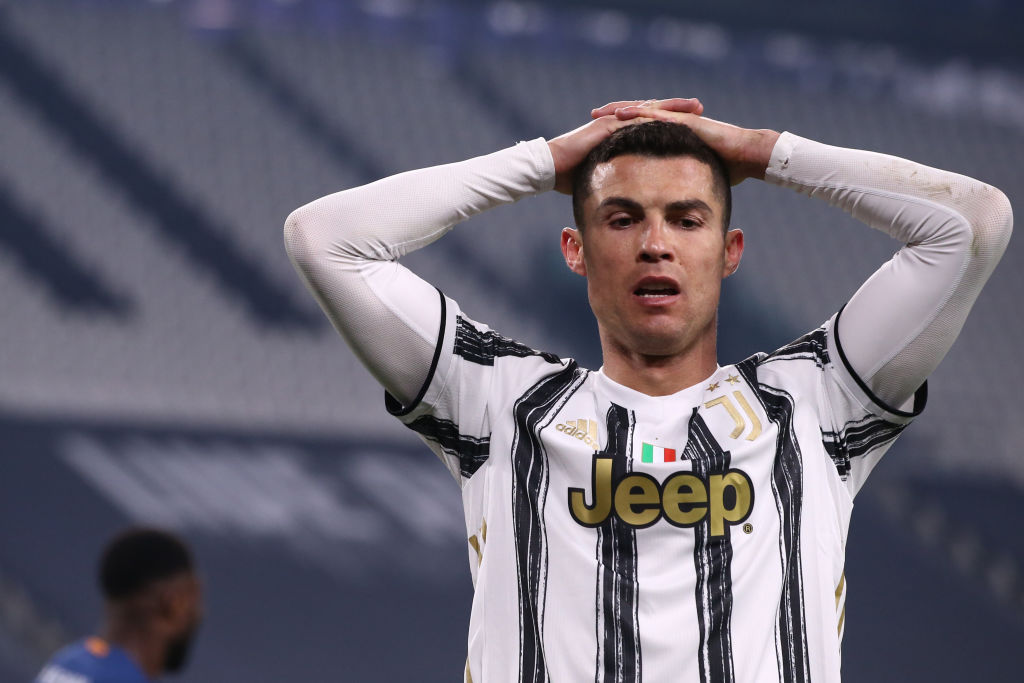 Cristiano Ronaldo’s future at Juventus is unclear after the team crashed out of the Champions Leageu at the hands of Porto on Tuesday night and director Fabio Paratici said the superstar’s contract is ‘not an immediate issue.’

It was a wild night in Turin as Juve looked to overturn a 2-1 deficit from the first leg against the Portuguese side in the last 16 of the competition.

Things looked bad for them at half-time, 1-0 down in the second leg, but two goals from Federico Chiesa took the contest to extra-time.

Sergio Oliveira smashed home a free-kick, leaving Juve needing two more goals, one of which they got through an Adrian Rabiot header, but they couldn’t find another, so they won the leg, drew the tie 4-4, but lost out on away goals.

Ronaldo was left partially to blame for the exit as he was in the wall for Oliveira’s free-kick which was not especially well hit and went through the former Manchester United man’s legs as he turned his back on the ball.

The 36-year-old is in his third season at the club and he is still yet to win the Champions League with the Italian champions, which was the main purpose of his big-money signing from Real Madrid.

Ronaldo still has another year on his contract after the end of this season and while Paratici is not ruling out an extension, he is in no rush to sort it out any time soon.

‘There’s still another year of contract,’ Paratici told Sky Sports. ‘Cristiano’s contract renewal is not an immediate issue on the agenda, there’s time to talk about it.’

Juventus have fallen at the last 16 stage of the Champions League and are third in Serie A, 10 points behind leaders Inter and four behind second-placed AC Milan.

The pressure is mounting on rookie manager Andrea Pirlo, but he insists he has a long time left in the role.

‘I’ve been called here to do a job at Juventus,’ Pirlo said after the Porto epic. ‘We have a project, a long term plan. I’ll continue my work calmly.’