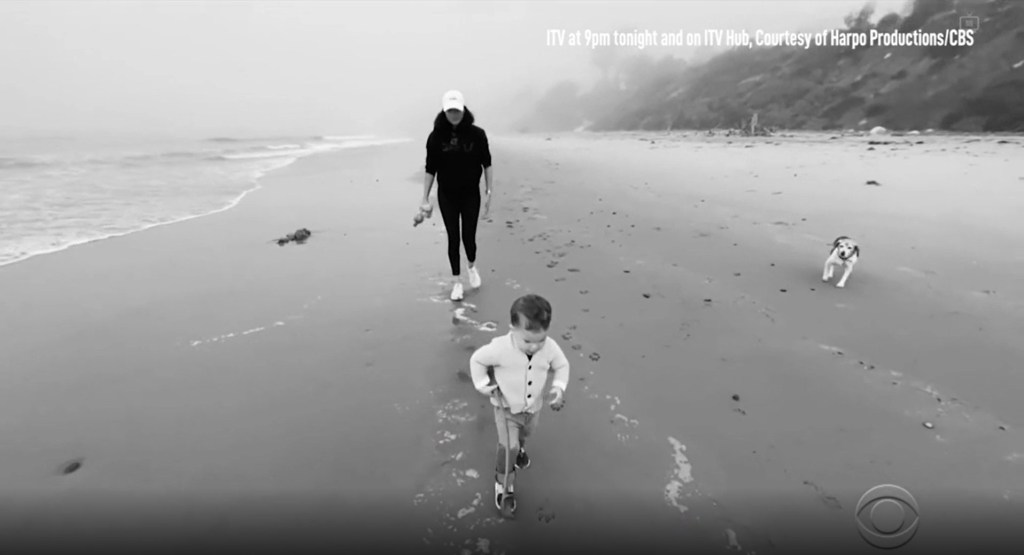 Prince Harry and Meghan Markle have shared touching footage of their son Archie playing at the beach in California.

In the never-before-seen video, he is seen running around in the surf with his mother, along with one of their dogs.

The toddler, aged one, looks more grown up than in previous pictures, now with a full head of hair.

His parents revealed he is now chatting away, and particularly enjoys the word ‘hydrate’.

They also revealed the gender of their new baby, saying they are expecting a little girl, due in the summer.

Harry, who broke the news, said it was ‘amazing,’ and said he was: ‘just grateful, to have any child, any one or any two.

‘To have a boy and then a girl, what more can you ask for,’ Harry said. The couple added that they were ‘done’ and do not plan to have any more children.

The news came after the duchess suffered a miscarriage last summer,

Meghan revealed her miscarriage in November last year in a deeply personal article for the New York Times, writing: ‘I knew, as I clutched my firstborn child, that I was losing my second.’

In their bombshell interview with Oprah Winfrey, screened tonight in the US and tomorrow at 9pm on ITV, the couple said felt they had no choice but to step back as senior royals.

Meghan said that the pressures of life within the family drove her to thoughts of suicide, saying that she tried to seek help but was discouraged from doing so because of how it would look.

Prince Harry revealed that his relationship with his father has broken down, saying that Prince Charles had stopped returning his calls.

He said his relationship with brother William was now just ‘space’ although he hoped that time would heal the rift.

Also in the interview, he said that early on in his relationship with Meghan, a family member had raised concerns about the skin colour of their future children.

Not revealing who had said this to him, he said: ‘That conversation I’m never going to share. At the time it was awkward. That was right at the beginning. “What will the kids look like?”’

Harry said that he had felt ‘trapped’ within the Royal Family, but would have remained within it if he had not met his wife.

Asked if Meghan had ‘saved’ him, he said: ‘Yes, without question.’

She added: ‘You need to want to be saved.’