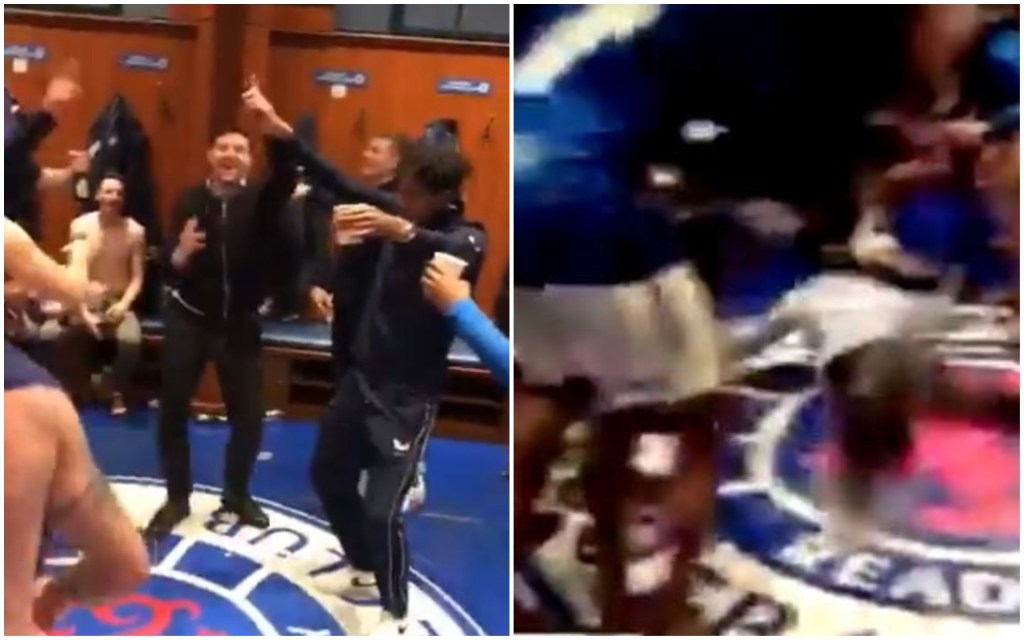 Steven Gerrard was at the heart of the celebrations inside Rangers’ dressing room as his side closed in on the SPL title.

A 3-0 victory over St Mirren at Ibrox means that Rangers will be crowned champions on Sunday if Celtic drop points against Dundee United.

And the wild scenes outside Ibrox were replicated inside the stadium as Gerrard and his Rangers players celebrated after beating St Mirren.

Videos have surfaced of Gerrard joining in the dancing and singing with his squad.

The former Liverpool captain also slid across the dressing room after the Rangers players covered the floor with their drinks.

Speaking after Rangers’ latest victory, Gerrard, whose car was mobbed by fans as he drove to Ibrox on Saturday, admitted he was overwhelmed by the reaction from the supporters.

‘It’s tough because we’re so close. And it’s been a long journey over the three years,’ said Gerrard.

‘There have been some highs and lows in there. But I’ve just walked into a happy dressing room, because we’re so close now.

‘When I turned up at the stadium today, it was emotional. You could see on the fans’ faces what it meant.

‘How are my emotions right now? Bubbling. I’m obviously really happy and proud. I can relate to these emotions that I’ve had as a player.

‘At the same time I want to stay controlled because it’s not confirmed as of yet. But I think everyone knows it’s 99.99 per cent done.’