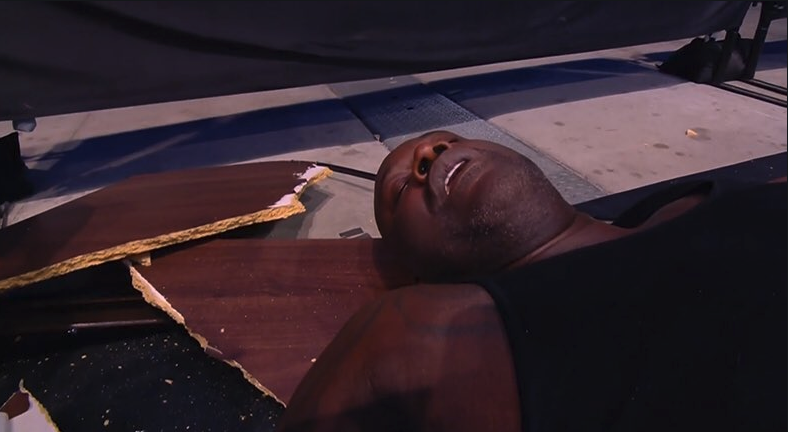 Shaquille O’Neal crashed through a table and was stretchered out of the arena into an ambulance after his AEW Dynamite debut.

The NBA legend teamed up with Jade Cargill on Wednesday night’s show against Cody Rhodes and Red Velvet, and while Shaq’s team picked up the win, he wasn’t involved in the ending.

Towards the end of a contest which saw Rhodes bodyslam the towering basketball icon, Jade’s plans backfired after she set up a table at ringside only for O’Neal to go crashing through it courtesy of a crossbody from Cody.

Following the match, Shaq – who also paid tribute to the late, great Brodie Lee during the bout – was stretchered out and into an ambulance backstage, although there was still more of a twist to the tail.

When AEW’s Tony Schiavone when to get an update after the bout, he was stunned when he opened the ambulance doors to discover the debuting star was nowhere to be seen.

It’s unclear what the company’s plans are with O’Neal moving forward – besides the almost certainty of a dream match with Paul Wight after WWE struggled to get Shaq and Big Show booked for WrestleMania in the past.

The aftermath of his first match certainly poses plenty of questions.

Going into his debut, Shaq didn’t seem fazed by the task in front of him.

‘Oh I’m winning. Guaranteed,’ he told Associated Press before the match, which turned out to be true. ‘I’m the type, I can never back down from a challenge.

‘I’m not a professional wrestler, but I’ve been in a match before. I’ve got a lot of moves in my arsenal. When you step inside somebody’s world, you have to stick to what you’re masterful at.

‘I’m not acrobatic. I’m not going to be jumping off the ropes. I’m coming with the power game. When I get hands on him, I’m going to display this power.’

Wrestling has a long history of active or retired athletes who have crossed over into the world of sports entertainment, from the likes of Dennis Rodman and Mike Tyson to Lawrence Taylor and Pat McAfee.

Shaq teased: ‘This one will top them all.’