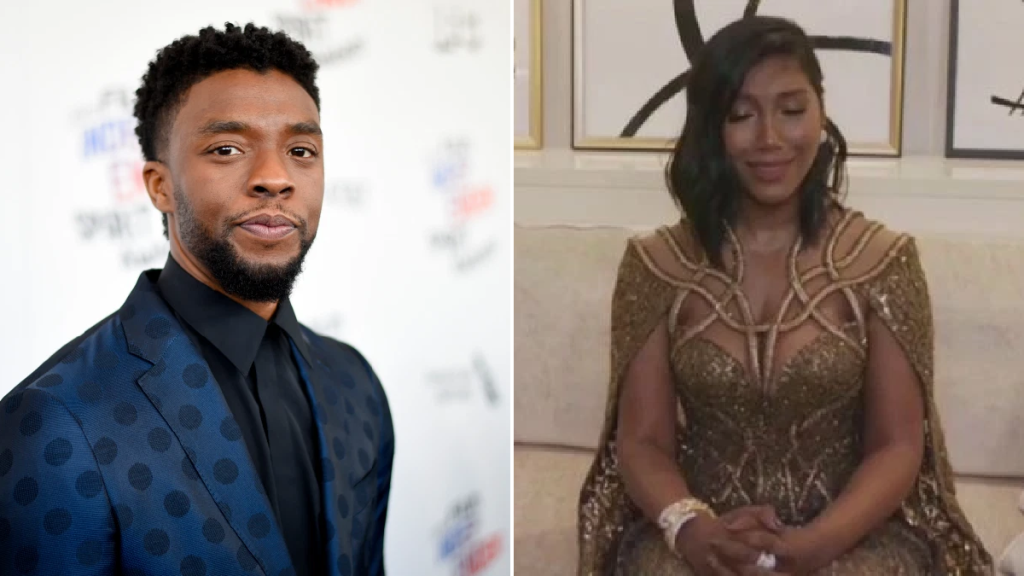 Chadwick Boseman’s widow couldn’t hold back her tears as she accepted the late actor’s Golden Globes award in an emotional tribute.

The Black Panther actor died in August at the age of 43 following a private battle with colon cancer.

His wife Taylor Simone Ledward made a surprise appearance on Sunday evening after it was revealed that the actor had been honored posthumously with the gong for best actor in a motion picture – drama.

The late star won the award for his portrayal of an ambitious trumpeter in the Netflix film Ma Rainey’s Black Bottom, which was his final role.

‘He would say something beautiful, something inspiring, something that would amplify that little voice inside of all of us that tells you, “You can,” that tells you to keep going, that calls you back to what you are meant to be doing at this moment in history.’

After making it through her speech, the emotional widow concluded: ‘I don’t have his words but we have to take all the moment to celebrate all we love, so thank you, HFPA, for this opportunity to do exactly that.’

Viewers instantly flocked to social media to praise the grieving widow for her moving words and her poise during the occasion.

One wrote:’The strength and grace and beauty of Chadwick Boseman’s wife Taylor Simone Ledward, my god.

Another added:’Wow. That emotional acceptance speech by Chadwick Boseman’s widow Taylor Simone Ledward at #GoldenGlobes was just incredibly moving and powerful. Glad as I am to see him get all the roses his legacy deserves, I’m a little sad she has to go through this in every acceptance speech.’

Another stated: ‘The absolute strength Chadwick Boseman’s widow Taylor Simone Ledward has demonstrated every single time she’s had to speak on his behalf is truly moving. My heart goes out to her.’