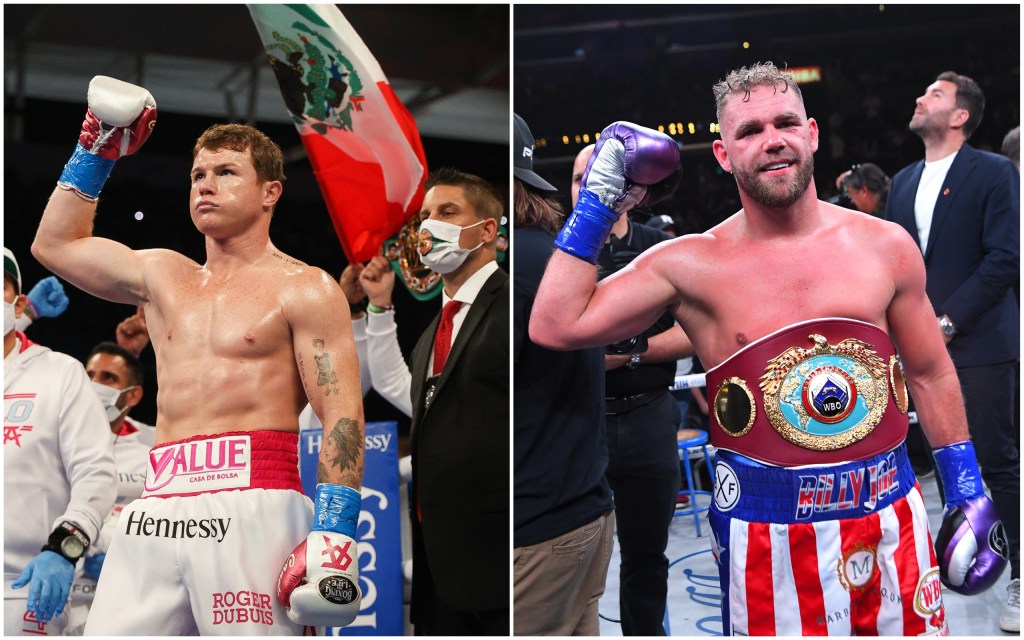 Saul ‘Canelo’ Alvarez and Billy Joe Saunders will finally meet in a huge super-middleweight unification showdown on 8 May.

WBA and WBC champion Canelo swept aside Avni Yildirim in his mandatory title defence on Saturday, dominating the Turkish fighter in a one-sided beatdown that ended at the end of the third round.

Immediately after the contest, his next fight was confirmed with WBO champion Saunders set to take on the pound-for-pound king on Cinco de Mayo weekend, one of the most revered dates on the boxing calendar.

Saunders, undefeated in 30 professional fights, reigned as middleweight champion before moving up in weight class to claim the WBO super-middleweight title in 2019 against Shefat Isufi.

The Briton has made two successful defences of his belt, comfortably outpointing Martin Murray last December.

Promoter Eddie Hearn said of the fight: ‘Last year we missed out on Cinco de Mayo, but this year it’s going to be a very special occasion.

‘He will continue his bid to unify the division, May 8 against Billy Joe Saunders, the WBO world champion who is 30-0.’

Canelo stopped another unbeaten Briton in Callum Smith just two months ago, outclassing the Liverpudlian to take his WBA crown.

Kaisy Khademi: The boxer who fled the Taliban to pursue world title dream

The Mexican superstar is determined to stay active in 2021, sweeping past Yildirim who retired on his stool after three rounds in Miami.

With the Saunders fight now confirmed, he now hopes to further unify the division with IBF champion Caleb Plant likely to be in the sights of whoever comes out on top in May.