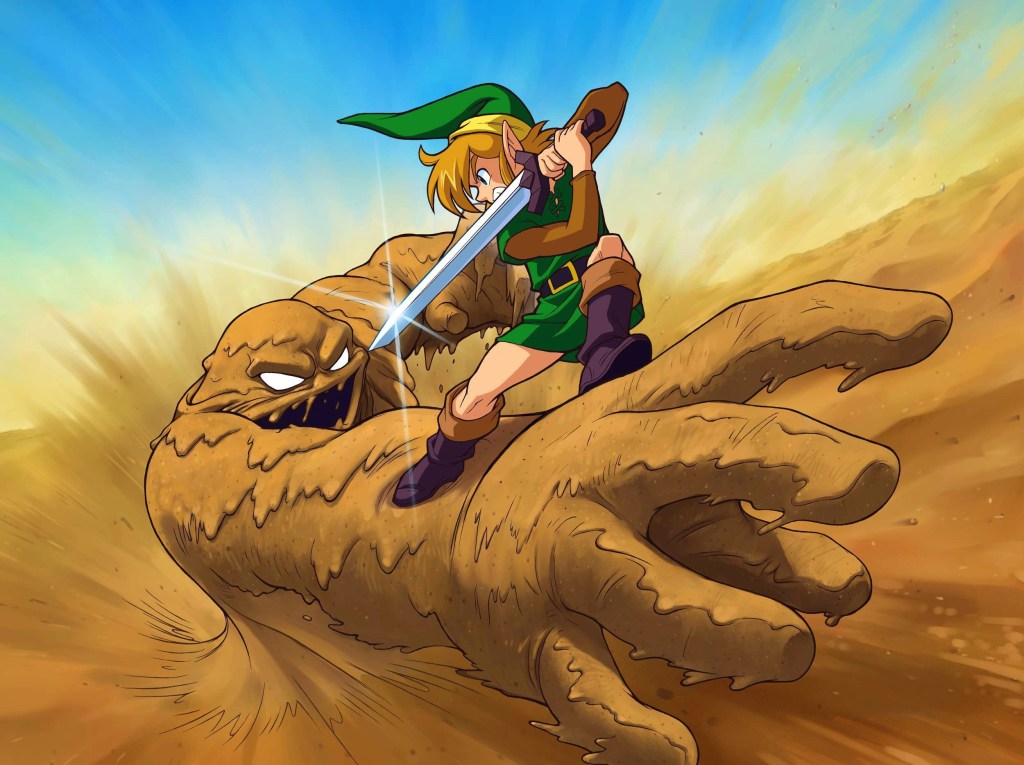 Readers celebrate the 35th anniversary of The Legend Of Zelda, by naming their favourite entries and their hopes for the future.

The subject for this week’s Hot Topic is something Nintendo didn’t mention themselves during the recent Nintendo Direct but which readers certainly had something to say about, as we asked to hear your memories of the series and its games.

Most people hadn’t started with the original NES game but instead reminisced about A Link To the Past, Ocarina Of Time, and the other classics of Nintendo’s iconic franchise.

Start of an affair
The first Zelda title I ever played was the SNES title, A Link To The Past.

It was just after Christmas, I stood in Our Price (remember them?) with gift vouchers in hand, looking at the rack of games wondering which SNES title to pick. Zelda had been well reviewed in Mean Machines magazine and I held it in my hand’ something was putting me off, probably the memory of countless ZX Spectrum arcade adventures, as they called them back then. Whenever I’d played them they were really not great and it was enough to convince me the genre wasn’t for me.

For whatever reason I decided to take a chance and fell in love with the game, it led me to moving onto SNES role-playing games, like the Final Fantasy titles on US import. I think it was the start of my love of games with an involving story over lightning fast arcade action.
Dsb

I am error
Zelda was released the year I was born and I’ve played and completed most of them… except for Link’s Awakening on Game Boy. I got to the last dungeon and couldn’t find a key to unlock a door or something. I remember phoning up the Nintendo helpline and reporting what I thought must be an error.

A helpful American told me that ‘there are no known bugs’. My parents were probably upset with the international call on the phone bill and I was never able to find that key as my little brother ‘accidentally’ deleted my save file.
TommyFatFingers
PS: I didn’t like Breath Of The Wild and having to change weapons every two seconds.

Top three
My first Zelda was A Link To The Past. I bought it on the strength of a great review (probably in Mean Machines) but I really didn’t know if it would be my cup of tea as I was more into arcade fighting games at the time.

As soon as I started playing it I was instantly hooked. When your uncle says don’t go out but you do anyway and then find him in the dungeon, amazing. I know Zelda games aren’t necessarily renowned for their stories but I thought A Link To The Past was great in that respect.
I have played every Zelda game since and enjoyed them all to varying extents.

I think the only one I haven’t finished is Skyward Sword, that’s probably not a reflection on the game itself but just my priorities at the time.

Personal top three, in no particular order, are probably A Link To The Past, Majora’s Mask, and Breath Of The Wild.
John Atkinson

In comparison
First, I must say VLTRFTW.

Zelda is my favourite series and I first fell in love with Ocarina Of Time and I still believe this game to be the best of all time and still holds up as a masterpiece today.

I sometimes despair that people are missing out on Zelda due to it being a platform exclusive and Nintendo wrongly being perceived as being uncool or for kids.

I have seen harsh comments recently from GC and others on how The Wind Waker, Skyward Sword, and Twilight Princess are a bit lacking and time has not been kind on them. They are a victim of their own success, as they are better than the vast majority of games but don’t live up to others in the series.

I would like the Breath Of The Wild sequel to have more extensive dungeons, similar to earlier titles. I thought the divine beasts were too easy, short and boss fights were forgettable.

Zelda’s Awakening
The first Zelda game I played was Link’s Awakening on the Game Boy in the early 90s. As it was the first I thought the character you played was Zelda, until I started playing and realised it was Link! I really enjoyed it at the time, with the overworld and the dungeons and various tools/gadgets you got from each dungeon and the fact you could save your progress.

Most games I had played in the early 90s and 80s did not have an option to save, you just loaded the game up and tried to get from the beginning of the game to the end of the game in one go and they were quite hard. I got stuck really early in the game, at the forest, for ages and as there was no internet to find out the solution I eventually worked it out and got to play the rest of the game.

I did get a guide eventually, from the Game Boy Action magazine, so I could know which characters to trade items in the game to in return for another item. I completed most of the game on my own but got a little bit of help from a friend at school who was playing it too. I didn’t play Zelda: A Link To The Past until I got a Game Boy Advance and although I liked it, Link’s Awakening had been my first Zelda game and Ocarina of Time was my second game, so although I could appreciate A Link To The Past as a good game it was not my favourite.

I absolutely loved the sequel A Link Between Worlds and I also enjoyed the DS game Phantom Hourglass. I got some enjoyment from Spirit Tracks but it was the worst Zelda I have ever played. It was the only Zelda I had to get a friend to defeat the boss for me as there was a rhythm action part to the final boss where you had to play an instrument and I just couldn’t do it.
Andrew J.

Kooky suggestion
My first Zelda game was A Link To The Past on the SNES, although I didn’t get to play it until a few years after release thanks to borrowing it from a neighbour.

As it happens, my parents were going to buy it for me from Comet on release but when they asked for advice from another man buying games for his children there at the time he told them that ‘There wasn’t much replayability in it’ and recommended The Addams Family instead – it wasn’t a bad game per se but I now feel sorry for this man and his kids.
Sven

Games Inbox: Was the new State of Play a disappointment?

Games Inbox: Who is the PlayStation mascot?

First impressions
Zelda is my favourite gaming franchise. Despite owning a NES and SNES, my first Zelda game was Ocarina Of Time on the N64, which is probably my favourite game of all time. Part of that is due to it being my first Zelda; I always think the first one you play in the series often makes the biggest impact.

I can close my eyes and still see the Ocarina of Time intro, I can hear the soft ocarina melody as Link rides Epona around Hyrule Field. Magic!

Post N64, I think Nintendo really struggled with Zelda for a while. The Wind Waker seems to be genuinely adored by the internet these days, but at release I know many were disappointed with it, myself included. This was the true follow-up to Ocarina (in a development sense), the next big step in the Zelda franchise, and it turned out that sailing isn’t anywhere near as fun as riding a horse.

Twilight Princess was Nintendo folding to fan demand for a Zelda that looked like that E3 GameCube demo, not the cartoony The Wind Waker (though The Wind Waker’s graphics are beautiful) and Nintendo should never create something to please fans – they excel at creating experiences that you didn’t know you wanted. At least Skyward Sword saw them trying some new mechanics, though overall it still paled next to Ocarina.

Then came Breath Of The Wild and blew everyone away. I really cannot wait for the sequel. I hope they bring back some dungeons and epic boss battles. I’m predicting some time travel mechanics, or certainly two versions of Hyrule. If I’m being adventurous, perhaps it will feature both Link and Zelda as playable characters – Nintendo seem to be adding second player mechanics to most games.

I’m ashamed to say that I’ve barely touched the portable versions of Zelda. I played Link’s Awakening on Switch and did make a dent on Phantom Hourglass on the DS before I lost interest. So, I’m planning on playing through the Oracle games and Minish Cap this year. I would love to play A Link Between Worlds as well, so might invest in a 3DS at some point.

My ultimate wish? Just let me play Ocarina on my Switch! It’s baffling that I can’t do this but could on the Wii in 2007.
Matt