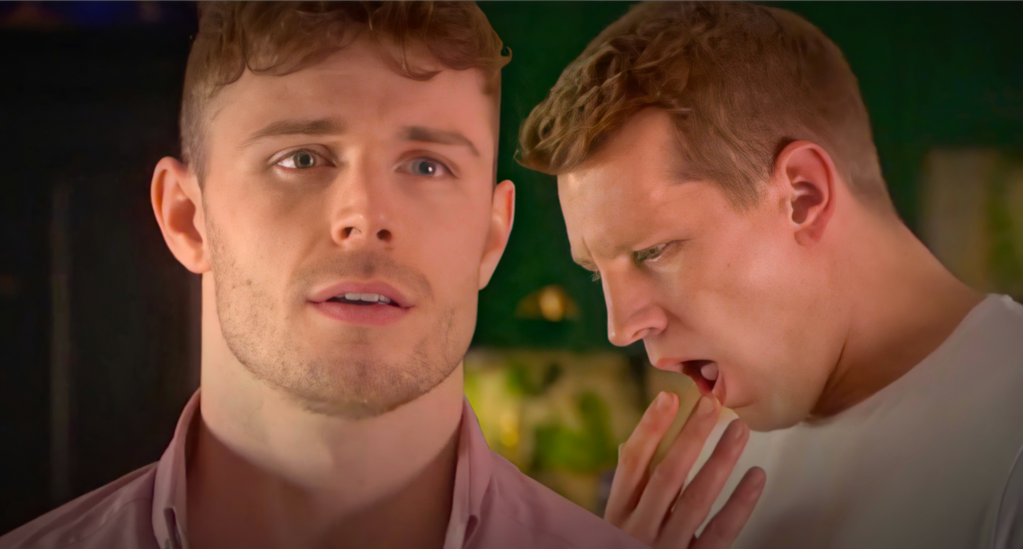 George Kiss (Callum Kerr) sinks to a new low in Hollyoaks, as he turns the tables on boyfriend John Paul McQueen (James Sutton) in a week that could very much change everything.

The policeman has been abusing and controlling John Paul for several months, now, and recent scenes have seen him attempt to stop his beau from applying for a new job.

His methods have involved him encouraging John Paul to neglect his responsibilities under the guise of wanting to spend more time with him.

‘Any time John Paul looks like he’s got something better to do, it really frustrates George, and the way he deals with that is to make John Paul feel bad for doing whatever it is that he’s doing on his own.’

George’s attempts to distract John Paul from his responsibilities backfired somewhat earlier this week when the abuser wound up injured, after colliding with a cupboard door, but — in typical George fashion — he took advantage of the situation in order to punish John Paul.

‘He spots an opportunity to frame John Paul, and make it look like he might’ve done something,’ Callum continued. ‘He doesn’t tell Peri [Lomax] that John Paul has done anything, but he doesn’t make it clear that it was an accident, and this is a good opportunity for him to have some people turn against John Paul.’

One thing leads to another, and in tonight’s edition of the Channel 4 soap, John Paul is arrested in relation to the ‘attack’ on George.

‘He more or less sets it up with Peri in the hospital’, said Callum, discussing John Paul’s arrest. ‘He sees it as an opportunity to make John Paul more dependent on him.’

What happens next remains to be seen, but Callum teases that George will continue to use the situation to his advantage.

‘When John Paul has a suspicion that maybe [George] didn’t act quickly enough in terms of not making it clear enough what happened, he’ll then guilt John Paul and the cycle starts again.’

Goerge proves what he’s capable of in upcoming scenes, that’s for sure, but the question is: will he get worse?

‘Definitely,’ Callum confirmed. ‘I think as people start to see him for what he is, his reaction isn’t to look in the mirror, but to double down.

We’ve got some brilliant but shocking TV coming up, and I can’t wait to watch it. We’ve done some amazing stuff over the last few months and it gets a bit mental!

‘We’ve not finished filming this storyline yet, so this goes on and on, and it’s just brilliant. It takes so many twists and turns, and you’d be daft to miss it!’