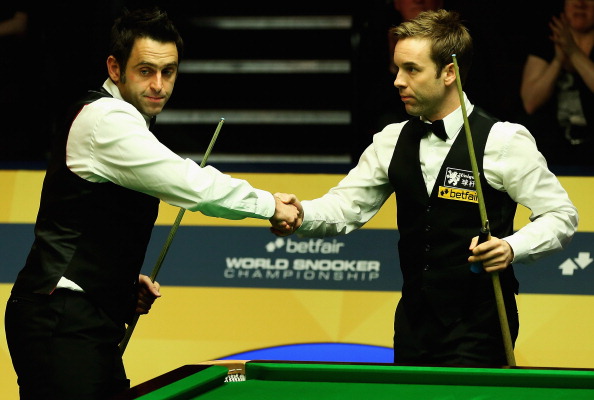 Ali Carter and Ronnie O’Sullivan will renew their old rivalry in the quarter-finals of the Welsh Open on Friday, a friction that has been intensified by a mysterious and disputed apology.

The pair have known each other for decades and long been rivals on the table but their relationship has taken a funny turn in recent years.

The spark, and it was a pretty major spark in the serene world of snooker, came at the 2018 World Championships when the players argued and contact was made in what has been dubbed ‘Bargegate’ but was really the slightest of contact between the players’ shoulders.

It caused quite a stir as Carter beat the Rocket at the Crucible, but the Captain played down the feud a year on, saying Ronnie had apologised and it was all behind them.

‘I spoke to him plenty about it, actually, there’s no hard feelings, it was heat of the moment stuff,’ Carter said after qualifying for the 2019 World Championship. ‘I haven’t been the fondest of Ronnie over the years, but I’ve got the ultimate respect for him as a player and what did give me ultimate respect for him was at the UK Championship, at the hotel when I was having breakfast.

‘This was some months later and he came over to me, he doesn’t need to speak to me, and he came over and said, “Ali, I’d just like to apologise and there’s no hard feelings” and he shook my hand. So I thought to myself “hats off to the man,” and he looked me straight in the eye when he said it and he meant it. It’s all water under the bridge and he’s a good guy.’

This appeared to be the end of things but O’Sullivan brought up the incident in November 2020 and said he in fact did not apologise, but just attempted to put the clash behind him.

‘I didn’t apologise to Ali,’ Ronnie told WST. ‘I just said, “look, let’s move on, let’s not hold any grudges over it.”

‘I still feel that I was in the right, so that apology that they say that I said was definitely not an apology. More like, “let’s just move on, it was what it was and it doesn’t really matter. I’ve got to see you around tournaments, you’ve got to see me, we might as well say hello to each other so let’s just break the ice.”’

Carter has now responded to this claim from O’Sullivan, acknowledging that it is now a straight choice between believing his version of events of Ronnie’s.

The Captain suggests he is the more reliable source of the two because, ‘I generally know what I’m saying on a day-to-day basis.’

‘Well look, whatever makes him happy. I must have imagined it then,’ Carter told Metro.co.uk.

‘It really makes no difference to my life whatsoever whether he apologised or whether he didn’t, I don’t care, whatever makes him happy.

‘But, I’m not going to make it up. Someone’s making it up and it’s either me or him, so take your choice and I generally know what I’m saying on a day-to-day basis. But, maybe I got it wrong? It’s a mystery.’

O’Sullivan was less keen to comment, now seeming keen to put the whole incident in the past again.

‘I don’t really want to get involved in anything like that, to be honest with you,’ he said. ‘Sometimes I’d rather keep my side of the street clean, try and rise above it.

‘As far as I’m concerned it’s history, water under the bridge, try and concentrate on positive things.’

Carter has reached the quarter-finals after two superb wins on Thursday over John Higgins and Mark Allen, while O’Sullivan saw off Martin Gould and Zhou Yuelong.

The atmosphere is likely to be cordial when they play on Friday in Newport, but you can never be entirely sure when these two meet.

Ali, for one, is excited to take on his old foe again, saying: ‘It should be a good game, I’m looking forward to playing him.

‘Look, if I’m playing Ronnie in the quarter-finals then I’m in the right place.’