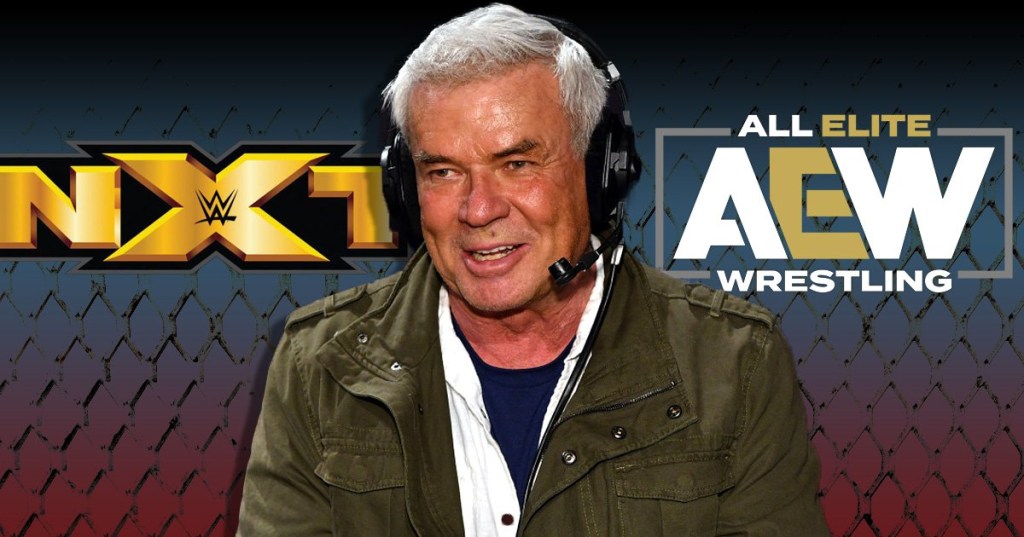 WCW legend Eric Bischoff was in the trenches for the infamous Monday Night Wars – but he doesn’t get the same feeling from AEW and NXT.

The wrestling mastermind has decades of experience in the business and even saw his promotion defeat WWE for 83 weeks in a row in their ratings battle, and it’s perhaps no surprise fans got nostalgic when the modern day equivalent emerged.

However, with neither WWE’s NXT show nor AEW Dynamite topping one million viewers on a weekly basis – and the former effectively being a developmental brand – Bischoff doesn’t get the same feeling.

Speaking exclusively to Metro.co.uk, he smiled: ‘I chuckle to myself. I understand why they’re making the comparison, but it’s not the same at all.’

He suggested the so-called Wednesday Night Wars were drawn up by the wrestling media and podcasters, rather than a legitimate rivalry.

‘The dirt sheet writers and people who like to report on ratings, they like to position it that way, but I don’t think the audience necessarily feel that way.’

Bischoff is well placed to comment on the modern wrestling landscape, having worked behind the scenes for WWE on the SmackDown brand in 2019, as well as making an appearance for AEW last year and having history with IMPACT Wrestling, albeit during its rollercoaster TNA days.

The latter two promotions have shown a real willingness to collaborate, with New Japan Pro Wrestling getting involved since Eric spoke to us.

However, even as the companies’ relationship was getting started he was excited to see how it panned out.

‘I think time will tell, right,’ he pondered. ‘I think theoretically, of course – when you have two companies working together you have twice the amount of talent that you can develop stories with.

‘You have many more creative options, you have the marketing optics to create an “us versus them” scenario – all those things are great elements to have.’

He also saw the move as something that could benefit both brands, despite AEW holding a greater audience.

‘Theoretically, both companies could certainly benefit from it. Particularly IMPACT, because IMPACT is getting more visibility now than they ever have,’ he pointed out.

‘AEW can certainly benefit because, again, more talent, interesting proposition with two companies working with each other – or against each other, as the case may be.’

Bischoff was quick to dismiss the idea that such a collaboration was something WWE aren’t interest in, as he pointed to arrangements with brands like PROGRESS Wrestling, wXw and Evolve, as well as superstars like Daniel Bryan, Cesaro and Seth Rollins coming from the independent scene.

‘WWE is interested in the independent wrestling territory,’ he said, while executive Triple H has made it clear the company is ‘open for business’.

Eric added: ‘They have a lot of independent wrestling content on their network, and a lot of their talent comes from the independent scene around the world in some cases.

‘There’s a sincere interest on WWE’s part in finding opportunities that lie within the independent wrestling scene and if they can make something happen where both the independent promoter benefits, the talent in that promotion benefits, and WWE somehow benefits – then yeah, absolutely that’ll work.’