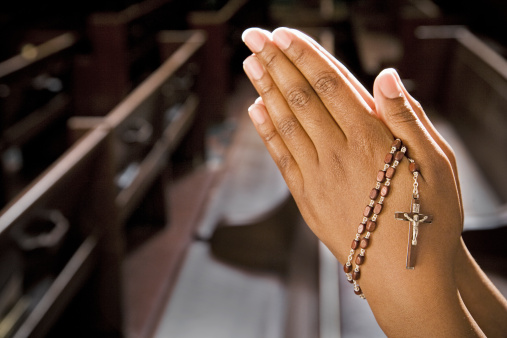 After the fun and frivolity of Pancake Day (or Shrove Tuesday), comes the hard work for many Christians.

Lent is the period of six weeks (40 days not including Sundays) leading up to Easter, the most important festival in the Christian calendar which celebrates and honours the sacrifice, and resurrection, of Christ.

During Lent, Christians will reflect on sin, sacrifice and more to honour the 40 days spent by Christ in the desert, where he begun his work sacrificing himself for humankind, and resisted temptation from Satan several times.

Because of this, many things are often prohibited, and Christians are asked to make sacrifices of their own.

But what does this include? Can you still get married during Lent? We look at this and other traditions…

Can you get married during Lent?

The general understanding in modern days is yes, you can marry during Lent, but it’s always best to check with your church or priest overseeing the ceremony beforehand.

Some might have restrictions on when they are available due to the busy nature of the season, with Easter services and more happening.

Traditionally, many churches would outright ban large ceremonies and weddings taking place during Lent as it went against the solemn nature of the Season of Lent – the religious purpose of Lent is the preparation of the believer for Easter through prayer, doing penance, mortifying the flesh (abstinence or fasting) and repentance of sins.

The other issue with getting married during Lent is churches may restrict how you decorate the venue for your big day.

So, even if they grant you permission, you might be prohibited from decorating with colourful flowers or other joyful, bright touches.

Lent aside, big weddings are strictly off the cards at the moment anyway, due to the ongoing coronavirus restrictions.

Can you eat shrimp during Lent?

You can tuck into a bit of seafood during Lent, however, you are not allowed to eat meat or poultry on Ash Wednesday or any Friday during Lent.

This is because, during Biblical times, fish and seafood was cheap and not considered a luxury.

Christians will give up luxury goods to honour the sacrifices made by Jesus Christ, and to appreciate the horrors that he endured in the 40 days spent in the desert – known as The Temptation of Christ.

Some also suggest Fish Fridays – the colloquialism given to eating seafood on Fridays during Lent – came about because you commit to abstaining from eating the flesh of warm-blooded animals—since the thinking goes, Jesus was a warm-blooded animal.

Lent traditions from around the world

Lent is celebrated by believers of Christ the world over, and how they celebrate can vary from country to country.

For example, in Croatia, on Ash Wednesday, a human-size wooden doll called a Fašnik symbolising all immoral and mischievous conduct of the past year is burned.

On Good Friday, Hungarian members of the Reformed Church wear mourning clothes that are either black or white, depending on the region.

Mothers bring their small children to a church service for the first time and touch their babies’ heads against the wall of the church so that they begin to talk sooner.

Meanwhile, restaurants in many Orthodox countries will serve a special menu through the duration of Lent, removing meat and fish from their menus. Cookies and cakes may be permitted, but will often be baked without butter.


MORE : What is Ash Wednesday and what’s the meaning of the day?


MORE : Priests told to just drink all the wine themselves as communion returns