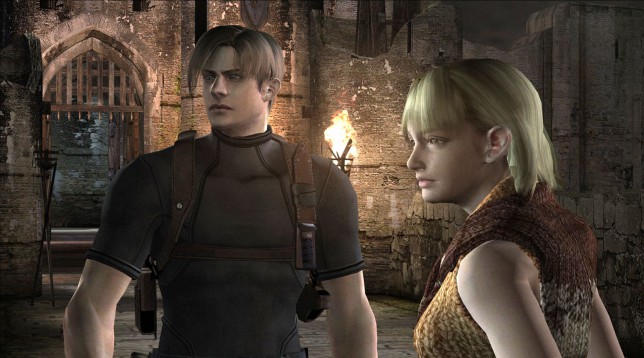 A reader laments the lack of great love stories in video games and argues that Leon S. Kennedy and Ada is as good as it’s ever got.

Ah, sweet l’amore! That most bastardised of Catholic holidays with its crass, American commercialism is upon us once more: Valentine’s Day.

Glorified in cartoons and sitcoms as long as Unicron’s arm, it is something that most people – even those who are already in a relationship – don’t give a flying moogle about. But, as many do, let’s use the occasion as a flimsy excuse to get all… romantic.

I’m sure we can all name those great romances that have appeared in gaming over the years. Like, uh… oh, now let me see… hmm. There’s plenty of shipping fuel out there for you: Mario and Peach, Sonic and Amy, and the many doomed tragedies that litter the Final Fantasy series. That said, in the original game, Cloud and Aerith don’t even so much as kiss. No such luck for Tifa, either. Oh, that ship is called ‘Cloti’ by the by. I had to learn that so now so do you. Does that mean Cloud and Aerith is ‘Cloth’? Eww.

That said, as a narrative device, romance isn’t really all that interesting. Not by itself at least. You have to be really invested in both characters and enjoy their interactions together. Which means that the most interesting part of a romance – to any outside observer – is the chase. Humour helps, too. Not that 9 out of 10 romcoms seem to understand that and can barely raise a smile, never mind anything else. For the record, the greatest romantic comedy ever made is Groundhog Day. Yes, it is a romcom. It follows the formula almost to a tee.

As for games, I rarely feel that two people love one another. Oh sure, you have BioWare and their multiple partners, but whether it’s Shepard or the Inquisitor it’s always kind of undercooked. Because the player character still has to be a vessel for who and what the player wants to be. They have their moments; like wanting to have little, blue babies with Liara or choosing your favourite place to shoot empty bottles with Garrus on the Citadel. I don’t get how so many girls can love Thane, he’s so deathly dull. So deathly dull that he’s dying from it! Ha ha.

A similar amount of detachment can be felt in the Persona series. It just comes down to whoever you think the best girl is. Chihiro, Chie, and Makoto – in case you needed any help.

The romances in games that have affected me most, at the emotional level, have been Adell and Rozalin from Disgaea 2 and Leon S. Kennedy and Ada Wong from Resident Evil 4. Adell and Rozalin’s relationship is integral to the story, making for the best ending the series has had thus far. But it’s actually Resident Evil 4 I really want to discuss.

Usually, at best, the characters of the Resident Evil series can be very interchangeable – sometimes flattered by a great performance like Alyson Court as Claire Redfield for Code: Veronica. While Claire may have got the best quips in the Resident Evil 2 remake she could just as easily been anyone. Hell, it could have been Iron Man and the character would be barely changed. But Resi 4 is different.

This is peak Resident Evil storytelling. Enough cheese for all your burger and crackers needs, but also some truly great lines. Such as ‘Faith and money will get you nowhere, Saddler!’ What? Doesn’t Leon come from America? Where televangelists can have billions? They also make Los Illuminados look like choir boys but that’s just my humble opinion…

Then, when Leon accuses Salazar or terrorism he replies ‘My, isn’t that a popular word these days?’ which I thought was very well observed and quite funny. Resident Evil 4 came out in the closing years of the second Bush administration after all.

As for our star-crossed lovers, they perform the dance of sassy femme fatale and stoic hero all very well. Ada doing just enough to show she cares, but not too much. She saves his life three times at least before the finale but also kicks him in the crotch, stabs him, and leaves him on a speedboat that’s about to crash into some rocks.

Now, she does get herself captured by Saddler for the game’s climax, but gaming’s greatest femme fatale is no mere damsel in distress. Just like she did back in Resident Evil 2, she throws down a very fancy rocket launcher that Leon can end the fight with, blowing Saddler up into very tiny bits. She takes the credit for it as well this time. Also, do you remember how hard PlayStation 1 Leon took Ada’s ‘death’? The poor boy was so devastated! I was a little disappointed that he was so understated in the remake. Couldn’t he have cried at least?

Anyway, back to the matter at hand. I love that there is no confirmation of their relationship at the end of the game, even though they clearly love one another. No long kiss, no declarations of the heart. She steals a sample of Las Plagas from him (because of course she does, she’s a mercenary and she has a job to do), at gunpoint by the way, and takes off in a helicopter. Don’t worry, she gives him the keys to a jet-ski. With a little teddy bear key tag. Adorable.

Then we come to what Leon says at the end, after Ashley asks who Ada was. And this is my favourite line of dialogue of all time in a video game: ‘She’s like a part of me I can’t let go. Let’s just leave it at that.’ Wow, I actually felt his pain. It’s poetry, it’s worthy of Casablanca it’s so good. Oh, you poor, lovelorn idiot.

I want them to be together so badly! And that is because Resident Evil 4, with its goofy humour and occasionally brilliant dialogue, made me care about Leon and Ada. They’ve never got me to care that much about anybody else! Not even Claire and Steve! Let’s face it, she was never going to go out with him anyway.

It’s just a shame Resi 4 spoiled it slightly, that Leon asked Hunnigan out on a date after the credits had rolled. But hey! That’s Resident Evil for you! You can’t have your steak without also a lot of cheese.


MORE : Resident Evil 4 remake has been rebooted by Capcom