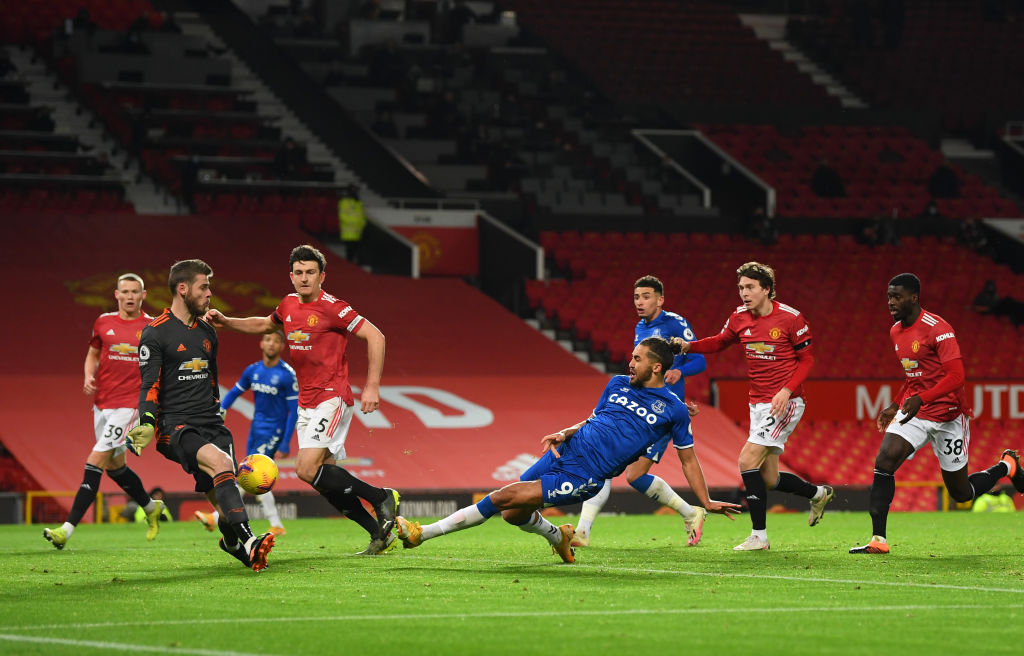 Paul Scholes says Manchester United drawing 3-3 at home to Everton is another ‘big blow’ to their hopes of securing the Premier League title and believes Paul Pogba being forced off with a thigh injury was a pivotal moment in the match.

Edinson Cavani and Bruno Fernandes found the net either side of Pogba’s substitution in the 39th minute, with the Red Devils dominating possession and chances and seemingly cruising at Old Trafford.

Abdoulaye Doucoure and James Rodriguez dragged the Toffees back into the game with a pair of quickfire goals before Scott McTominay restored United’s advantage and looked to have won it with a smart header in the 70th minute.

But the momentum swung again in the dying moments and Dominic Calvert-Lewin was in the right place at the right time to squeeze the ball past a shaky David de Gea and rescue a point for Everton.

It means United have won just one of their last four games in the Premier League – their record-equalling demolition job on Southampton – and their title credentials have come under intense scrutiny as a consequence.

‘That’s a big blow. If you’re talking about title hopes, it’s a big blow for them. Of course it is,’ Scholes told Premier League Productions.

‘I just feel Paul Pogba going off was a big moment in the game. I thought they had complete control up to that point.

‘Fred coming on, they lost control in the middle of the pitch. [Andre] Gomes, Doucoure and [Tom] Davies really started to take control of the game and that was a big blow for United.

‘Conceding a goal that late, it’s not a good look. Are they totally out of it? It’s going to be difficult from now on I think.

The legendary ex-United midfielder added: ‘There was a lot of [positive] stuff in the game, of course there was, to get in the position they were in but they’ll be very disappointed.

‘And again it’s at home, dropping big games at home. I think they’ll get to the end of the season and think “what if?” because it’s so many stupid points they’ve dropped at home.

‘They’ve lost four games at home, now these stupid points they’ve dropped, Sheffield United last week, Tottenham, Crystal Palace, losing to an Arsenal team who are nowhere near the team they were.

The result leaves United two points adrift of league leaders Manchester City, who have a game in hand on their rivals.

Solskjaer’s men will look to send a message to those around them with victory over fifth-placed West Ham on Tuesday night.

However, the United head coach was quick to play down their title hopes after their setback at home to Everton.

Asked whether United are still slightly short when it comes to winning the title, Solskjaer told Sky Sports: ‘We’re not talking about winning titles!

‘We’ve come a long way with this team and we shouldn’t even be considered as title chasers so that’s one for you.

‘We’ve got to be better as a team and then see where we end up. ‘Going forward we were very good but we need to stop conceding easy goals.’