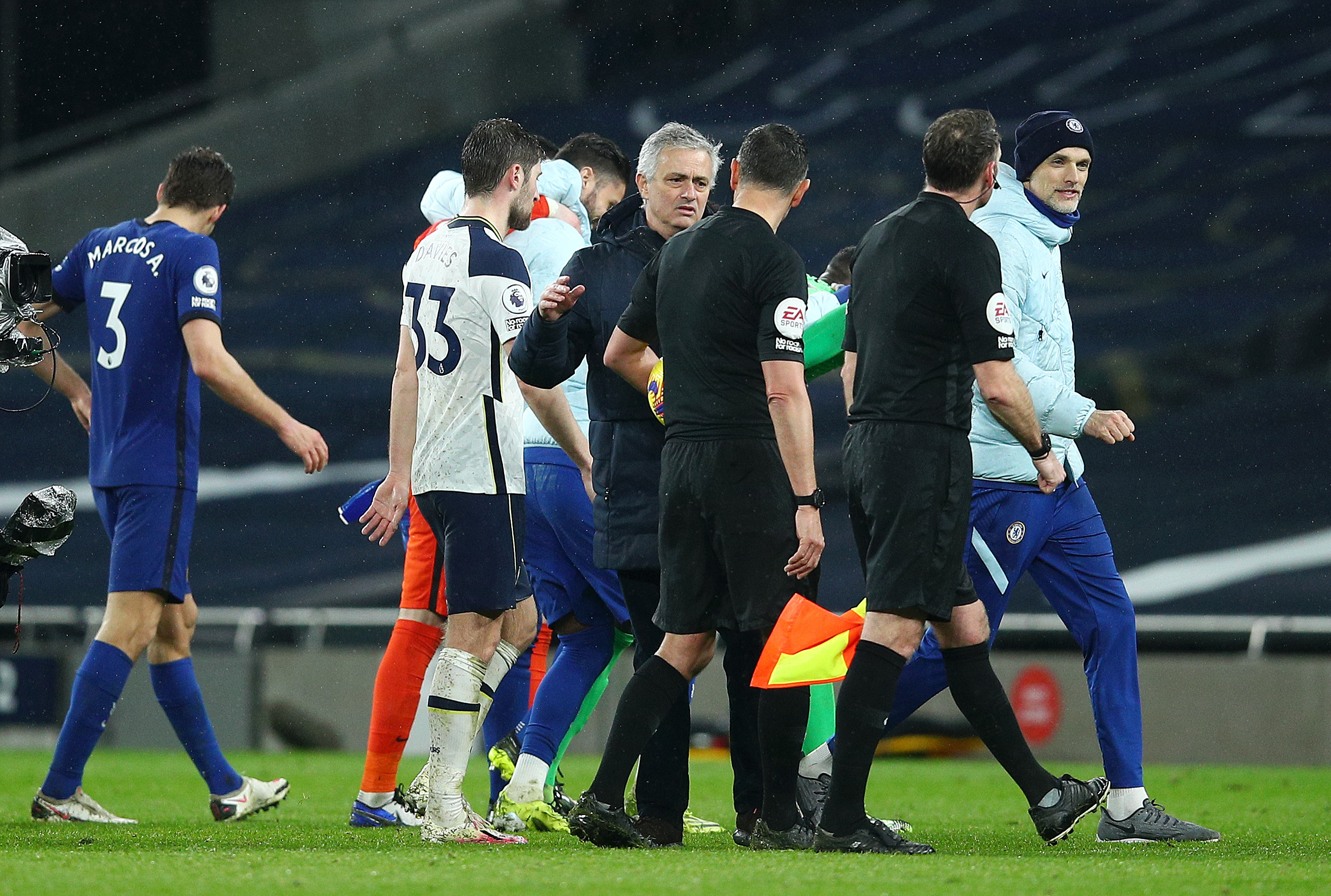 Jose Mourinho says he told Andre Marriner he was ‘one of the best referees in the Premier League’ after Tottenham’s 1-0 defeat to Chelsea but that he was not impressed with his performance in the London derby.

Jorginho converted from the penalty spot after Eric Dier’s clumsy challenge on Timo Werner in the 24th minute and the visitors held on for victory to ensure Thomas Tuchel remained unbeaten since taking over the reins from Frank Lampard.

Spurs, missing their talisman Harry Kane, looked blunt in attack at the Tottenham Hotspur Stadium but had three late chances to draw level which were spurned by Carlos Vinicius, Eric Dier and Son Heung-min.

The defeat was Tottenham’s third on the bounce in the Premier League and ended Mourinho’s record of never having lost back-to-back home matches as a manager in the top flight.

And while there were seemingly few contentious moments across the 90 minutes, a frustrated Mourinho approached referee Marriner at the full-time whistle to make his feelings known about the officiating on show.

‘I told him something that he knows already which is that I consider him one of the best referees in the Premier League and I care for him,’ the Portuguese explained at his post-match press conference.

‘He’s a referee that I have a big admiration [for] and that gives me probably a good position to tell him that I didn’t like his performance so it was basically like that.

I have a very good relationship with Andre so that gives me a good position to tell him that I didn’t like the performance.’

Tuchel was understandably pleased to get a second win under his belt as Chelsea boss but admitted there was plenty of room for improvement, with his players lacking a ‘killer instinct’ in the game.

‘Every experience we make is a step forward if we are opening to learning from it,’ the German told BT Sport shortly after the final whistle.

‘The whole first half we totally controlled the game, very high up the pitch. Maybe we lost confidence in the second half because we lost the ball possession. We never lost the belief or structure. If it is necessary to suffer, you have to suffer.

‘A bit more killer instinct and more aggressive in the box, it would have been nice to decide and there were chances we lacked a bit of determination in the box.

‘It was a big win in an away game and I am very happy.’

Hospital under lockdown after ‘serious incident’ in Kilmarnock in Scotland

Tuchel added: ‘It is not only about tactics, about how we play and live it.

‘They lived it 100 per cent with full power and intensity.

‘We never lost the belief, faith or courage to push high and for that you have to be brave and we were and the winners in the end.’


MORE : Mason Mount reveals what he said to Thomas Tuchel at half-time in Chelsea’s win over Tottenham