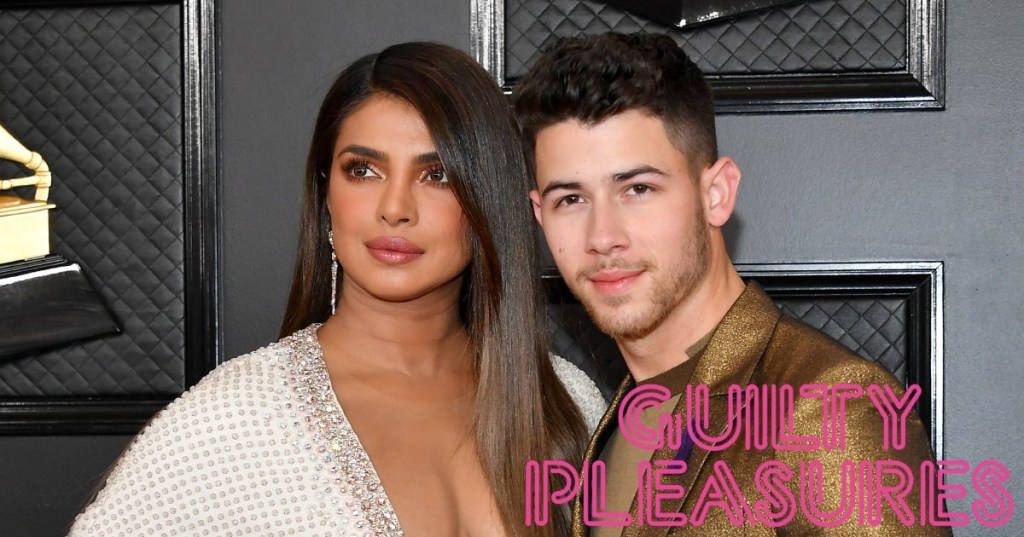 Priyanka Chopra says there is nothing pants about her life with US pop hunk Nick Jonas.

In fact, less is more not only in her outfits — as demonstrated in these shots for Elle — but also in her marriage.

‘We see each other every three weeks,’ said the Bollywood actress turned Hollywood star, who married the Jonas Brother in 2018.

‘Wherever we are in the world, we fly to each other at least once a month for a couple of days. It was our rule when we first got married. Otherwise, we’d never see each other.’

Priyanka had said ‘yes’ to Nick after only two months of dating. This week he declared he wanted ‘many’ kids with the Baywatch beauty, who at 38 is a decade older.

‘I didn’t expect the proposal at that point… it was two months!’ she admitted. ‘I thought it would happen but it was still a complete shock. I relinquished control and just went with it.’

Even more surprising is that she had sworn off men. Priyanka explained: ‘We were just sporadically meeting for about two years. We were texting and stuff, and there may have been a part of me that wanted something serious.

‘But I was taking a hiatus from guys at that point. I didn’t want anyone romantically.

‘But there’s always been something about Nick, which is why we always ended up staying in touch, no matter where we were.’

See the March issue of Elle, out tomorrow.

It’s not Ora over with Rita, insists Gavras

Rita Ora will not be sexy, single and free to mingle when she is sprung from Australian quarantine — because her boyfriend insists they are still together.

Reet and French filmmaker Romain Gavras have not been seen together since her notorious 30th birthday bash in Notting Hill in November.

It had been claimed the backlash she received for her illegal lockdown celebrations — including authorities dubbing her ‘selfish’ — had put a strain on her romance with Gavras, 39.

But yesterday he dismissed the speculation, telling Mail Online reporters in London they were ‘very close’ and insisted ‘we are together.’ After touching down in Oz this week to film The Voice, Rita was escorted by armed guard to a luxury hotel quarantine facility in Sydney, where she will be confined to her room for 14 days.

But once she is out, Australia is largely free of Covid restrictions, meaning the party animal can enjoy normal life in the sun.

Hammer’s career was blown out of the water after explicit messages he apparently sent to women were leaked online.

Now Chambers, 38, who split from the 34-year-old last summer, appears to have addressed the claims in an Instagram post. She said she supported any victim of assault or abuse and urged those who had suffered to seek help. Hammer has previously blasted the ‘vicious’ allegations.

Saved By The Bell star Dustin Diamond was ‘too afraid’ to be seen at a hospital to have a lump in his neck checked out.

The star, who played Screech in the high school sitcom, died on Monday aged 44 — only three weeks after the lump was diagnosed as cancer.

‘He was afraid of the public attention if he went into the hospital,’ Diamond’s manager Roger Paul told People magazine.

‘But finally, his girlfriend took him and the doctors confirmed it was cancer. Dustin tried to be as positive as he could — that’s who he was — but he was scared… he didn’t want to die.’

Maya Jama is urging fans not to skip their smear tests following a health scare of her own.

The TV presenter is encouraging women to have their cervix checked for cancerous cells after she delayed her test for a year.

‘It’s very rare I get serious, but I don’t see it talked about enough,’ Maya, 26, said on her Instagram story. She explained she had just returned from a visit to her doctor, where she had cells removed and sent for further tests.

‘Girls, go and get your smear test,’ she added.

‘I know it seems butters and uncomfortable and awkward but it’s not that bad and it’s so important.’

Kylie Minogue smashed records with her lockdown album Disco… and has teased there’s more on the way.

The Aussie singer, 52, is back in her home city of Melbourne for a restriction-free life — but she can’t stop Spinning Around in the studio. She explained she ‘craves stillness every now and then… but after three days I am ready to go.’

Chuffed to be the first woman ever to have a No.1 album across five decades, Kylie is desperate for the green light to get back on stage. ‘Say the word and I am there,’ she said.

Joss’s girl is no shrinking Violet…

Joss Stone found a novel way to announce she has given birth to a baby girl.

Speaking on one of her Cooking With Joss videos on her Facebook page, 33-year-old Joss said: ‘I’ve a very special little bun that I’ve been making for… oh, took about nine months, and it’s cooked! It’s ready! So here’s one we made earlier.’

Her partner Cody DaLuz then appeared on the screen with the baby and Joss said: ‘She’s so sweet! This is Violet Melissa. She’s just fed and she’s eating her hands because that’s her little vibe.’

MORE : Sinead O’Connor asks fans to pray for her son Shane, 16, after ‘hideous day from hell’