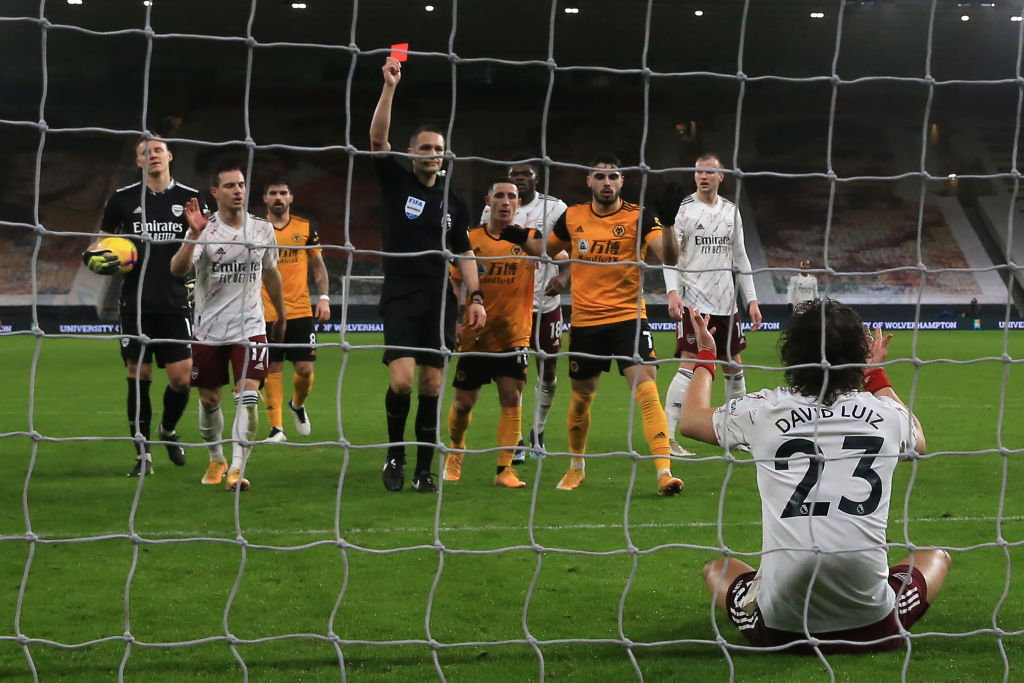 A frustrated Ian Wright has hit out at referee Craig Pawson’s ‘ridiculous’ decision to send David Luiz off in Arsenal’s 2-1 defeat to Wolves and insists the defender should have remained on the pitch despite his foul on Willian Jose.

The Gunners started brightly at Molineux and took the lead thanks to Nicolas Pepe’s sublime solo effort in the 32nd minute but Luiz was adjudged to have fouled Willian Jose inside the box right on the stroke of half-time and the red card turned Tuesday’s Premier League match on its head.

Ruben Neves equalised with the resulting penalty and Joao Moutinho fired in an unstoppable strike from 30 yards to give Wolves the lead before Bernd Leno became the second Arsenal player to be given his marching orders for handling the ball outside his area.

Nuno Espirito Santo’s side kept hold of their narrow advantage to win for the first time since mid-December, while Arsenal must quickly lick their wounds ahead of their trip to ninth-placed Aston Villa this weekend, who sit just one point above them in the table.

On Luiz’s sending off, legendary ex-Arsenal striker Wright told Premier League Productions: ‘The way he’s supposedly meant to have challenged him and stopped a goalscoring opportunity when he’s round the back of him, I just can’t understand that one.

‘Maybe it’s because I’m an Arsenal man but it’s very tough to take, especially how we started.

‘We started the game so well. It was a brilliant start for Arsenal. I thought this was one of those where if they could have taken a couple of those chances early on – they hit the post and hit the bar – it could have been a romp.

‘But David Luiz on the halfway line, he goes in and gets caught out coming back.

‘He clips him on the back, it just really seems so harsh for him to get a sending off. It’s very hard to take for Arsenal fans.’

Wright admitted he had no problem with the decision to award Wolves their penalty but criticised referee Pawson for brandishing a red card and ‘punishing’ what he felt was a ‘total accident’ from Luiz.

‘I’ve got so much sympathy because whether it’s intentional or not, that seems like a very harsh red card,’ Wright added.

‘The penalty is fine, I haven’t got a problem with that because he’s been impeded but it wasn’t intentional so why does he need to be sent off for that? It’s double jeopardy and he’s being punished for something that’s a total accident.’

Wright had less complaints when it came to Leno’s red card which he said was an ‘obvious’ sending off.

‘I don’t know what he’s doing there, he’s got himself in all sorts of problems. You can see it on his face there,’ the former England attacker continued.

‘He’s come out, he’s mistimed it, it’s skidded off the surface and it’s an obvious red card.’