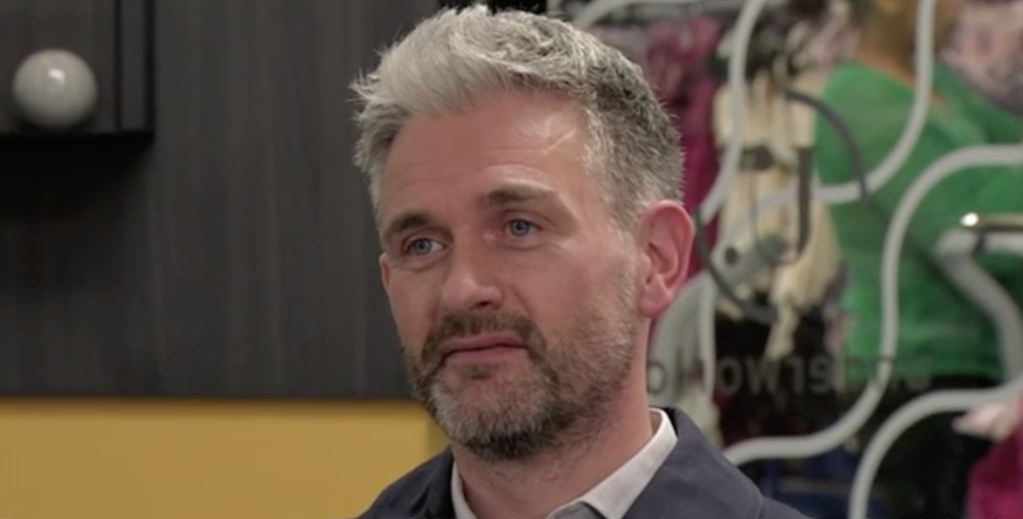 Lucas Kempton (Glen Wallace) was left saddened in Coronation Street as Carla Connor (Alison King) chose Peter Barlow (Chris Gascoyne) over him, but he’s not giving up on love just yet, as he will return to win her affection.

Carla was left in shock during last night’s (January 29) edition of the ITV soap, as she came face-to-face with former flame Lucas.

The businessman had arrived in Weatherfield to do business with Underworld, but it was clear that business wasn’t all he had on his mind.

‘I think it’s a super way to be introduced as a character coming in,’ actor Glen Wallace told Metro.co.uk, ‘and to such a well established couple!’

The chemistry between Carla and Lucas was certainly apparent, that’s for sure, and it soon came to light that the two knew one another quite well.

‘There is a backstory, an established relationship between Lucas and Carla,’ Glen said.’It was around the time she’d married Nick and disappeared off to Devon. Lucas is a businessman who’s based in Devon, and they met on a night out.

‘I think Lucas would probably look upon it as though they’re twin flames. A soulmate — someone who he’s had an instant connection with.’

‘It has to have been more than just a moment [between them]. I think he can see a future with Carla.’

The connection between the two was certainly on display during the episode in question, as Lucas treated Carla to lunch at the bistro, where they reminisced about days gone by.

However, it soon came to light that Lucas had suffered a great tragedy, as girlfriend Lucy — who Carla knew of — died of a drugs overdose.

‘There’s parallels between Carla’s relationship with Peter, and Lucas’ with Lucy,’ the actor continued. ‘He’s gone through that relationship being that caring partner, and looking after someone who is addicted to something.’

Carla noticed the similarities for herself, and it was ultimately these similarities that made her think about whether or not she should just give up on Peter and take Lucas up on his offer to spend the night with him in a hotel room.

‘He’s talking about it from a place of experience,’ Glen added, ‘what he’s doing is taking to Carla and saying: “Look, I’ve been there. I know what it’s like. I can help you through it. I can recognise the signs. I don’t want you to do what I did.’

In spite of Lucas’ pleas, however, Carla ultimately declined his offer, and thus stayed with Peter. However, their happiness could be short-lived, as — in spite of Carla’s choice — Lucas returns in upcoming scenes.

‘I think he’s giving her a little bit of space,’ Glen teased. ‘I think it’s dented his ego that she didn’t come, but I think it’s given him the time to go: “No, hold on a second. I’m not going to let this go.

‘I think Lucas has the capacity to ask Carla the questions about herself and about relationships that maybe she hasn’t been asked before. He’s going: “I’m a clean slate. I want this to work, and for this to work we have to be open an honest with each other.”

While Lucas will return in a seemingly recurring capacity, could he become something of a cobbles mainstay?

Glen, who’s had significant roles in both Hollyoaks and EastEnders, reckons so!

And what about Peter?

Glen smiled: ‘I think Lucas has the capacity to maybe get under Peter’s skin a little bit!’