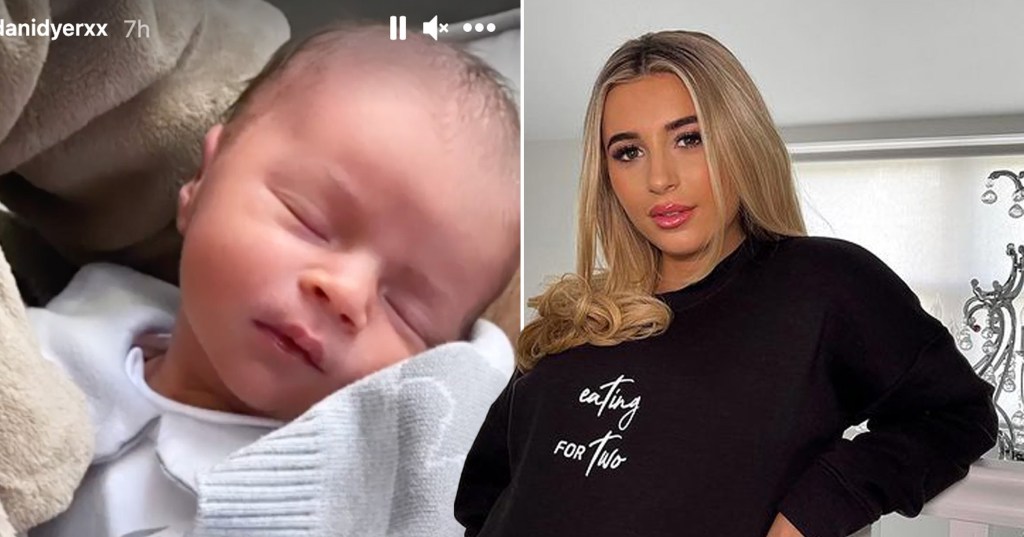 Dani Dyer has shared a sweet new snap of her newborn son just days after she gave birth.

The Love Island star welcomed her first child with boyfriend Sammy Kimmence last weekend, and has now given fans an update after a long labour.

Taking to her Instagram Story, Dani posted the adorable photo of her cradling the baby boy in her arms while he was fast asleep, with a grey jumper covering him to keep him warm.

Dani wrote: ‘Thankyou all so so much for the amazing messages and kind words I could stare at this little face all day long xx. [sic]’

The 24-year-old had previously confirmed the birth of her son by sharing another image of herself holding him in her arms from her hospital bed.

She also shared another snap of boyfriend Sammy leaning down and planting a kiss on the baby’s cheek.

‘We are in a complete baby bubble and enjoying every moment, can not believe he is ours, completey inlove and so grateful to be his mummy…

‘Sending all my love to all the other mommas to be out there in lockdown… the best experience ever will never forget this day. [sic]’

Dani, who won Love Island with ex Jack Finchman in 2018, announced her baby news last July, sharing pictures of her and Sammy holding up their baby scan.

She wrote: ‘Little bubba can’t believe you are going to be ours.

‘Me and Sammy are so excited to start this next chapter in our lives, feel so lucky and grateful… 2021.’

The reality star previously opened up about finding the first stages of pregnancy tough as she battled carb cravings.

She explained: ‘Apparently at this stage I’m supposed to feel ‘on top of the world’ which I really hope for as the first few months have been really hard.

‘I’ve had loads of messages from people so I thought I’d share my experience so far.

‘I’ve been lucky with not being physically sick. But I’ve [definitely] suffered with the nausea, always being tired but waking up at stupid times and horrendous migraines (I will definitely be trying out all the new things people have recommended me so Thankyou).’


MORE : Britain’s Got Talent faces axe in 2021 due to coronavirus