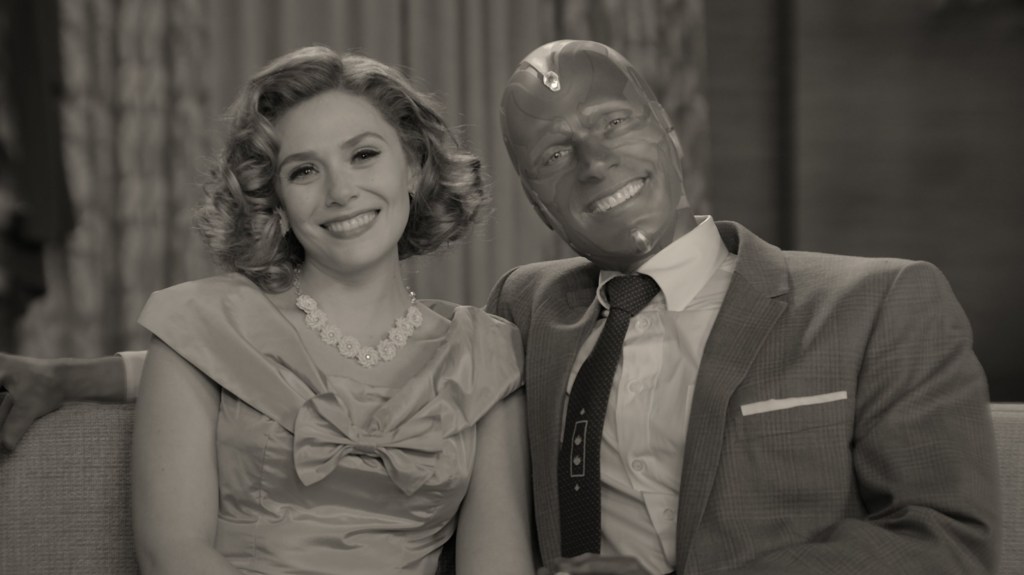 Warning: spoilers ahead for episode one of WandaVision.

The head writer and creator of WandaVision has reminisced on the ‘dark, bleak moment’ she experienced while struggling to bring the first episode of the Marvel TV series to life on paper.

Three episodes of WandaVision have been released so far, introducing viewers to a peculiar world in which Wanda Maximoff (Elizabeth Olsen) and Vision (Paul Bettany) are living in a neighbourhood inspired by retro American sitcoms.

In the season premiere, the superpowered couple welcome Vision’s boss Mr Hart (Fred Melamed) and his wife Mrs Hart (Debra Jo Rupp) to their 1950s-style home for dinner, the drama unfolding in black and white on screen.

Their meal is disrupted when Mr Hart starts choking on his food, with Mrs Hart, Wanda and Vision’s reactions hinting that there is something deeply troubling going on behind the scenes.

When the show’s creator Jac Schaeffer first tried tackling the pilot on her own, she wasn’t sure she could capture it in quite the right way.

‘It was a dark, bleak moment,’ she said while speaking on The Hollywood Reporter’s TV’s Top 5 podcast.

While facing the prospect of penning the chilling dinner party scene by herself, Jac decided to ask for assistance from several of the programme’s other writers.

‘The first day I sort of floundered and realised I didn’t have the goods to do it,’ she recalled.

‘Then I called in three of the writers and was like, “Clearly I’m missing basically the whole Hart’s dinner and the confusion”.’

Jac credits the other writers with ‘saving’ her after they put forward several ideas, their joint efforts resulting in the gripping series premiere that set Phase Four of the Marvel Cinematic Universe into motion.

During a recent interview, A Knight’s Tale actor Paul revealed that a scene was cut from the 2019 blockbuster Avengers: Endgame that would have revealed a massive clue about Vision leading up to WandaVision.

In the 2018 film Avengers: Infinity War, Vision is killed by Thanos (Josh Brolin) as the villain pulls the Mind Stone out of the android’s head.

However, there was originally going to be a moment in the sequel when Wanda ‘opened a body bag drawer’ to discover Vision’s body.

Chris Hemsworth and Chris Pratt hang out with Thor: Love and Thunder cast ahead of filming

‘Kevin kind of talked to me and said, “I just – I’ve got to pull the shot.” And I was like, “Ugh!’ Because I really wanted that profit participation!”’ Paul said while taking part in an IMDb interview with his co-star Elizabeth.

That scene could have played into the theory that Vision’s body is somehow being used to construct the fake reality that he and Wanda are living in.

The first three episodes of WandaVision are available to watch on Disney Plus.


MORE : WandaVision: We finally have some huge answers about Teyonah Parris’ Monica Rambeau at end of episode 3


MORE : WandaVision episode 3 might have marked the beginning of a new supergroup in the MCU