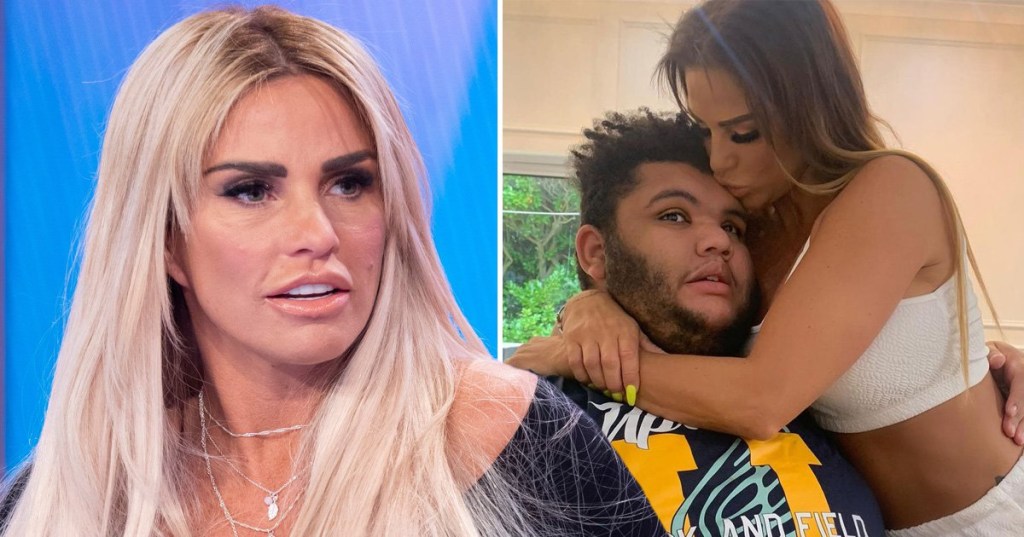 Katie Price is said to be ‘over the moon’ as the police are reportedly ‘moving forward’ with a case against an online troll who targeted her son Harvey.

A man, who was arrested in November last year, used blackface and appeared to mock Harvey in the video before it was taken down.

Katie, 42, shared the video, which saw a woman pretending to be her say: ‘If somebody says something horrible to Harvey, what do we say?’

A man in blackface then responded: ‘Hello you c**t’, as the woman said to him ‘Harvey!’, imitating a TV appearance where Harvey accidentally swore.

According to The Sun, the case is ‘moving forward’ and Katie has been contacted to give evidence in court.

An insider told the publication: ‘Katie is pleased the case is moving forward and action is being taken – it’ll show people that there are real consequences to internet trolling.’

At the time, Sussex Police told The Sun that a man had been arrested ‘on suspicion of sending by public communication network an offensive / indecent / obscene / menacing message.’

Katie’s rep reportedly told the site: ‘Katie will be delighted to hear that the person responsible is being held accountable by the Police for their actions – we do hope a prosecution is made.

‘Katie – with her supporters – will continue her fight to ensure Harvey’s Law is passed in Parliament this year in stamping out trolls and social media bulling of all kinds.

‘If this means that Katie has to take on the social media companies for providing the platforms to these trolls, she will.’

The mum-of-five has been fighting over the past few years to have ‘Harvey’s Law’ passed, which would make online abuse a criminal offence.

She is calling for trolls to be identified and ‘named and shamed’ by being put on a register, which could be accessed later in people’s lives, for instance when they apply for a job.

Katie told the Commons Petitions Committee in the summer about the memes that have been made of her son, who has Prader-Willi syndrome and is autistic and partially blind.

She explained: ‘Because Harvey does say these funny, witty, things, they turn it into videos and they’re laughing at him, not with him and this is the difference.’

Metro.co.uk has contacted Sussex Police and reps for Katie Price for comment.